Find out how these stocks bucked the big downward move in the markets.

Monday was a bad day on Wall Street, as major benchmarks generally fell 2% to 3% compared to where they started the week. Poor news from the technology sector weighed on overall sentiment, and investors also seemed concerned about the potential macroeconomic impacts from a rising U.S. dollar compared to many foreign currencies. Yet even with the broader market facing headwinds, some stocks were able to post solid gains. Athenahealth (ATHN), Apptio (NASDAQ: APTI), and Opko Health (OPK 0.38%) were among the best performers on the day. Here's why they did so well.

Athenahealth finally gets its buyout bid

Shares of Athenahealth jumped nearly 10% after the healthcare company accepted a $5.7 billion bid from two hedge fund investors. Veritas Capital and Elliott Management's Evergreen Coast Capital said they would pay $135 per share in cash to Athenahealth shareholders, with the intention of combining the purchased company with related healthcare assets that the institutional investors had acquired from General Electric earlier in 2018. For investors, the news was welcome following Athenahealth's decline despite good earnings results late last week, but some won't be happy that they weren't able to receive the higher $160-per-share amount that Elliott had offered during the spring before subsequent due diligence caused Elliott to hit the pause button. 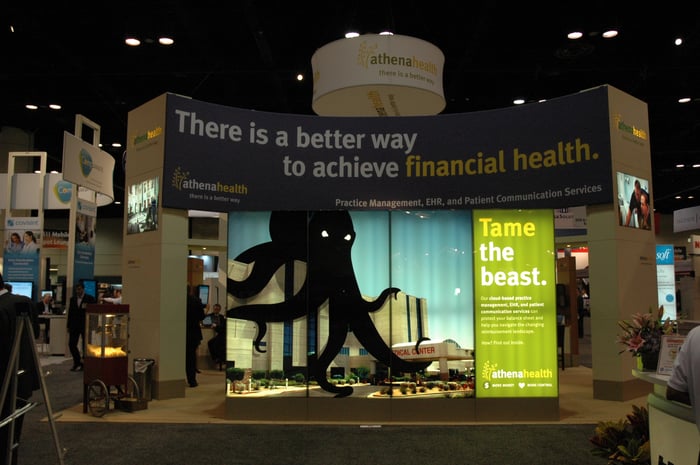 Elsewhere in the mergers and acquisitions space, Apptio stocked soared more than 50% after private equity company Vista Equity Partners made a deal to acquire the enterprise software company. Under the terms of the deal, Apptio shareholders will receive $38 per share in cash, valuing the company at about $1.94 billion. CEO and co-founder Sunny Gupta attributed the deal to Apptio's success in "building the next great cloud software platform by dedicating ourselves to helping companies of all sizes and industries manage, plan, and optimize technology investments across their hybrid IT environments." With demand for cloud computing at extremely high levels, it's no surprise to see Apptio join the ranks of acquisition targets in the industry.

Finally, shares of Opko Health finished higher by 20%. The diagnostics and pharmaceutical company's third-quarter financial results seemed lackluster at best, with revenue rising by just 1.5% from year-earlier levels and the company still posting a loss for the period. Yet Opko made positive comments on the ramping-up of its Rayaldee treatment for secondary hyperparathyroidism for chronic kidney disease patients, and clinical trials continue for other candidate treatments. Investors are still nervous about the future of the company given recent SEC charges against its CEO, but the lack of a collapse in fundamental performance was encouraging.