The company has snagged Sunlight Supply, a distributor of hydroponics products and related goods.

Although Scotts Miracle-Gro (SMG -2.56%) is a traditional gardening-supply company in many respects, over the past few years, it's been associated with the limited number of marijuana stocks available on the market.

That association will only deepen with the ambitious company's latest asset buy. Let's wander into the greenhouse to take a look at Scotts Miracle-Gro's latest harvest. 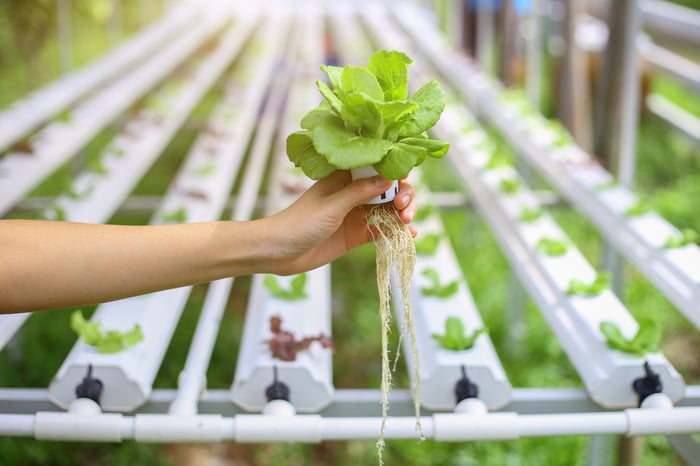 Scotts Miracle-Gro recently signed an agreement to purchase Sunlight Supply. The privately-held company is a distributor of gardening supplies, taking the No. 1 slot in the segment of U.S. hydroponics (goods used to grow crops in water, without soil). Hydroponics have been a popular means to grow cannabis for many years.

Scotts Miracle-Gro is paying a total of $450 million for Sunlight Supply, $425 million in cash and the remainder in equity. When the deal closes, Sunlight Supply will be folded into its new owner's Hawthorne Gardening unit -- the division that holds its hydroponic assets, as well as other goods associated with marijuana cultivation.

The company said that Sunlight Supply and Hawthorne Gardening combined are expected to post annualized sales of roughly $600 million. That's more than double the latter unit's revenue figure for 2017.

In the press release heralding the deal, Scotts Miracle-Gro wrote that owning Sunlight Supply will give Hawthorne "a fully vertically integrated operating model that will ship directly to retailers, providing unmatched capabilities in the industry." It added that the acquisition should "make Hawthorne the preferred distributor for the majority of other manufacturers in this space."

Scotts Miracle-Gro is anticipated to take a one-time hit to earnings because of the acquisition, by $0.30 to $0.40 per share on an adjusted basis in the current fiscal year. However, due to synergies between the two units (Sunlight Supply already sells a range of Hawthorne Gardening products), the parent company aims to save at least $35 million per year. This should help add $0.60 to $0.80 to adjusted earnings per share in fiscal 2019.

Prior to the Sunlight Supply deal, Scotts Miracle-Gro anticipated it would book adjusted earnings of $4.60 to $4.80 per share this fiscal year. On average, analysts were projecting $5.01 for 2019.

The deal is subject to approval from the relevant regulators. Scotts Miracle-Gro expects it to close by the beginning of June. The company said the cash portion of the buy will be financed through an existing credit facility.

The Sunlight Supply deal is a classic vertical integration move by Scotts Miracle-Gro. It's a logical expansion of the Hawthorne Growth business, adding a muscular distribution arm to the unit.

Scotts Miracle-Gro's stock traded down a bit in the wake of the news, which to some degree is understandable. Earlier this year, the shares got chopped when the company released first quarter results that were disappointing -- even by the modest expectations for the historically losing quarter.

Among these disappointments was the performance of Hawthorne Growth. Although its headline sales for the period increased by 20% on a year-over-year basis to almost $77 million, the jump was due to acquisitions. Perhaps investors are worried that the Hawthorne plant has reached full flower, hence the scramble for sales-lifting assets to add to it.

I don't think this concern is warranted. Hawthorne/Scotts Miracle-Gro is operating in an environment that is only tentatively opening up for its business. In spite of the great strides made lately in this country, marijuana cultivation and use is still illegal at the Federal level -- and ditto for many states in the union. Only a handful of states have legalized it for recreational, as well as medicinal, use.

That's almost certain to change, as local governments -- and hopefully the Federal administration -- realize the tax revenue-generating potential of this popular plant. With the (eventual) liberalization of the industry, a solid picks-and-shovels play like Scotts Miracle-Gro should benefit accordingly.

Hawthorne Growth quickly is becoming a critical part of this aspect of the company's business. That nearly $77 million in first quarter sales comprised more than one-third of Scotts Miracle-Gro's overall total for the quarter. That's quite an ascent for a division that was formed less than four years ago. By continuing to build on it, the company is doing a good job positioning itself for a bright green future.