Please ensure Javascript is enabled for purposes of website accessibility
Log In Help Join The Motley Fool
Free Article Join Over 1 Million Premium Members And Get More In-Depth Stock Guidance and Research
By Lou Whiteman – Apr 27, 2018 at 8:15AM

With its restructuring now behind it, Allegheny is positioned to benefit from increasing demand for its metals and alloys.

Shares of specialty materials manufacturer Allegheny Technologies (ATI 3.99%) lost nearly three-quarters of their value in the second half of 2015 as the company initiated what would be a difficult restructuring. But it is growing apparent that the turnaround program had the desired effect, as Allegheny on April 24 delivered quarterly results that blew past expectations.

Allegheny gained almost 7% after its earnings report on a big down day for the S&P 500, a sign that investors are finally beginning to take notice. But given the company's strong outlook, and its exposure to the still-vibrant aerospace sector, there is ample reason to believe it isn't too late to buy into Allegheny's turnaround story. Allegheny reported adjusted earnings per share of $0.32, besting the consensus estimate of $0.24 per share on revenue of $979 million, up 13% year over year and $42 million above analyst expectations. The company's high-performance-materials unit drove the better-than-expected results, delivering sales up 10% year over year and margins, at 15.2%, a full 520 basis points above the same three months of 2017.

Allegheny benefited from strong demand from its jet engine component business, with revenue up 23% year over year. The company is capitalizing on its role as a supplier to the next-generation LEAP engine, developed by a joint venture between General Electric and Safran, with sales for LEAP and other new engine platforms up 65% from a year prior.

Allegheny CEO Richard Harshman on a call with analysts called 2018 a "transition year" as airlines and manufacturers move from the legacy CFM 56 engine and to the newer LEAP technology. And unlike General Electric or rival metals supplier Arconic, which have both warned they might end up with lower margins on the LEAP engine, Allegheny sees its results improving as the mix shifts to the newer technology.

Harshman said Allegheny is seeing "emergent demand above the contractual share" on certain parts, perhaps due to issues with rival engine programs, and said that increased demand could continue past 2018. The LEAP program has garnered more than 14,270 total engine orders and commitments since 2011.

Allegheny turned a corner in 2017, reporting slightly positive free cash flow after three years of draining cash. Management expects that trend to accelerate this year, estimating more than $150 million in free cash flow for the year. Considering the company bled through $259 million as recently as 2014, that forecast is a welcome sign for investors. 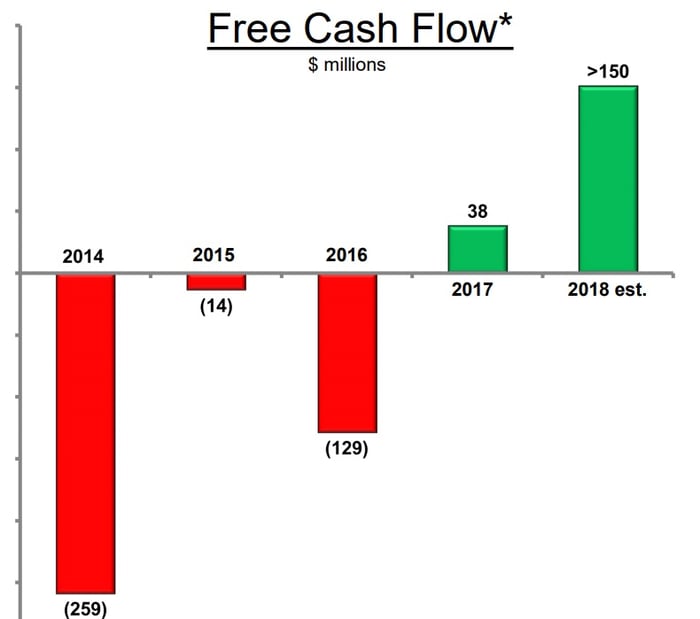 The company is still investing in growth, having spent $42 million in the first quarter largely to fund a new isothermal press at a Wisconsin forging center and capacity expansion at a joint venture facility in China.

Spending could increase further, but if it does, investors can take it as a sign that demand for metals is increasing. Harshman said Allegheny is in discussions with some of its customers about future demand to make sure it has the capacity to fill new orders.

Allegheny has about $1.6 billion in debt and doesn't currently have an investment-grade credit rating, but the company believes it can regain a top rating in the years to come.

Sanctions a nonstarter (for now)

One part of the bull case for Allegheny was knocked back during the company's conference call with analysts. There had been some hope the company might see a bump in orders due to U.S. threats to impose sanctions on Russian companies. Boeing has a long history sourcing much of its titanium from Russian giant VSMPO-Avisma, and the aerospace giant could be forced to send more business Allegheny's way if VSMPO's titanium imports are restricted.

That scenario could still play out, but it appears it would take actual sustained sanctions -- and not just the threat of action -- to move the needle. Allegheny said metals orders tend to come in two to three quarters ahead of delivery, so any shift toward favoring domestic production would take time to translate into increased sales. Harshman said that Boeing did build a buffer stock of titanium mill products last year, the last time Russian sanctions were threatened; that should still carry the aircraft manufacturer through for the time being.

Even if sanctions are put in place against VSMPO, investors should note that the upside for Allegheny is limited. Harshman said that VSMPO has some "unique capabilities" to make large forgings that his company cannot replicate.

Even after its post-earnings bounce, Allegheny still trades at less than one times sales, less than two times book value, and 20 times forward earnings estimates, trailing alloys rival Carpenter Technology and specialty materials company Hexcel on all counts. Allegheny shares, though up 52% over the past year, are still almost 40% below the highs reached in 2014 before the company's restructuring began.

The company's first-quarter results indicate that the restructuring went as intended, and with demand for LEAP engines strong, there are opportunities for growth even if Russian sanctions don't materialize. Allegheny's balance sheet and free cash flow are back to a point where the company can invest to capitalize on strong demand without taking on significant new debt.

Investors who bought in at the lows have already been rewarded for their faith that the turnaround would be successful. It isn't too late for new investors to jump in.