Please ensure Javascript is enabled for purposes of website accessibility
Log In Help Join The Motley Fool
Free Article Join Over 1 Million Premium Members And Get More In-Depth Stock Guidance and Research
By Dan Caplinger – Apr 27, 2018 at 9:50AM

Find out how the ETF provider turned things around.

Just like clothing in the fashion world, exchange-traded funds move in and out of style in investors' mind-sets over time. For many years, ETF provider WisdomTree Investments (WETF 0.31%) found itself on the cutting edge of the industry, with funds that took advantage of relationships between equity and currency markets in a way that produced huge returns for investors. When the favorable conditions that created that dynamic ended, WisdomTree had to decide how best to move forward as consolidation within the ETF industry threatened to leave the company behind.

Coming into Friday's first-quarter financial report, WisdomTree investors were hoping that the ETF provider would be able to generate some positive performance to show how well its portfolio can function even in an environment of higher market volatility. WisdomTree's results showed marked improvement from year-ago levels, and that should build some optimism among long-term investors that the company is getting itself into position to mount a more sustained turnaround despite having seen a decline in assets under management. 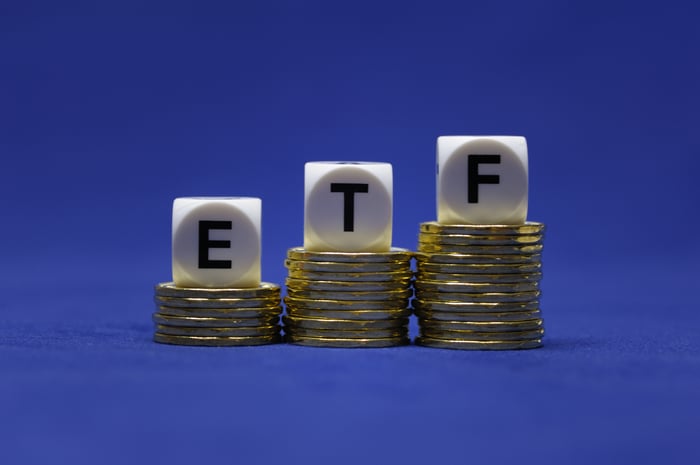 WisdomTree's first-quarter results were solid in light of the challenges facing the stock market. Total revenue was higher by 9% to $59.6 million, almost exactly matching what most of those following the stock were expecting. Net income of $9.4 million was up 37% from year-ago levels, and after making one-time allowances, adjusted earnings of $0.08 per share topped the consensus forecast among investors by $0.01.

The biggest benefit to WisdomTree's bottom line came from tax reform. Pretax net income actually fell 6% from year-earlier levels, reflecting cost increases that rose at a faster rate than revenue, which has been an ongoing challenge for the ETF provider. Yet tax expenses dropped by more than 40%, saving the company nearly $3.5 million and representing all of its improvement from the first quarter of 2017.

Adverse market trends showed up in WisdomTree's operating results. Assets under management among U.S. ETFs rose about 2% over the past 12 months to $42.9 billion, but that was down more than 8% over the past three months compared to their level as of the end of 2017. Market declines were responsible for almost half of the roughly $4 billion drop, but net outflows weighed to an even greater extent on the company's asset base. Average advisory fees also declined slightly as a percentage of assets, falling from 0.50% to 0.49%.

Growth internationally was more impressive, but even there, the market's nervousness showed up. In Europe, assets under management rose 29% year over year to $1.74 billion, due in part to the acquisition of ETF Securities late last year, but that figure was down more than $65 million in the past three months. The Canadian market continued to expand rapidly, with assets under management more than quadrupling in the past 12 months to $337 million as inflows remained solid despite the turbulent market.

What's ahead for WisdomTree?

CEO Jonathan Steinberg was positive. "We continue to see material improvement in our net flow breadth and depth," Steinberg said, "with diversified inflows into a record number of our U.S. funds." The CEO also noted that the company is working with more advisors than it ever has before in order to come up with solutions that can address their end-clients' investment needs.

Working with investment professionals could prove vital for WisdomTree's success. The company has expanded its distribution channels on multiple investment platforms in order to reach more advisors, and by offering performance track records and a portfolio construction tool that incorporates the latest technology, WisdomTree thinks that it should see more business.

Yet WisdomTree has still had to make strategic moves within its own fund lineup. In February, the company closed nine U.S. ETFs. That's a natural evolution in the business, but it still shows the challenges that WisdomTree faces in getting enough assets into funds to make them economically viable.

WisdomTree shareholders seemed generally pleased by the report, and the stock jumped 4% shortly after trading opened Friday morning following the announcement. To succeed in the long term, though, WisdomTree needs to go beyond tax relief to produce business gains based on fundamental improvement.