These stocks have the right stuff for investors approaching retirement or who are already there.

Some might think investors in their 60s should steer clear of stocks. And that's not entirely correct.

Sure, shifting some of your portfolio to less volatile investing alternatives like bonds makes sense. However, stocks should still be an important component of investment accounts for individuals in this age group. The big question, though, is: Which stocks to buy? 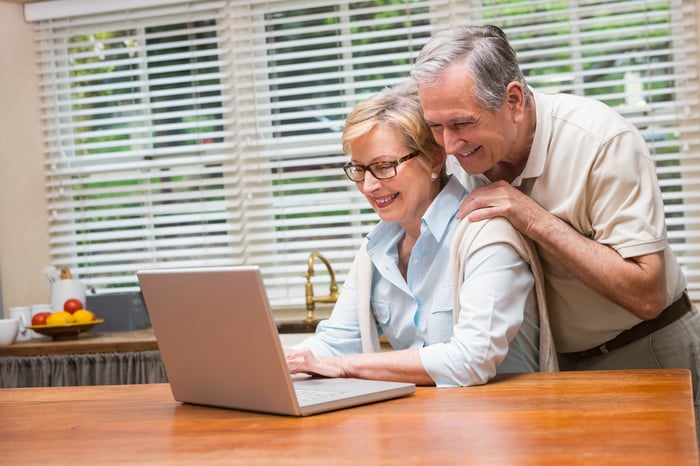 You might be surprised for Google parent Alphabet to make the list since the stock doesn't pay a dividend. But while it's great to have solid dividend stocks in your portfolio (and we'll get to two of them shortly), stocks of companies with strong moats and excellent growth prospects should be included as well. Alphabet checks off both of those boxes in a big way.

All of those ads you see on Google search engine, Gmail, Google Maps, Google Play, and YouTube generate most of Alphabet's revenue. Do these revenue sources enjoy strong moats? Yep. The various Google websites claim a 63% search engine market share, higher than the share a decade ago despite well-funded competition. Alphabet continues to invest in research and development to make searches increasingly better. As a result, the company's enormous cash flow should be pretty secure.

Alphabet uses the cash generated from its core businesses to invest in growth opportunities. The company lumps these opportunities into a business segment called "other bets." Some of these other bets are already making plenty of money. Alphabet's Nest home technology products, for example, generated $726 million in revenue last year. Others could be huge moneymakers down the road. I'd definitely put Waymo, Alphabet's self-driving car technology company, in that category.

Although Alphabet is a gigantic company now, it's a nimble giant. I think the stock has plenty of room for growth -- mainly because it has plenty of ways to grow.

Now for a great dividend pick. Iron Mountain's dividend currently yields over 7%. That's a better income stream than most bonds. Because Iron Mountain is organized as a real estate investment trust (REIT), the company must distribute at least 90% of its taxable income to shareholders in the form of dividends. But how reliable are those dividends? Thanks to Iron Mountain's business model, I'd say very reliable.

Iron Mountain is the world's largest provider of records and data storage. The company has been in business for 67 years. It has 87.5 million square feet of storage space in more than 1,400 facilities. Iron Mountain has over 225,000 customers in 53 countries, including 95% of the Fortune 1000.

Those customers tend to stay with Iron Mountain, too. There's no other company with the credentials that Iron Mountain has. Plus, it's a huge headache to transfer records and data that are in storage to another vendor.

While Iron Mountain's dividend is its main draw, the company has pretty good growth prospects as well. There are lots of growth opportunities in emerging markets. Iron Mountain has also expanded into the lucrative data-center business.

It's hard to top Iron Mountain's dividend yield. And Pfizer doesn't. But the big pharma company does pay a dividend yielding nearly 4%. That's certainly a level of income that few investors would turn down.

Pfizer's dividend is also one you can depend on. The company recently paid out its 317th consecutive quarterly dividend. If you're in your 60s, you're at least 10 years younger than Pfizer's dividend program.

I think Pfizer is also entering a period of solid growth. The pharmaceutical company has struggled somewhat over the last few years because of loss of exclusivity for several of its drugs. But Pfizer is steadily getting past that overhang with the help of fast-growing newer products like anticoagulant Eliquis and cancer drug Ibrance.

Pfizer also has its best drug pipeline in years. Between 2005 and 2010, the company rolled out only two blockbuster drugs. From 2011 through 2016, Pfizer launched five blockbusters. Thanks in large part to its extensive network of partners, Pfizer thinks over the next five years it will introduce up to 15 new drugs or new indications for existing drugs with the potential for annual sales of $1 billion or more.

I really like Alphabet, Iron Mountain, and Pfizer -- and not just for investors in their 60s. I'm years away from hitting my sixth decade, but I own two of these stocks myself. Keep in mind, though, that these three stocks are just a start. You'll want to have more stocks in a balanced portfolio.

Alphabet, Iron Mountain, and Pfizer exemplify the kinds of stocks you should seek. Look for stocks with strong moats and solid growth prospects. Lean toward companies that pay reliable dividends with attractive yields. That should be a winning formula over time.