Please ensure Javascript is enabled for purposes of website accessibility
Log In Help Join The Motley Fool
Free Article Join Over 1 Million Premium Members And Get More In-Depth Stock Guidance and Research
By Tyler Crowe – Updated Apr 30, 2018 at 10:23AM

Management is already buying back shares at a decent clip to reward shareholders for years of weak oil prices.

Total (TTE -0.28%) has been doing its absolute best to put forth a value proposition that would attract investors. This past quarter, that value proposition came into focus as the company posted another quarter of improving results and management started to reward shareholders with a rising dividend and share repurchases.

Looking at the headline numbers, though, you might not think that was the case. So let's dig through the results for the first quarter and see what happened at Total.

As can be the case with large oil companies like Total, there were a lot of wonky numbers in this most recent earnings report that obfuscate the underlying strength of the business. Even though the company did report a lower net income result this past quarter, it was largely due to some one-time sales gains in the prior-year period that boosted the bottom line. Adjusting for asset sales, its net income result was 13% higher than this time last year.

Almost all of those gains came from, unsurprisingly, Total's exploration and production segment, which grew earnings 58% year over year. The average realized prices for its oil and gas were $60.3 a barrel and $4.73 per million BTU, respectively. Those are a far cry from the numbers we saw this time last year. Also, the higher crude prices led to lower margins for its refining and chemicals results. 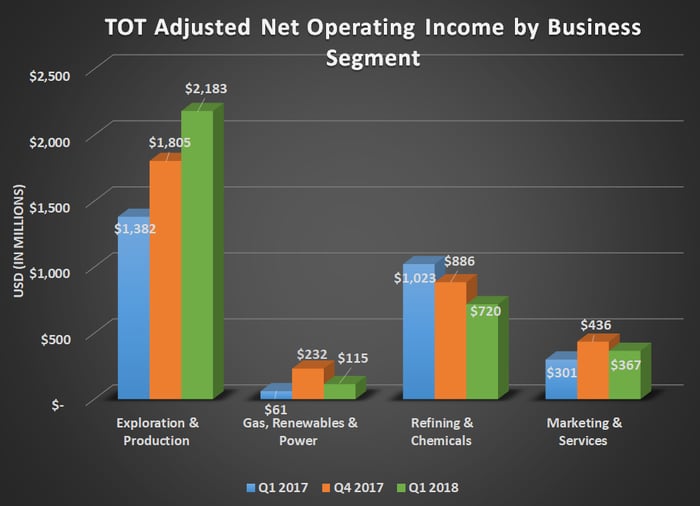 The other number that looks a little off in these results is operating cash flow. One would assume that higher revenue and earnings would result in higher cash flow, but the company had a massive working capital build in the quarter -- $3.2 billion more than the prior year -- that kept cash flow weak. Typically, Total benefits from reductions in working capital in the second half of the year. As a result of the weaker cash flow numbers, net debt to capital increased to 15.1%, which is still a very healthy number. 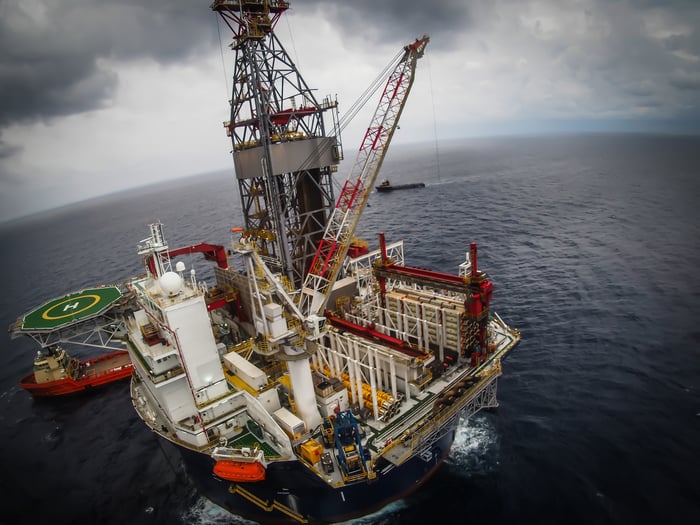 Here's CEO Patrick Pouyanne on the company's results and some of the initiatives management has put in place to enhance shareholder value:

[T]he Group's adjusted net income and DACF [debt adjusted cash flow] continued to increase, achieving growth of 13% and 16%, respectively, compared to a year ago, in line with announced sensitivities. Cash flow after organic investments increased to $2.8 billion, up by more than 50% from a year ago, thanks to good operational performance and continued spending discipline. Return on equity was 10%.

In line with the shareholder return policy announced in February, the Group is raising the first 2018 interim dividend by 3.2%. Scrip [dividend] shares issued ... were bought back to prevent any dilution. In addition, the group bought back a further $300 million of shares to return to shareholders [as] part of the benefit realized from higher oil prices. 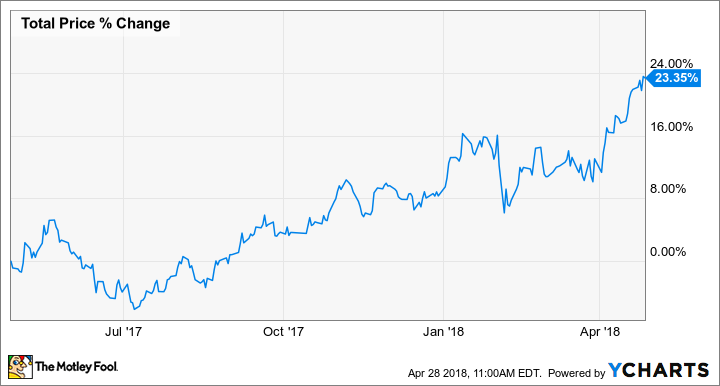 It can be easy to get caught up in the headline numbers when a company reports results, but Total's most recent earning report is an example of a time when investors need to look beyond earnings per share to see what's going on with the business. With several acquisitions closing in recent months and relatively high oil prices lately, investors should expect results to improve through the rest of the year. If management holds to its promise about repurchasing shares when oil prices exceed its projections, then we should also expect more significant repurchases this year.