Last Tuesday, JetBlue Airways (NASDAQ:JBLU) reported strong results for the first quarter of 2018. Earnings per share reached $0.27, up from $0.24 a year earlier, even though the price of jet fuel surged 24% year over year. Revenue rose 9.6% to $1.75 billion. 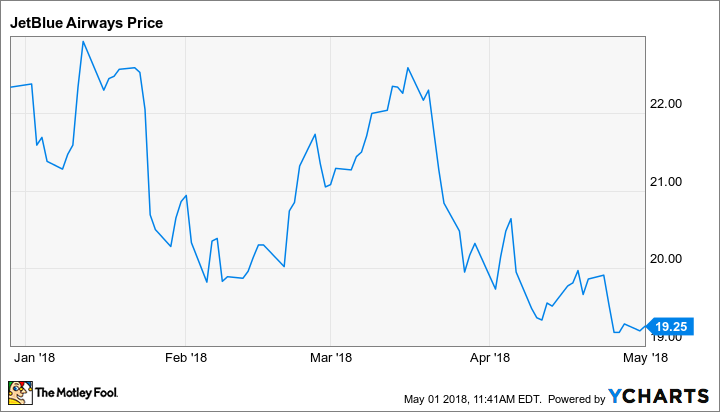 The main reason for this poor reaction by investors was that JetBlue's second-quarter guidance implies a steep pre-tax margin decline of about 10 percentage points. Yet JetBlue is primed for a return to strong EPS growth in the second half of the year. This could drive huge gains for JetBlue Airways stock.

Easy year-over-year comparisons are partially responsible for this abrupt change in JetBlue's cost trajectory. JetBlue incurred high costs in the second half of 2017 due to air traffic control delays, hurricanes, and a one-time employee bonus to celebrate tax reform. That said, even without the easy comparisons, JetBlue's underlying non-fuel unit cost growth would be close to zero in the second half of 2018.

JetBlue has plenty of additional cost savings levers to keep non-fuel unit costs roughly flat over the next few years. The company is making progress on a multiyear program to reduce structural costs by $250 million to $300 million annually. Additionally, JetBlue just began carrying out a long-delayed plan to add 12 seats to each of its 130 Airbus A320s. This will reduce unit costs by spreading fixed costs over more seats.

JetBlue plans to add 12 seats to each of its Airbus A320s. Image source: JetBlue Airways.

Limiting non-fuel unit cost growth is extremely important, but with oil prices on the rise, JetBlue also needs unit revenue increases to maintain or expand its profit margin. Fortunately, while revenue per available seat mile (RASM) is set to decline modestly in the second quarter, JetBlue is in good shape to get unit revenue growing again thereafter.

First, JetBlue's second quarter outlook includes a 3.75 percentage point negative impact from the timing of Easter and a one-time credit card incentive payment received in Q2 2017. Second, the carrier has experienced very strong peak demand, which bodes well for the summer -- and for the Thanksgiving and Christmas travel periods later this year.

Third, JetBlue recently made the tough decision to cut about a third of its flights at Long Beach Airport, its smallest and worst-performing focus city. After Labor Day, it will reallocate that capacity to more promising transcontinental routes from its New York and Boston hubs.

Looking a little further ahead, JetBlue is still analyzing potential changes to its fleet. First, it has the right to convert Airbus A321neo deliveries to that plane's long-range variant. Airbus says that the A321LR will be able to fly up to 4,000 nautical miles. That would allow JetBlue to offer its popular Mint premium service on transatlantic routes from New York and Boston to points throughout Western Europe.

JetBlue would have to write down the value of its existing E190 fleet if it decided to accelerate their retirement. However, the long-term savings should easily justify taking that hit. The main thing JetBlue needs to do to unlock this source of savings is to decide between competing offerings from Embraer (E2-series E-Jets) and Bombardier/Airbus (CSeries jets).

JetBlue stock currently trades at a bargain price of a little more than 10 times earnings. That leaves tons of upside for long-term investors if the company capitalizes on its numerous long-term profit growth opportunities.