Please ensure Javascript is enabled for purposes of website accessibility
Log In Help Join The Motley Fool
Free Article Join Over 1 Million Premium Members And Get More In-Depth Stock Guidance and Research
By Rich Duprey – Updated May 1, 2018 at 3:51PM

This Chinese digital music subsidiary could be the fourth largest tech IPO ever.

If you thought Spotify (SPOT -3.36%) going public was a big deal for streaming music, wait till you get a look at Tencent Music Entertainment (TME), the digital music subsidiary of Chinese tech giant Tencent Holdings (TCEHY -2.33%).

In an IPO planned for U.S. stock exchanges later this year, The Wall Street Journal (subscription required) reports, the music streaming service could be valued at as much as $25 billion, making it potentially one of the biggest-ever tech public offerings.

Here's what you need to know before making an investment in TME. 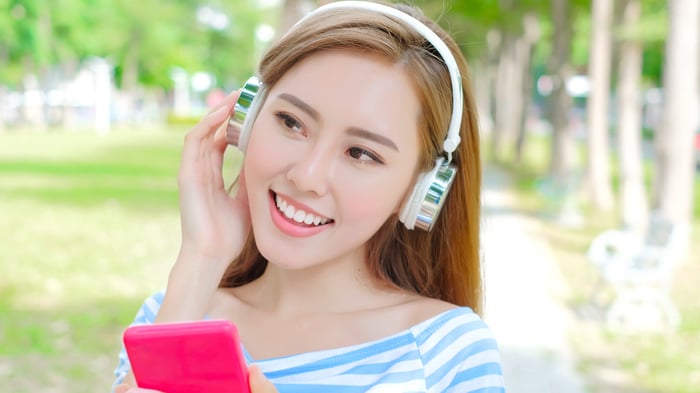 The valuation is multiplying

An IPO by Tencent Music has been anticipated for months, and that has apparently caused the valuation estimates of the business to rapidly multiply. Late last year, TME was valued at $10 billion, and then when Spotify and Tencent Holdings took a minority stake in each other --Spotify got 9% in TME, and Tencent a 7.5% stake in Spotify -- it implied a $12.5 billion valuation for Tencent Music.

Now, with the looming IPO, a $25 billion price tag has been placed on it based on recent private transactions. If TME hits its reported price target, it will be the fourth largest tech IPO of the last decade, placing it just ahead of Snap and Twitter with $24 billion valuations, and behind Alibaba ($167 billion), Facebook ($104 billion), and JD.com ($25 billion).

A lot was made over Spotify's 160 million active users, half of whom pay a subscription fee of $10 per person per month or $15 per family (up to six people). Tencent blows those numbers away.

Through a network of streaming music platforms that includes QQ Music, KuGou, and Kuwo, TME's combined monthly active user base is around 700 million, some 120 million of whom pay to stream or buy music. It's estimated that through its combined services, TME owns around three-quarters of the Chinese music streaming market.

And though, like Spotify, TME competes directly against Apple, it doesn't have to worry so much about Alphabet, as Google is blocked in China, making the Chinese music market much more insular and protected from outside influences.

Moreover, because it has exclusive deals with Sony Music, Universal Music Group, and Warner Music Group, TME controls which songs its rivals can stream while at the same time supporting artists over media channels owned by its parent, such as WeChat, QQ, Tencent Video, and Qzone.

However, the Journal notes there are issues that also limit just how big Tencent Music might be able to grow. Citing PricewaterhouseCoopers estimates, the article said the entire music industry in China generated $480 million in revenue in 2016, up 13% from the prior year, but it might only be able to hit $900 million in revenue by 2021.

In comparison, the Recording Industry Association of America says the U.S. market is worth about $8.7 billion, suggesting that because TME already commands such large swaths of the market, unless it induces more people to pay for music or increases ad revenue, it might be constrained.

Tencent doesn't break out revenue and earnings of its subsidiaries but notes that its video and music businesses have contributed to the growth it's enjoyed. In 2017, video and music were largely responsible for the 22% increase in the fee-based value-added service subscriptions it witnessed, which hit 135 million.

The IPO of Tencent Music Entertainment isn't a sure thing for 2018, as its parent will only begin next month interviewing banks to underwrite what is expected to be a traditional stock offering, unlike Spotify's direct listing. And market conditions can change radically between now and the back half of the year.

But as the uncontested leader in the Chinese music streaming industry, whether TME will be worth what's sure to be a premium price for its stock remains unclear. Its parent is rolling out IPOs for its various units because it needs to generate returns for investors, and we'll likely see other divisions go public as well, though perhaps not all on U.S. exchanges. That means they might be good for Tencent, though not necessarily for the public.

So until we can examine more closely the financials of TME, it remains hard to tell whether $25 billion is a good valuation for the company or not. The market may indeed find that price level intriguing for a story as promising as this, but you might want to tune in after all the hype and excitement dies down before making a call on this stock.