On April 17, the U.S. Supreme Court heard the case South Dakota vs. Wayfair, Inc. While it seems like an unsexy, repeal-this-decades-old-tax-law case -- South Dakota would like to repeal a 1992 decision from the case Quill v. North Dakota -- the particulars could reverberate across the 48 states without "Dakota" in their names. And small vendors who use sites like Etsy could bear the brunt of the court's decision.

The Quill decision ruled that companies only had to collect sales tax in the states where they are physically located. Therefore, orders placed by mail to companies in other states didn't have to add sales tax. This decision was made well before the explosion of e-commerce, which is still in its early stages. U.S. e-commerce sales hit $450 billion in 2017, according to the U.S. Census Bureau, accounting for only about 9% of total sales.

South Dakota is arguing that e-commerce costs it up to $50 million annually in uncollected tax revenue. That number may be very conservative: The U.S. Government Accountability Office reported that state and local governments could have taken in up to $13 billion in taxes on remote sellers in 2017 if the rules were different, while a 2009 study out of the University of Tennessee, updated in 2012, estimated that the states lose approximately $17.4 billion in revenue annually thanks to uncollected sales taxes.

States are eager to collect sales taxes on their residents' purchases because sales taxes account for 31.5% of a state's tax revenue, on average, and the continuing growth of e-commerce cuts into bricks-and-mortar sales and the taxes revenue those generate. Forty-five U.S. states have statewide sales taxes.

Etsy (NASDAQ:ETSY) is one of the companies that has filed a brief supporting current regulations, which don't make its sellers collect taxes from mos of their customers.

Etsy CEO Josh Silverman says that if vendors have to charge sales tax, it won't be a matter of dealing with just 50 different state sales tax rates as there are an estimated 10,000 different sales tax jurisdictions in the U.S. with rules that don't all match. For instance, is an item considered candy or a baked good? The taxes will differ. Is there a tax holiday where the shopper is located on the day they place their order? 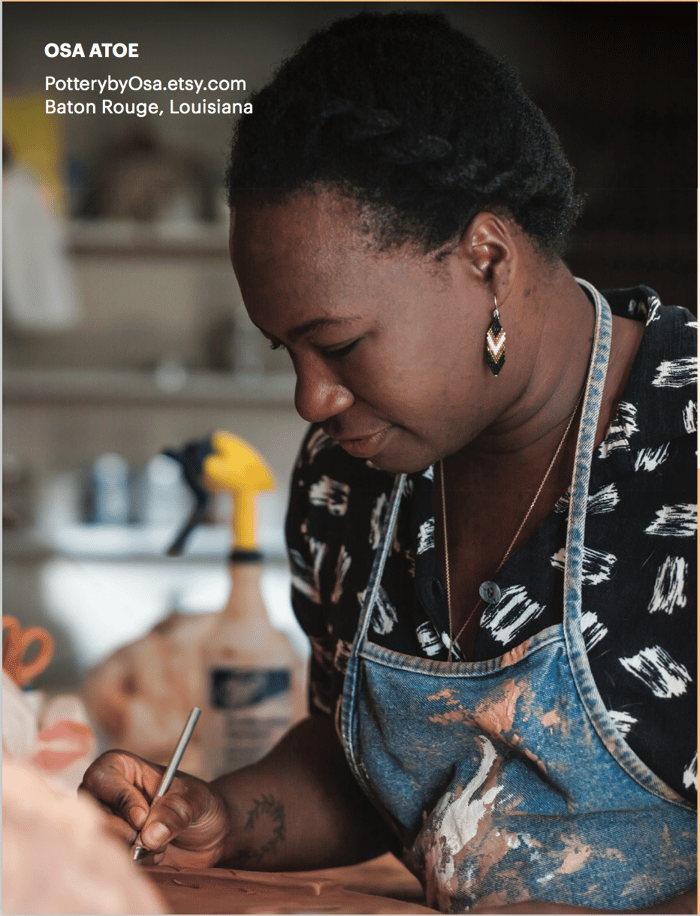 New Orleans potter Osa Atoe, featured in the Etsy annual report, is among the 1.9 million Etsy sellers who could be affected by the South Dakota ruling. Image source: Etsy.

"... there is a really unmanageable number of jurisdictions for which no small seller could truly comply," Silverman said in a Bloomberg television interview.

Small sellers -- Silverman positioned them as "microbusinesses" -- might get out of the e-commerce business altogether if they have to collect taxes. He said Etsy is "going to have the backs of our sellers" with tools and education, but that may not be enough to persuade people to maintain the microbusinesses.

Etsy defines a microbusiness as one that employs 10 or fewer people. It claims in its 2017 seller census that almost all U.S. Etsy sellers (97%) run their shops from home and more than three-quarters (77%) are one-person operations.

But maybe good news for Etsy

However, while individual businesses might be deterred by any changes to current tax law, the repeal of Quill might actually boost Etsy's bottom line if the company decides to sell more tax-advice services to its customers. The company makes 59% of its revenue from seller services. As of right now, that includes advertising-driven services (paid placement, Google ads), shipping, and payment processing. If the company were to add "tax advice" and "tax compliance" as services, or include them in a revamped tier of services for Etsy Payments -- which 50% of Etsy's 1.9 million sellers use -- then that might lead to a new revenue opportunity.

Anyone looking to invest in Etsy would do well to keep an eye on how this lawsuit plays out and how Etsy is able to work with its customers through any transition.