Please ensure Javascript is enabled for purposes of website accessibility
Log In Help Join The Motley Fool
Free Article Join Over 1 Million Premium Members And Get More In-Depth Stock Guidance and Research
By Keith Speights - May 1, 2018 at 3:01PM

Why the big drugmaker reported a revenue miss but an earnings beat in the first quarter.

It seems every time Pfizer (PFE -0.23%) reports its quarterly results, good news is accompanied by bad news. That was the case yet again when the big pharma company provided an update on its first-quarter performance.

Pfizer announced its 2018 Q1 earnings results before the market opened on Tuesday. While the company beat earnings expectations, revenue came in a little lower than projected. What happened? 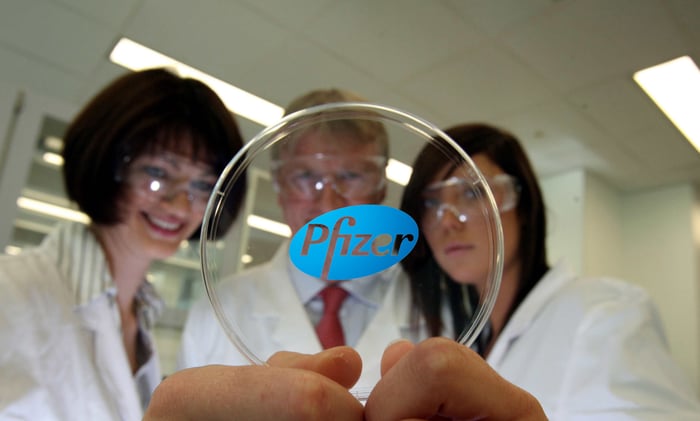 First, the bad news: Pfizer reported revenue of $12.91 billion. That was a meager 1% increase from the prior-year period. It was also well below the $13.15 billion in revenue expected by Wall Street.

Pfizer's innovative health segment, which includes the company's relatively newer prescription drugs and all consumer healthcare products, posted revenue of $7.83 billion. This total reflected a 6% year-over-year jump. However, the essential health segment, which includes older drugs, biosimilars, and sterile injectables, generated Q1 revenue of $5.08 billion -- a decline of 5% from the prior-year period.

The good news for Pfizer came from the company's bottom line. Pfizer reported GAAP net income of $3.56 billion. This reflected a 14% year-over-year increase. The company announced adjusted earnings per share (EPS) of $0.77, up 12% over the prior-year period. The average analysts' estimate for Q1 adjusted EPS was $0.75.

Let's start with the revenue miss. Before Pfizer's Q1 earnings release, I had predicted continued momentum for the company's top three drugs -- Ibrance, Eliquis, and Xeljanz. I expected Ibrance to keep going strong despite new competition. Eliquis seemed to be on a tear that wouldn't slow down. And I thought that Xeljanz could get a boost from its December approval of a new indication.

All three of those things happened to a large extent. Sales for Ibrance, Eliquis, and Xeljanz jumped 37%, 35%, and 30%, respectively, compared to the prior-year period. However, two of the three drugs didn't perform as well as Wall Street analysts expected they would.

Analysts polled by Thomson Reuters estimated that Ibrance would generate Q1 sales of nearly $957 million. The actual Q1 sales figure for the breast cancer drug was $933 million. Why such a discrepancy? Probably because rival drugs performed better than analysts thought they would.

First-quarter sales for Xeljanz totaled $326 million, well below the nearly $399 million expected by analysts. My guess is that analysts expected a faster launch of the drug in its new indication, psoriatic arthritis.

It's easy to spot the reason behind Pfizer's big jump in earnings. The company paid 32% less in taxes than it did in the prior-year period, thanks primarily to U.S. corporate tax reform.

Should investors be worried about Pfizer's mixed results in Q1? I don't think so. The company reaffirmed the full-year 2018 guidance that it had previously provided. Pfizer is still looking to generate revenue between $53.5 billion and $55.5 billion, with adjusted EPS of $2.90 to $3.

Remember, too, that the biggest challenge for Pfizer isn't that Ibrance and Xeljanz didn't produce sales growth as high as Wall Street wanted. The company's primary issues are from continued product shortages with its sterile injectables business and declining sales for older drugs that have lost exclusivity. Both of these issues, though, are temporary.

Pfizer thinks that it will "make significant progress" in addressing the sterile injectables issues this year. The company also projects that the negative financial impact from loss of exclusivity for several drugs will decline over the next few years.

Ian Read, Pfizer's chairman and CEO, said that the company's pipeline is "as deep and focused as it has ever been." I don't think he's exaggerating. In particular, I think Pfizer is doing a better job at partnering to build its pipeline.

It's likely that Pfizer will continue to have quarters with mixed results for a while. Over the long run, though, my view is that the pharma stock will generate solid returns for investors, especially with its attractive dividend factored in.