Please ensure Javascript is enabled for purposes of website accessibility
Log In Help Join The Motley Fool
Free Article Join Over 1 Million Premium Members And Get More In-Depth Stock Guidance and Research
By Leo Sun – May 1, 2018 at 10:06AM

Is Amazon forcing Walmart to make a desperate move in India?

Walmart (WMT -1.93%) and Amazon (AMZN -1.57%) often trade blows in the U.S. market, with the former scaling up its e-commerce and delivery options to counter the latter's growth. However, Walmart and Amazon's rivalry also extends into overseas markets like India, where the two retailers are both attempting to buy Flipkart, the country's top homegrown e-commerce player.

Flipkart, which was founded by two former Amazon employees in 2007, is the second most popular e-commerce site in India after Amazon according to three independent platforms cited by VCCircle earlier this year. Walmart has a much smaller presence in India, with only 20 superstores operating under its Best Price banner.

Walmart wants to acquire Flipkart to counter Amazon's growth. Walmart held private talks with Flipkart over the past two years according to Reuters, with earlier reports suggesting that Walmart wanted a 15% to 20% stake in the company. However, recent reports indicate that Walmart now wants to buy a 55% stake in Flipkart for about $12 billion.

All of Flipkart's top investors, which include Japanese telco SoftBank (SFTB.Y -1.40%) and hedge fund Tiger Global Management, approve of Walmart's offer. That's likely because Softbank and many other Flipkart backers -- like Tencent, Microsoft, and eBay -- aren't keen on helping Amazon conquer the Indian market.

Moreover, the combination of the two largest e-commerce marketplaces in India could also be blocked by regulators on antitrust grounds. But Amazon is still reportedly in the running, with Flipkart's board keeping it on as an alternative suitor if the talks with Walmart fall apart. 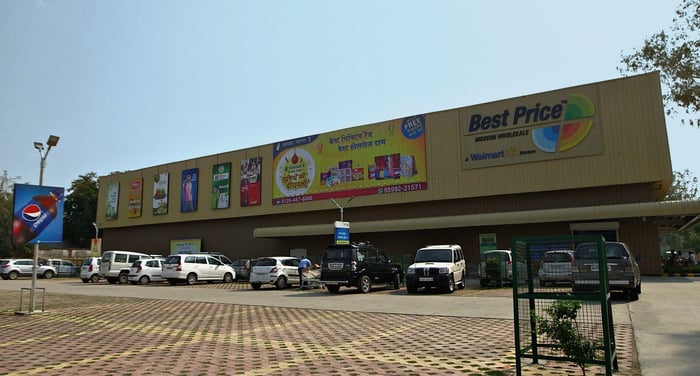 However, those international revenues only accounted for 24% of Walmart's top line during the quarter. Walmart's major overseas markets include Latin America, the UK, Japan, and China.

India could also overtake Japan as the world's third-largest economy by 2027 according to a recent report from The Economist Intelligence Unit. That growth, which will be supported by the country's expanding middle class, could make the Indian market as attractive as China today. Therefore it's essential for companies like Walmart and Amazon to plant roots in India before the economy takes flight.

But is Walmart overpaying for Flipkart?

Walmart might take control of Flipkart, but $12 billion is a steep price for an unprofitable company that generated $3 billion in revenues last year. That's also a much higher figure than the $5 billion Amazon committed to the Indian market nearly two years ago.

Flipkart's revenue rose 29% last year (down from 50% in 2016), but its losses widened by 68% to $1.3 billion. That wobbly business model caused Flipkart's private valuation to fall from $15.2 billion in 2015 to $11.6 billion last April. However, SoftBank's Vision Fund subsequently repurchased shares from Flipkart's employees and investors, boosting its total valuation back to between $17 billion to $19 billion.

Based on those facts, it's easy to see why Flipkart is eager to sell, but it's tough to see why Walmart is in such a rush to buy. Walmart is already spending billions on the expansion of its e-commerce ecosystem, renovations at its stores, and other initiatives. Therefore, $12 billion seems like a pricey way to set up shop in India, especially given the company's $18.3 billion in free cash flow over the past 12 months.

I understand why Walmart wants to expand its presence in India, but spending $12 billion to take control of Flipkart seems like a desperate and drastic move. Flipkart's losses could keep widening as it competes against Amazon, and it'll take a lot of work to make the platform profitable.