Please ensure Javascript is enabled for purposes of website accessibility
Log In Help Join The Motley Fool
Free Article Join Over 1 Million Premium Members And Get More In-Depth Stock Guidance and Research
By Tyler Crowe - May 2, 2018 at 3:04PM

After ending 2017 on quite the high note, BP (BP 3.18%) kept the good times rolling: It beat Wall Street's expectations for another quarter, and promised to deliver another round of capital projects that will significantly boost production in 2018. With oil prices on the rise and BP's other businesses performing surprisingly well, this year promises to be an encore performance for investors.

Here's a look at BP's most recent earnings results, and what investors can expect from the oil giant in the upcoming quarters.

As is the case with most big oil companies in the first quarter, BP's cash flow numbers look surprisingly light compared to the gains it made in net income. As management noted, it's a product of building up a lot of working capital in the business that tends to wind down in the second half of this year. Adjusted for working capital, BP's cash flow was closer to $7 billion.

With oil prices on the rise, it's really no surprise that BP's income results are following suit. Pretty much all the gains in net income came from the upstream side of the business as both production and realized prices increased. What is surprising, though, is that the company's downstream earnings remained surprisingly consistent. Typically, earnings from downstream segments start to decline as oil and gas prices rise. 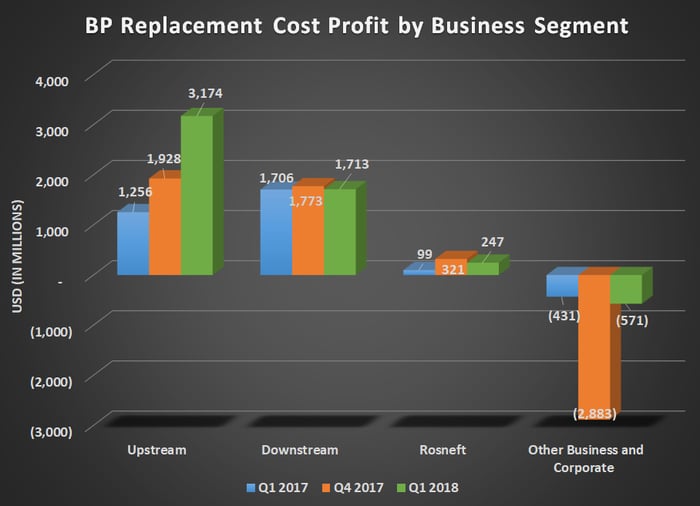 The reason BP was able to maintain downstream results was some unique investments that allow it to take advantages of different crude prices. Over the past few years, the company invested boatloads of money into its Whiting, Indiana refinery so it could process hard-to-refine oil sands out of Canada. The price of this particular type of crude has been declining lately, because supply is outstripping transportation and refining capacity. So even though feedstock prices, in general, are on the rise, BP can offset those increases with lower Canadian crude prices. 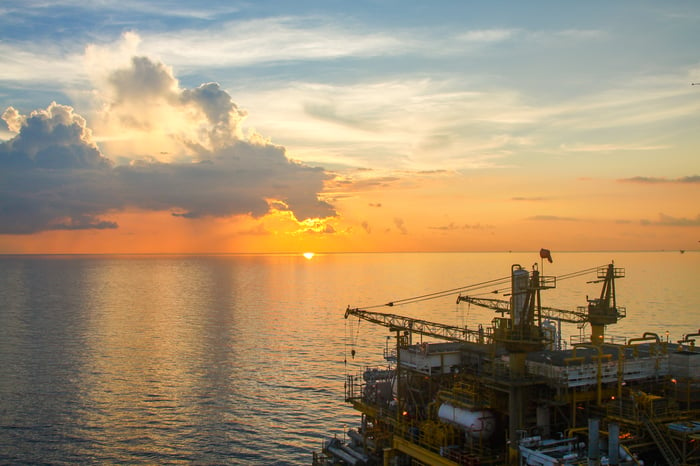 Oil prices have been on the rise in recent quarters, which may entice the people pulling the purse strings to start spending more on growing the business. According to CFO Brian Gilvary, though, BP plans to maintain spending discipline for a while longer:

With growing operating cash flow, we continue to expect the organic breakeven for the Group to average around $50 per barrel on a full dividend basis in 2018, reducing steadily to $35-40 per barrel by 2021 in line with growing free cash flow. And as we look beyond 2018 we continue to expect to grow returns as we grow our earnings within our disciplined investment framework.

While we still have some way to go to on returns, we are seeing good progress on the underpinning drivers of improvement. With the continuing momentum across the business, and growing free cash flow, we remain active in our share buyback programme. With gearing expected to trend down this year we will continue to ensure the right balance between distributions and disciplined investment. 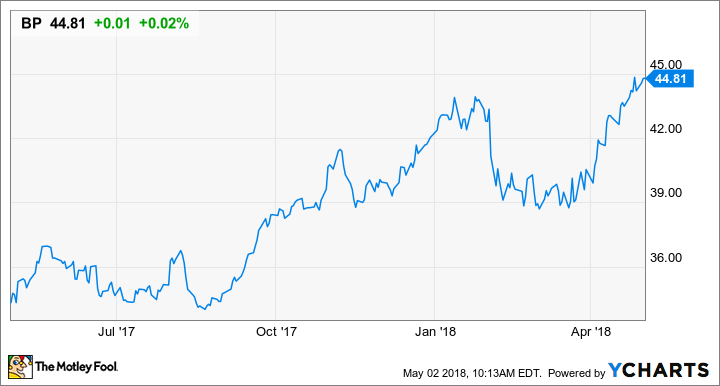 One of the most encouraging things about BP's investment plans is that the company will be able to bring on a lot of additional production over the next three or four years, while maintaining a relatively modest capital spending plan. That means management should have plenty of cash to give back to investors, in the form of either more share buybacks or dividend increases -- or both.

The question that should be a slight concern is whether the company is spending enough for its next wave of projects, which would likely go live five to seven years from now. The two projects that were recently given final approval should give a little clarity about that plan, but don't be surprised if we start to see management start to add a little extra to its exploration budget either this year or next. For now, though, it looks like BP is going to have a very nice run here in 2018, and possibly into 2019, with all the new major capital projects starting up.