Significantly higher production levels and operating cash flow led the company to deliver some of its best financial results in years.

BP (BP 3.18%) surprised a lot of people earlier this year when it announced it was going to start buying back shares with excess cash from operations. While most of its peers were looking to be on more solid financial footing, no one else had quite reached that milestone yet. This past quarter, the company continued to deliver results that enabled management to execute that plan.

Here's a look at BP's most recent results and what investors can take away from this string of recent good news.

Like so many others this past quarter, BP's bottom line was drastically impacted by some large one-charges. Unlike its peers, though, a significant portion of those charges was related to the Gulf of Mexico spill settlements. Management had anticipated expenses this past quarter to be similar to the $600 million it spent in the third quarter, but they ended up closer to $1.5 billion. CFO Brian Gilvary anticipates that the company will pay out $3 billion for the spill in 2018 and $2 billion in 2019. BP also took a $900 million charge for the changes in U.S. tax law.

The most interesting aspect of BP's operating profit results was its downstream operations. Sure, the company continued its trend of incredible production growth that also benefited from higher realized prices, but the company's refining and lubricants segment remained surprisingly resilient despite the higher feedstock costs. This stands in stark contrast with BP's peers this past quarter, which posted much lower results from their downstream operations. 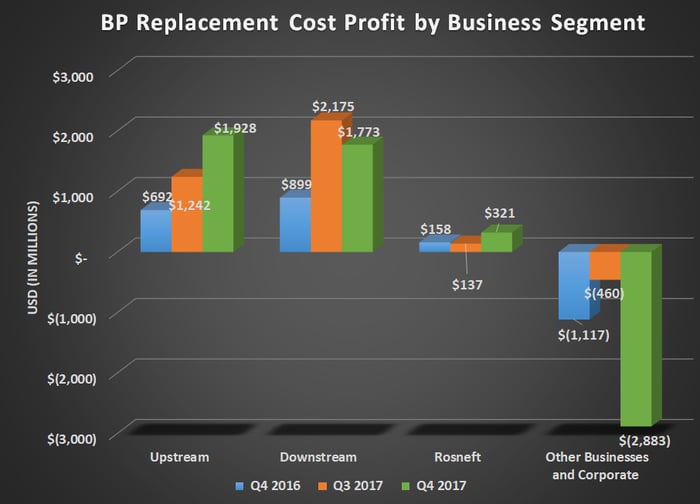 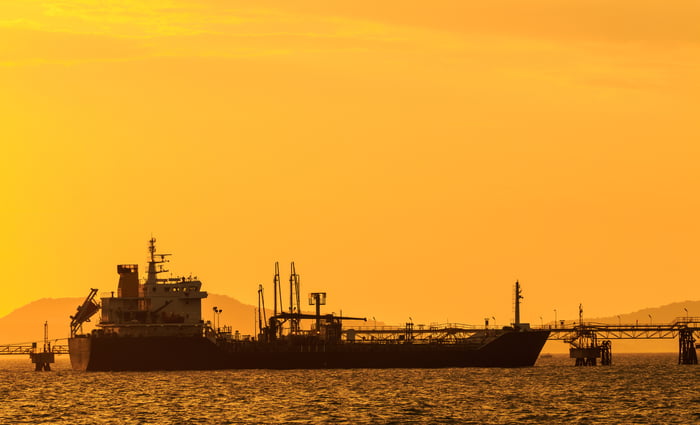 Here's CEO Bob Dudley's statement on the company's performance in 2017 and the progress BP has made on its five-year strategic plan:

2017 was one of the strongest years in BP's recent history. We delivered operationally and financially, with very strong earnings in the Downstream, Upstream production up 12%, and our finances rebalanced. And we did all this while maintaining safe and reliable operations. We enter the second year of our five-year plan with real momentum, increasingly confident that we can continue to deliver growth across our business, improving cash flows and returns for shareholders out to 2021 and beyond. At the same time, we are embracing the energy transition, seeking new opportunities in a changing, lower-carbon world. 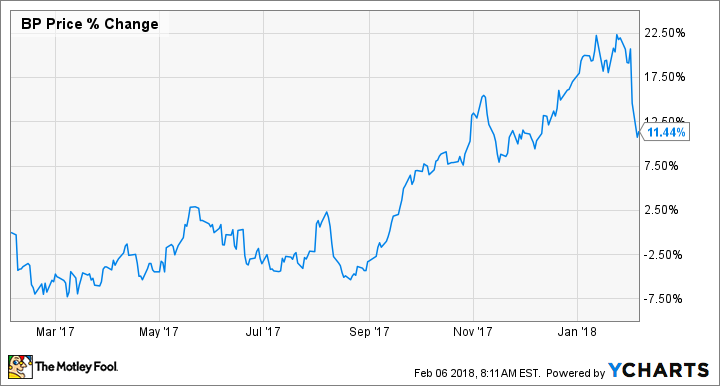 This past quarter was a surprisingly good one. While investors should have expected higher production and better prices for BP's upstream business, the resiliency of its downstream business was a pleasant surprise. It's a little obnoxious to see charges for the Gulf of Mexico still having such a significant impact on the bottom line when management has been saying those costs should dissipate, but the operating performance of the business has been more than enough to make up for it.

It's also interesting to see that BP is ramping up its spending on alternative energy again. On top of the Lightsource acquisition, management now expects to spend $500 million annually on its renewable and alternative energy platforms. It's going to take a long time before these businesses move the needle, but it has to start somewhere.

Overall, though, things are looking good at BP. Operations are going well, it's generating enough cash to cover its obligations and start buying back a modest amount of shares, and management has a pretty clear vision for the next several years. That is something that couldn't have been said a couple of years ago, and it makes the company look much more attractive.