Please ensure Javascript is enabled for purposes of website accessibility
Log In Help Join The Motley Fool
Free Article Join Over 1 Million Premium Members And Get More In-Depth Stock Guidance and Research
By Daniel Miller – May 2, 2018 at 1:30PM

Molson Coors delivered first-quarter results that missed on both the top and bottom lines, but management remains confident headwinds will lighten over the full year.

Shares of Molson Coors Brewing Company (TAP -1.60%), known for its Coors Light, Miller Lite, and Blue Moon beer brands, among many others, are down 12% as of 10:40 a.m. EDT Wednesday after the company posted weaker than anticipated first-quarter results.

The beer brewing giant reported revenue of $2.33 billion during the first quarter, which was short of Wall Street estimates calling for $2.44 billion. Adjusted earnings per share checked in at $0.48 per share, falling far short of analysts' estimates anticipating $0.80 per share. A number of factors contributed to the worse-than-expected quarter. Molson Coors' top line suffered due to lower financial and royalty volumes as well as a negative global mix. Another factor was the reversal of the indirect tax provision benefit in Europe, which negatively impacted sales and pre-tax income by roughly $50 million. Lastly, the beer brewer's U.S. sales to wholesalers (STWs) were down 6.7% as the company under-shipped product compared to the prior year. 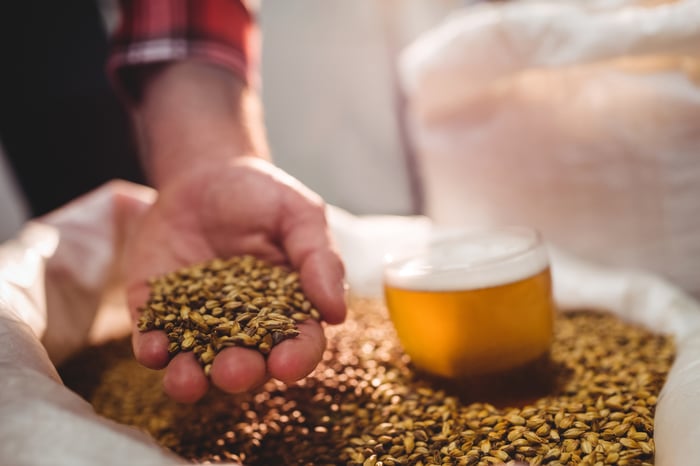 Management notes that of the aforementioned headwinds in the first quarter, the reversal of the indirect tax provision in Europe is already in the rearview mirror, and it anticipates a rebound in the beer markets.

Despite a slump in 2017, the company remains confident about its full-year. "Across Molson Coors, our teams are focused on our first priority, which is to drive margin expansion, bottom-line growth and strong free cash flow to enable deleverage," said Molson Coors president and CEO, Mark Hunter, in a press release. "Our regional business plans are clear and consistent with these priorities, and we remain committed to delivering our full-year 2018 plans."