Please ensure Javascript is enabled for purposes of website accessibility
Log In Help Join The Motley Fool
Free Article Join Over 1 Million Premium Members And Get More In-Depth Stock Guidance and Research
By Jeremy Bowman - Updated May 2, 2018 at 7:19AM

Sales are still falling in the sportswear maker's home region, but growth abroad offers some hope.

In sports, the home team almost always has the advantage. However, for Under Armour (UA 1.19%) (UAA 2.04%), the home market has not given it much of an edge lately. The sportswear company has struggled to grow sales in North America, instead relying on faraway foreign markets for growth, and that pattern continued in its first quarter.

The Baltimore-based company said revenue in the U.S. and Canada dipped 0.4% in the quarter, or 1% in constant currency, to $867.5 million, marking the third straight quarter that sales in its home region have fallen. On the bottom line, the North American results were even uglier as a $3.7 million operating profit a year ago reversed to a $43.5 million loss, which was the main reason for its total $28.7 operating million loss in the period.

Meanwhile, the international segment continued to shine. It seems like the farther away the company gets from its Maryland hadquarters, the better it does. International sales were up 27% in the quarter, or 19% in constant currency, to $289 million. The Asia-Pacific region was particularly strong: Sales jumped 34.6% to $115.6 million, and it delivered an operating profit of $21.2 million, up 8.6% from a year ago. It was the only one of its four geographic regions to show a profit. 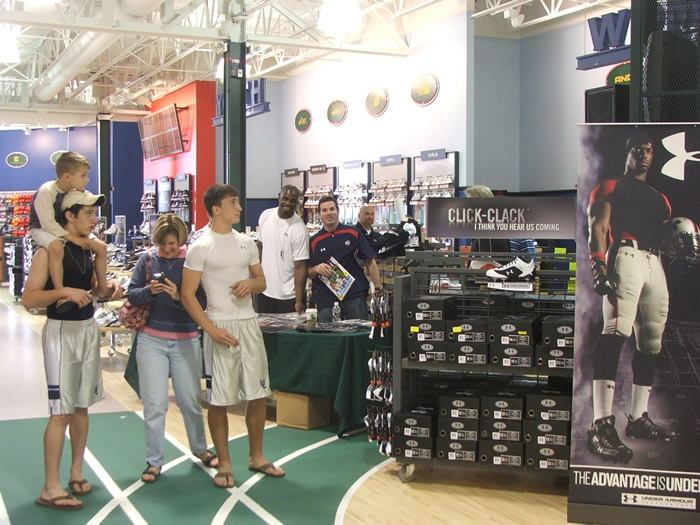 A number of small issues have contributed to Under Armour's weakening performance in its home market. They include a weak launch of its trademark Curry 3 shoes; CEO Kevin Plank's praise of President Trump early in his administration, sparking blowback from some Under Armor customers and Steph Curry himself; and the broader upheaval of the retail industry, which has caused some Under Armour resellers to hit a wall in their sales growth (like Dick's Sporting Goods) or even go out of business (like The Sports Authority).

In addition, there's abundant evidence that Under Armour has simply fallen out of fashion. NBA star Kevin Durant said young players don't want to wear Under Armour in part because they're used to playing in Nikes (NKE -1.00%), and the brand has been trending negatively in Piper Jaffray's semiannual survey of American teens. In the April report, Under Armour was named by upper-income males as the No. 1 brand they are no longer wearing for the third time in a row.

However, the biggest factor behind Under Armour's challenges at home may be a resurgent Adidas (ADDYY -0.36%)and the retro styles the competitor has brought back into fashion, such as the Superstar and the Stan Smith. In its most recent quarter, Adidas saw North American sales jump 31% on a currency-neutral basis, and it has replaced Under Armour as the No. 2 sportswear brand in North America.

Adidas' growth has also weighed on Nike, the global leader, which saw North American revenue decline 6% in its most recent quarter. However, even Nike sees an opportunity to invade Under Armour's home turf.

Late last year, Nike launched an exclusive sneaker just for Baltimore, which it called the Special Field Air Force 1 Mid for Baltimore. The shoe was inspired by the city's role in keeping the now-legendary Air Force 1 shoe alive. In a promo for the shoe, Nike stated: "Without Baltimore, the Nike Air Force 1 might have faded out of existence. In 1984, two years after its launch, Nike wasn't planning to continue production of the shoe, but thanks to Baltimore's enthusiastic wearers, the AF-1 continued to be made."

At home in China

While Under Armour struggles at home, it's been getting a warm reception in China. Sales jumped 61.4% in the Asia-Pacific region last year, and management has referred to the world's most populous country as a "hyper-growth" market.

Basketball reigns supreme as the most popular team sport in China, and Under Armour seems to be benefiting in particular from Steph Curry's celebrity. Curry plays in a region with a large Chinese population, he led the Golden State Warriors to two NBA titles in the last three years, and he has an electrifying style, all of which have combined to make the Baby Faced Assassin a fan favorite in China. Under Armour has been milking that fame as they've taken Curry on tour in each of the last four years, building China's love for Curry and the Under Armour brand.

China has been a much-needed source of growth for Under Armour, but the company won't thrive until it wins back its home market. In the most recent quarter, North American sales were still seven times that of the Asia-Pacific region and three times total international sales, which means North American results have by far the biggest effect on the overall numbers. Those challenges aren't expected to ease any time soon, as the company is forecasting a mid-single-digit revenue decline in North America for the year.

With its retail partners under pressure and the brand seemingly out of fashion, it will take time for Under Armour to get back into the win column at home.