Please ensure Javascript is enabled for purposes of website accessibility
Log In Help Join The Motley Fool
Free Article Join Over 1 Million Premium Members And Get More In-Depth Stock Guidance and Research
By Keith Speights - May 3, 2018 at 6:31AM

The new ExcelsiusGPS robotics and navigation system generates big sales growth for the medical-device company in the first quarter.

After a delay, Globus Medical (GMED 2.81%) launched its ExcelsiusGPS robotic surgical system late last year. This new system made an immediate impact in the musculoskeletal-solutions company's fourth-quarter results. And Globus Medical stock has been on a nice run ever since.

The company announced its 2018 first-quarter results after the market closed on Wednesday. Did Globus Medical receive another robot-assisted boost? Here are the highlights from the company's update. 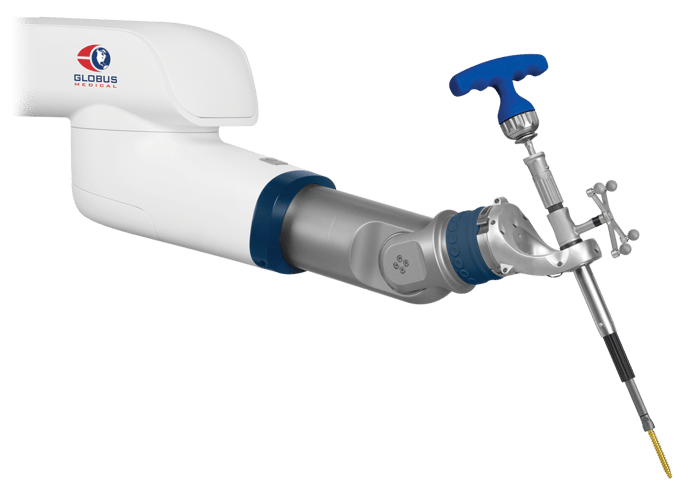 What happened with Globus Medical this quarter?

Adjusted EPS also jumped, but not quite as much as Globus' GAAP earnings. One key reason why was that the company issued additional shares over the last 12 months.

Globus Medical ended the first quarter with a rock-solid balance sheet. The company has no debt, and it reported cash, cash equivalents, and marketable securities totaling $473.6 million as of March 31, 2018.

We are pleased with our first quarter performance-not only the continued excitement among surgeons and hospitals about ExcelsiusGPS, but also the above market growth we achieved in the U.S. with our core spine business and the solid operational improvements we saw in several important International markets. I'm very proud of our team's ability to capitalize on our growth opportunities while maintaining fiscal discipline, as our bottom line grew as fast as our top line, even though we continue to invest heavily in imaging, navigation, and robotics as well as trauma.

Thanks to its strong first quarter, Globus Medical raised its full-year 2018 guidance. The company now expects full-year 2018 sales of $695 million, up from its previous forecast of $690 million. Globus projects non-GAAP fully diluted EPS of $1.52, a boost from the $1.50 adjusted EPS guidance provided in February.

ExcelsiusGPS could be the gift that keeps on giving for Globus. The new system has played a big role in the company's great performance for two quarters in a row now, and it's still early.

With its large cash stockpile, it wouldn't be surprising for Globus Medical to once again be on the hunt for an acquisition. The company made a couple of significant deals over the past two years, including the buyout of AlphaTec's international business and robotics developer KB Medical. Globus is in even better position to make acquisitions now.