Please ensure Javascript is enabled for purposes of website accessibility
Log In Help Join The Motley Fool
Free Article Join Over 1 Million Premium Members And Get More In-Depth Stock Guidance and Research
By Rich Duprey - May 3, 2018 at 6:46AM

The logistics and trucking giant will share its vast warehouse and distribution network with retailers.

One of the benefits Walmart (WMT 0.08%) has over the competition is its vast geographical footprint. With some 5,000 stores spread across the U.S., which serve double duty as distribution centers for the products it sells online, it is within a 15 minute drive of 90% of the population. It is but one reason why its buy online, pick-up-in-store service has been so popular.

It is very difficult and expensive for most other retailers to match the expanse of Walmart's reach; even some of its biggest rivals find it difficult to compete, but XPO Logistics (XPO 7.31%) is looking to level the playing field.

The logistics and trucking leader just launched XPO Direct, a shared-space distribution model that lets online and offline retailers use its technology, trucks, and workforce to narrow the distance between themselves and their customers.

Rather than having to build out their own distribution centers, which could cause retailers to raise prices, thereby negating the benefits they would realize from speedier delivery times, XPO Direct allows them to instead rent XPO Logistics' own vast scale of storage space and delivery vehicles to fulfill last-mile consumer demand. 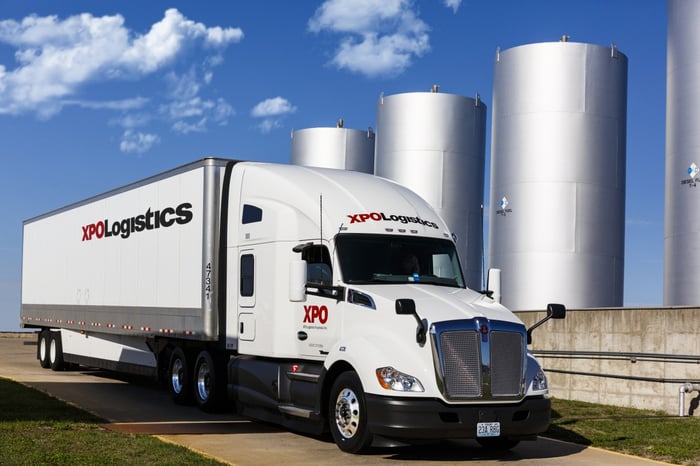 XPO says multiple customers will have simultaneous access to its network of warehouses and last-mile hubs to use as distribution points and flexible stockholding sites. They will then be able to use XPO's fleet of trucks and trailers that it owns, or otherwise brokers and contracts, to speed delivery of their products.

Because its own footprint in North America is so broad, it can position goods within two days' delivery of 95% of the U.S. population, not to mention put it close to retail stores themselves, which would allow retailers to replenish their inventory quickly and easily.

Retailers have come to understand it's no longer an either/or proposition whether physical stores or online shops are needed; an omnichannel response to consumer demand has become essential for survival. Offering consumers a blended opportunity to buy goods and services when they want and how they want has become key, and though an omnichannel network won't guarantee success, a business without one will likely struggle.

Walmart and Amazon.com (AMZN 3.58%) are already logistics specialists in their own right, though even the latter, despite its own substantial resources, isn't above using existing capabilities to supplement its own efforts. Amazon has been rumored to be interested in buying XPO Logistics as it centralizes its own logistics and transportation services.

For smaller brick-and-mortar retailers as well as those trying to compete online, XPO Direct could give them the opportunity and expertise to stay relevant with their customers. It would also open up the possibility for them to offer programs they might not otherwise be capable of, such as loyalty programs to earn free shipping, much as Amazon does with its Prime membership. When a business doesn't have to worry about how it will accommodate the inventory needs of its business and getting it to its customers, it can get creative.

XPO Logistics, of course, will reap benefits as well. It generated $15.4 billion in revenue last year, a 5% increase from the year before, while operating income soared 28%. Getting more closely enmeshed in the rough-and-tumble of the retail landscape by helping the little guy take on the industry titans could make its business even more valuable.