Please ensure Javascript is enabled for purposes of website accessibility
Log In Help Join The Motley Fool
Free Article Join Over 1 Million Premium Members And Get More In-Depth Stock Guidance and Research
By Ashraf Eassa - May 4, 2018 at 10:26AM

Intel hopes not to repeat the mistakes of the past.

Chip giant Intel (INTC -0.77%) has struggled mightily to bring its 10nm chip manufacturing technology into mass production at yield rates that it deems acceptable. That struggle has led to a multiyear delay in the mass production of its 10nm technology, which has led to numerous product delays and cancellations.

In fact, Intel CEO Brian Krzanich indicated on the company's earnings conference call on April 26 that he's not sure yet whether this technology will go into mass production in the first or second half of 2019. 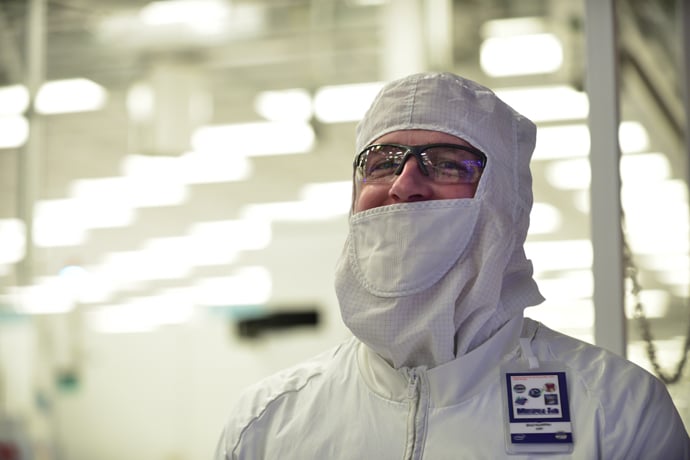 Also during that conference call, one analyst asked Krzanich if he expected the problems that Intel experienced during the 10nm generation to carry over to the follow-on generation, known as 7nm.

Krzanich was optimistic that those issues wouldn't; here's why.

Logic density affects how small and, ideally, cheap a chip is to manufacture. All else being equal, better density means a smaller and ultimately cheaper-to-build chip.

Krzanich conceded that Intel may have "bitten off more than it could chew" in trying to go for such a large leap in logic density. For the upcoming 7nm technology, the executive says the company is targeting a more typical 2.4-times improvement in logic density compared to its 10nm technology.

Use of EUV lithography

Krzanich also explained that the issues the company is grappling with regarding 10nm yields is that the technology uses traditional immersion lithography rather than extreme ultraviolet (EUV) lithography.

The technical details here aren't important, but what you need to know is that, assuming the EUV lithography equipment is available, it's generally much easier to pattern smaller chip features using EUV than it is with immersion lithography.

Krzanich says that because the company's 7nm technology will use EUV lithography rather than immersion lithography in many of the manufacturing steps, some of the critical issues that Intel ran into in the development of 10nm won't pop up again in the 7nm generation.

Ultimately, I think Intel became so obsessed with "beating" the competition in the race to produce the densest chips during the 10nm generation that it designed a manufacturing technology that was more about winning an arbitrary contest than about delivering a technology on time to support all of the products it needs to build to support its businesses.

With the 7nm technology, at least based on what Krzanich has said, it looks like the company is going to back down from taking unnecessary risks just to win that contest and will instead focus on building a technology that'll actually arrive on time.

If Intel succeeds in getting its manufacturing technology development back on track with the introduction of 7nm -- and if it doesn't forget the painful lessons it learned during the 10nm generation -- then the company's future could be a lot brighter with fewer product delays and less manufacturing-related uncertainties.