Gold streaming company Franco-Nevada Corporation (TSX:FNV) offers investors a unique way to gain exposure to precious metals, but when you compare it to peers Royal Gold, Inc. (NASDAQ:RGLD) and Wheaton Precious Metals Corp. (NYSE: WPM) it looks relatively expensive. That said, if you are looking to gold for diversification you might still find that Franco-Nevada Corporation stock is a buy.

Franco-Nevada's core business is gold streaming, though it also uses the same basic model with other commodities (more on this below). This means that it provides gold miners cash up front in exchange for the right to buy gold at reduced rates in the future. This is good for miners: It provides an additional source of money for capital projects and debt repayment, which is especially important as capital markets and banks can be expensive sources of capital. 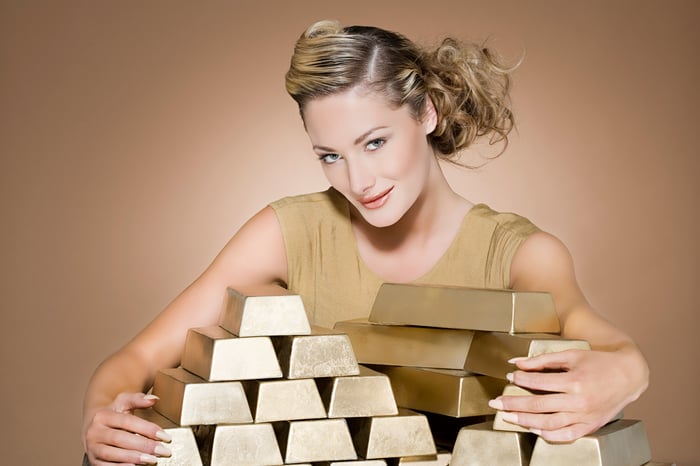 For Franco-Nevada and its peers, meanwhile, streaming agreements provide locked in low prices for gold, silver, and other commodities. That provides streamers with wide margins in both good and bad markets. But these agreements are financial, so Franco-Nevada never gets its hands dirty mining -- it's more like a specialty finance company that owns a portfolio of streaming deals. This allows it to create a more diversified business than miners, which often have only a handful of mines in operation and development.

Over the past decade this model has worked quite well for Franco-Nevada and its investors. The stock is up around 600% over that span, compared to gold's advance of around 80%. Miner Barrick Gold Corp, meanwhile, was down nearly 25% over the period. 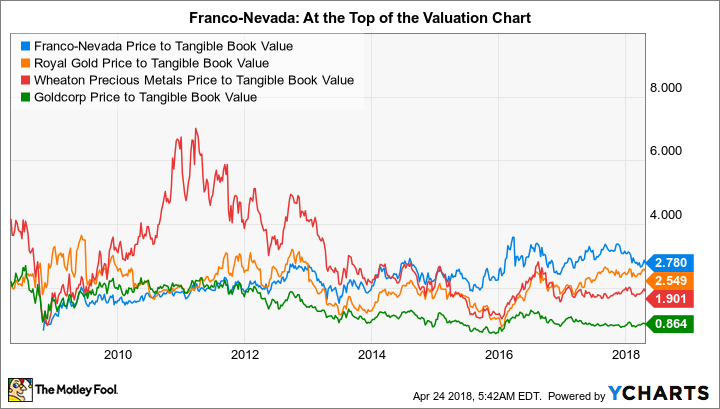 Franco-Nevada, meanwhile, has increased its dividend annually for a decade, an impressive achievement given the often volatile nature of gold prices (and the commodity downturn between 2011 and 2016). Dividend investors, however, will probably find Royal Gold's streak of 17 years even more impressive. As for income, Franco-Nevada's 1.3% yield beats Royal Gold's 1.1% yield, but lags behind the 1.6% offered by Wheaton (though Wheaton's dividend is variable and based on performance).

Not all the news is bad

Franco-Nevada doesn't really stand out among its peers, but there are still some reasons to like this streaming company. For example, it has the most diversified portfolio of any of its peers, with investments in 50 operating mines, 36 mines in an advanced stage of development, and 208 in earlier development and exploration stages. Royal Gold's portfolio has 193 mines, 39 of which are producing, and Wheaton has investments in just 26 mines, 17 of which are producing. 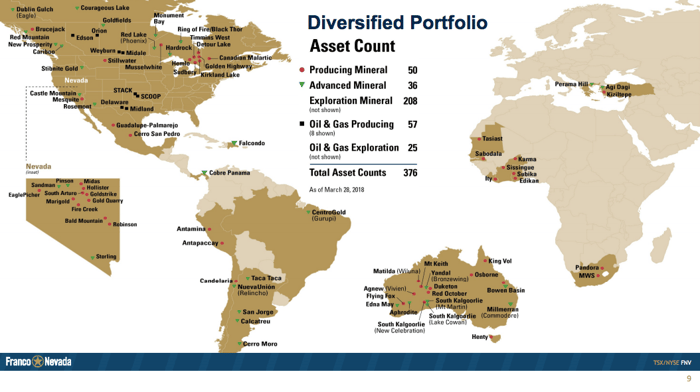 Franco-Nevada's portfolio is the most diversified of its direct peers. Image source: Franco-Nevada Corporation

So clearly Franco-Nevada has a more diversified portfolio of mine investments. But its portfolio also includes 57 operating oil and gas investments and 25 energy exploration projects. Energy makes up around 7% of the company's revenues, adding another level of diversification to its portfolio that neither Royal Gold nor Wheaton provides. If you are looking for a precious metals investment for the diversification it offers, Franco-Nevada isn't a pure play, but it is by far the most diversified.

As for dividends, Wheaton's relatively lofty yield can't be relied upon to stick around since the dividend is inherently variable. And Franco-Nevada's short annual dividend increase streak (at least compared to Royal Gold's) is forgivable since Franco-Nevada has only been public in its current form for a decade -- meaning it's rewarded investors with a dividend increase in each year of its existence so far. Not a bad record at all.

If you are looking for a cheap streaming option, then Wheaton is your best bet. It also has the highest yield here, though the dividend is variable by design, so you can't count on that lasting. Royal Gold cuts a middle ground value-wise, and has a longer streak of annual dividend hikes, but offers the lowest yield of this trio.

Franco-Nevada is the most expensive option here, has a higher yield than Royal Gold, a still impressive annual streak of dividend hikes, and a more diversified portfolio, including the addition of energy investments. It's hard to suggest that Franco-Nevada is trading at a bargain price today, but if what you want is a mix of diversification and income, you might still find it has a place in your portfolio.