Please ensure Javascript is enabled for purposes of website accessibility
Log In Help Join The Motley Fool
Free Article Join Over 1 Million Premium Members And Get More In-Depth Stock Guidance and Research
By Eric Volkman – May 4, 2018 at 7:11AM

The IT storage specialist has benefited from the ever-increasing demand for flash memory; its legacy HDD business isn't doing badly either.

Veteran IT storage company Western Digital (WDC 1.15%) delivered an estimates-beating quarter when it reported its fiscal Q3 results last week. Several key factors drove the company's headline numbers higher; let's take a look at them, and where Western Digital might be heading from here.

The company posted revenue of roughly $5.0 billion for the period, which edged past the average analyst estimate of $4.9 billion and was an encouraging 8% higher on a year-over-year basis. 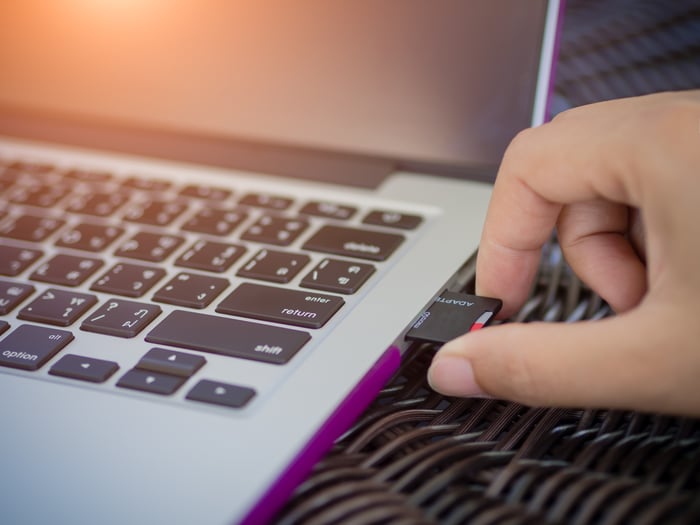 He added that "a compelling portfolio of HDD and NAND flash products coupled with favorable macroeconomic conditions positions the Western Digital platform to drive further value for our customers and other stakeholders."

Concurrent with the Q3 results Western Digital also proffered guidance for the present (fourth) quarter. The company believes it will post revenue of $5.0 billion to $5.1 billion, while adjusted EPS should land between $3.40 and $3.50.

In spite of those Q3 revenue and earnings beats, Western Digital's stock really took it on the nose the day after the results were announced.

Perhaps investors are worried about the broader NAND memory space since prices have slipped recently, and some fear sharper declines are on the way (supply shortages pushed up prices last year, and so far they have yet to fall too steeply).

Others point out that rivals, specifically Western Digital's not-quite-but-almost comparable peer Micron Technology (MU 0.18%), are cheaper on the by traditional valuation metrics.

Regardless we live in a flash memory world; those little cards are everywhere these days, capturing our video clips and holding other useful data. It's a segment that'll continue to grow robustly, thank you very much -- data compiled by Statista indicates that, worldwide, the segment collected over $36 billion in revenue in 2016. That figure is projected to hit more than $64 billion by 2021.

Meanwhile, the company's theoretically zooming-toward-obsolescence hard drive segment is surprisingly resilient -- Milligan's quote about the success of enterprise hard drives speaks to this. But what I find most encouraging is that Western Digital, which absorbed grand flash master SanDisk in 2016, at a stroke positioned itself as a major player in the storage technology of today and the immediate future.

That's why I'm not overly concerned about those negatives, and why I'm holding on to my Western Digital shares. There's plenty more growth to come for this company, in my view, and it's an exciting time to own the stock.