Please ensure Javascript is enabled for purposes of website accessibility
Log In Help Join The Motley Fool
Free Article Join Over 1 Million Premium Members And Get More In-Depth Stock Guidance and Research
By Matthew DiLallo - May 4, 2018 at 11:07AM

The California-focused oil producer cashed in on higher crude prices.

Shares of California Resources Corp (CRC) are skyrocketing today, up 23% as of 10:58 a.m. EDT, after the company reported surprisingly strong first-quarter results.

California Resources reported $8 million, or $0.18 per share, in adjusted net income during the first quarter, which came as quite a surprise considering that the analysts' consensus was that the company would report a loss of $0.75 per share. One of the factors fueling that unexpected profit was that production averaged 123,000 barrels of oil equivalent per day, which exceeded the midpoint of its guidance range. In addition to that, the company also benefited from higher oil prices and its ability to keep a lid on costs. 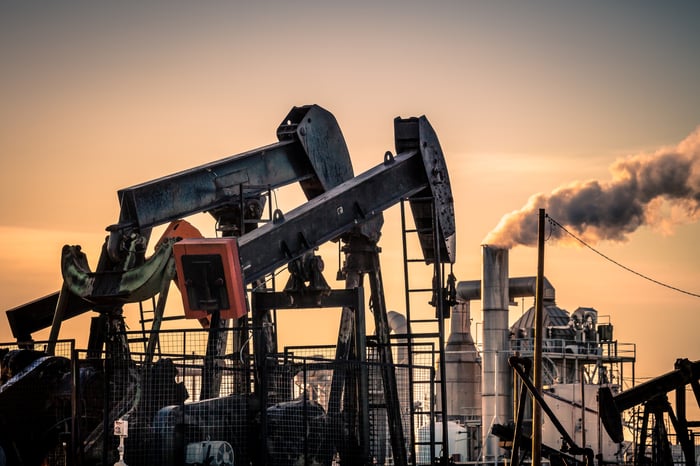 Thanks to higher production and oil prices, California Resources generated $200 million in cash from operating activities in the first quarter, which was enough to fund its $139 million in capital expenses with $61 million to spare. That excess cash enabled the company to repurchase $95 million of its outstanding debt, which it acquired for only $79 million. Meanwhile, the company also increased its full-year capital expenditure budget by $50 million up to a range of $550 million to $600 million, which should provide a more meaningful boost to production in 2019.

Higher oil prices are providing California Resources with a much-needed boost. However, that improved pricing aside, the company remains deeply indebted despite the incremental debt reduction during the quarter. After all, it recently agreed to pay $460 million in cash, plus 2.85 million shares of stock, to acquire assets from longtime partner Chevron. That elevated debt, along with the potential for Chevron to monetize those shares, could weigh on California Resources stock if crude prices pull back.