Few retailers have done better than Home Depot (NYSE:HD) over the last 10 years. Shares of the home improvement retailer have soared by more than 500% over that period, as the company rode the housing recovery wave and made smart strategic moves that helped it buck the headwinds buffeting the broader retail sector.

While many other big-box chains have been forced to close stores due to the "retail apocalypse," Home Depot avoided that by simply refusing to open new locations: The company's store count has essentially been flat over the past decade. Instead, it invested in improving its locations, its technology, and its e-commerce platform, and it has been returning capital to shareholders -- its dividend has more than quadrupled in that period. As a result, the stock has crushed rival Lowe's (NYSE:LOW), more than doubling its returns over the past 10 years, and beating it during virtually any time frame of that decade you could pick.

Investors may be wondering if the good times will continue over the next decade. While much of that answer will depend on how the housing market fares -- Home Depot's performance is highly correlated with it -- there are a few predictions we can make based on the company's current trajectory. 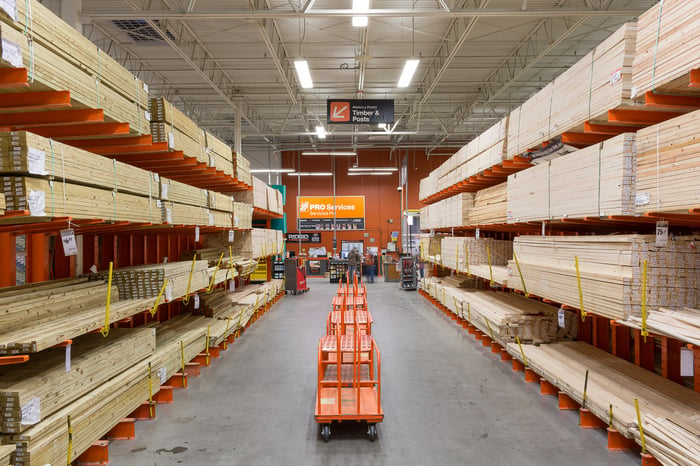 Home improvement retailers like Home Depot and Lowe's have thrived in part because their niche is relatively protected from e-commerce and Amazon (NASDAQ:AMZN). Last-mile delivery (i.e. bringing products to customers' homes) of things like 2x4's or windows just isn't very practical or cost-effective for e-tailers. However, that doesn't mean Home Depot can just ignore the online channel -- and it hasn't. It's made significant strides through its One Home Depot plan to integrate its e-commerce and brick-and-mortar operations.

E-commerce will only become more important over the next decade, and it's clear Home Depot management understands this. In April, the company said it would hire 1,000 new tech professionals to support key strategic initiatives through advanced software engineering, user interface design, and product management.   "Our team is building some of the most advanced software anywhere to help customers shop whenever, wherever and however they want," said Chief Information Officer Matt Carey.

Fast Company also named Home Depot one of its 50 Most Innovative Companies last year, citing its investments in delivery and in-store pickup infrastructure, as well as its decision to train employees to use specially designed handheld devices to easily get information about inventory and help customers find products.

It's unclear how technology will affect retail in the coming years, but augmented reality, virtual reality and other such innovations are likely to become part of the shopping experience, as will enhancements in e-commerce like drone deliveries. Expect Home Depot to remain a tech leader among retailers.

A Recode article in December made waves when it asserted that Home Depot was considering acquiring XPO Logistics (NYSE:XPO), the U.S. leader in last-mile delivery of heavy goods like furniture and appliances. Home Depot already has a close relationship with XPO, naming it its Mid-Size Truckload Carrier of the year in 2015, and was reportedly interested in acquiring it in part to keep it out of the hands of Amazon, which has been ramping up efforts to sell products like furniture, and is also an XPO customer.

It's been more than four months since Recode first reported that rumor, and based on the lack of further news, it appears Home Depot's interest didn't move past internal discussions. XPO is now worth $12 billion, so taking it over wouldn't come cheap even for a company that made $8.6 billion in net income last year.

Still, that it was even being considered reflects Home Depot's interest in making bigger moves in e-commerce, or expanding its business via acquisitions. There aren't many publicly traded companies like XPO, but considering Home Depot's sizable cash flow in the context of its strategy of not opening new stores, it could use areas to invest in outside of its own store base and technology. Don't be surprised if Home Depot makes a sizable acquisition in the next 10 years.

As much as any other company, Home Depot has set straightforward goals for itself, and consistently knocked them down. In December, the company announced its targets for 2020, which included revenue of $114.7 billion to $119.8 billion, which would require compound annual growth of 4.5% to 6%, and which would come from an increase in comparable sales. It also is forecasting and operating margin in the 14.4% to 15% range, compared to the 14.5% it achieved last year. It also targeted return on invested capital in the 36.4% to 39.6% range at that time, but raised that to more than 40% after the corporate tax cuts were enacted.

If Home Depot can continue to grow at that rate over the next 10 years, increasing revenue by 5% a year and improving operating margin to, say, 16%, while reducing its share count by 50 million a year as it did last year, it will have $165 billion in revenue, and operating profit of $26.3 billion. Assuming interest expenses of $1 billion and a tax rate of 26% (as it forecasts for the current year), the company would have $18.7 billion in annual net profits. If it repurchases 50 million shares each year, it will reduce its share count from 1.184 billion to 684 million, leading to earnings per share in 2027 of $27.34, nearly quadruple the $7.33 EPS of 2017. In other words, it would grow earnings per share by about 14% annually. Investors should expect similar growth in the company's dividend, which would take it from $1.03 each quarter to about $3.87.

CEO Craig Menear, who took over in 2014, is 60 now, so there's a good chance someone else will be running the company in 10 years, but he has done an excellent job thus far, so I expect the board will try to keep him in the role for as long as he's willing to stay.

A housing market crash would certainly set the company back, but this is a well-managed chain with a strong brand. I expect Home Depot to still be the leader in home improvement retail 10 years from now.