Please ensure Javascript is enabled for purposes of website accessibility
Log In Help Join The Motley Fool
Free Article Join Over 1 Million Premium Members And Get More In-Depth Stock Guidance and Research
By Lee Samaha – May 7, 2018 at 6:17AM

Stock in construction and mining equipment company Caterpillar, Inc. (CAT -1.08%) is up around 42% in the last year but down more than 10% in the last three months. Moreover, the stock sold off aggressively after the recent first-quarter earnings report, but here's why I think the market is making a mistake. 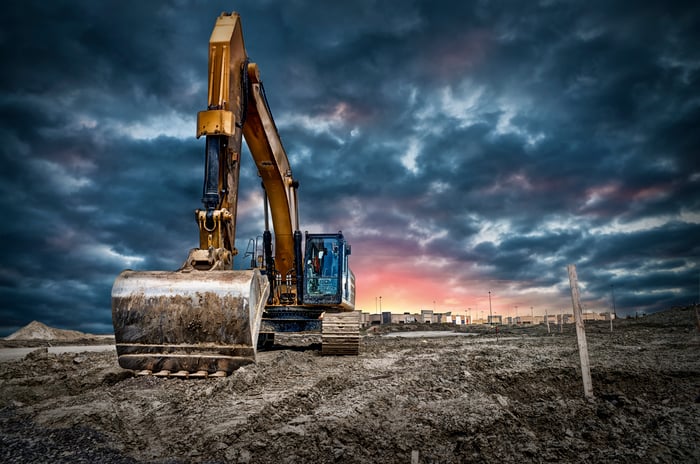 What happened in Caterpllar's first-quarter

There's two sides to the story. The first is that Caterpillar beat analyst estimates in the quarter and significantly raised its full-year 2018 guidance on the back of strongly improving end markets. Caterpillar's first-quarter revenue and earnings increased with the kind of improvement often seen by cyclical companies in the upswing of their cycle. Sales and revenue increased by 31% and adjusted profit per share more than doubled to $2.82 from $1.28 in the same quarter a year ago.

Furthermore, as you can see below full-year guidance was increased significantly.

What worried the market

While the results were impressive enough and the guidance increase is impressive, the other side of the story is what management said on margin guidance. In a nutshell, Caterpillar's raw materials costs (steel is a major component) are set to rise more than the company can increase pricing in the coming quarters.

Speaking on the earnings call CFO Brad Halverson said that " We do not expect to repeat first quarter operating margin at the consolidated level." Director of Investor Relations Amy Campbell went on to answer an analyst's question by saying " Yes, you're correct that we said that for the balance of the year price versus cost would be negative."

Of course, such commentary will lead to some Caterpillar investors/analysts scrambling to pencil in a trend of margin erosion caused by raw material price rises. And let's face it, no one likes buying a stock with deteriorating margin. However, I think it pays well not to panic in such situations.

Three reasons why the market is overreacting

The key points are as follows and will be fleshed out below:

As you can see in the table below segment profit in the first-quarter was exceptionally strong and came in above management's general target range in construction industries and resource industries. Moreover, Halverson noted that price versus cost came in "better than we expected", and even though increases in costs will be more than increases in pricing for the rest of the full-year, Halverson still expects pricing increases to more than offset costs for the full-year.

In addition, Halverson expects operating margins to be within or above the target ranges in the table above. Whichever way you look at it, Caterpillar is still heading for a good performance on margin for the full-year.

Campbell outlined that steel prices for the industry were up around 40% in 2017 and up 15% on a year-to-date basis, and she acknowledged that "we now expect material cost increases to be higher for the full year than we thought they would be in the fourth quarter outlook" largely due to steel price increases.

While this is obviously disappointing; some perspective is needed here. Steel is, in itself, a highly cyclical product and it's highly unlikely that prices increases will carry on at this rate in the future. In fact, a highly regarded industry analyst IHS Markit LINK forecasts that steel prices in the U.S. will "peak in the second quarter at levels not seen since the spike in 2011. As idle capacity ramps up and availability improves, prices ease in the third quarter, but not much. By early 2019 US prices are stabilizing but at very expensive levels."

In other words, Caterpillar should see some steel cost increase growth slow in early 2019.

Many of the market forces that drive demand for steel and other raw material are the same that drive Caterpillar's end demand -- construction, mining, oil & gas and even rail transportation is partly driven by the need to transport bulky materials. Halverson pointed this out on the earnings call and an analysis of Caterpillar's end markets and in particular, its exposure to an improving outlook for capital spending from mining companies confirms this.

In reality, Caterpillar just significantly increased its earnings outlook, so it's hard to argue that rising raw material prices are bad news overall for the company.

The fears over management's margin commentary are overstated and investors should look positively at the earnings report and overall tone. The bearish case for Caterpillar is certainly not best made by worrying about rising demand for raw materials -- actually, the real worry has always been about falling demand from a construction bust in China. All told, unless you think the global economy will slow in the coming years then the fears over Caterpillar's margin in 2017 are better off ignored.