Given the kind of year Caterpillar Inc. (NYSE:CAT) just had -- the stock rose nearly 70% in 2017 as it doubled its full-year earnings expectations -- it will be hard for the company to better it. However, that doesn't mean Caterpillar and its stock can't have another great year. A combination of positive momentum in its end markets and the benefits of substantive cost-cutting have positioned it strongly for 2018, so let's take a closer look at its prospects. 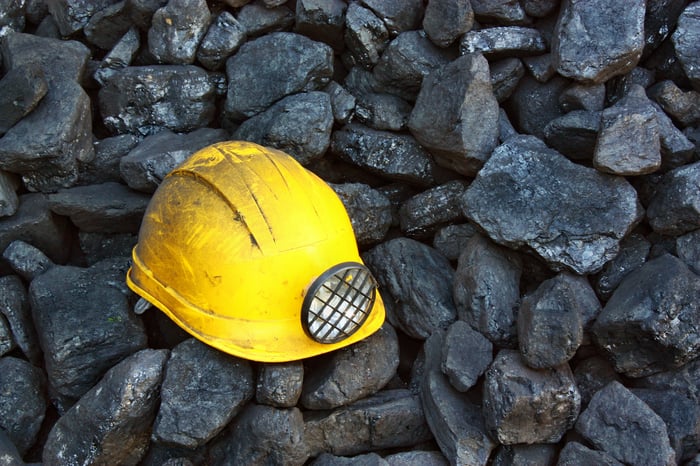 Mining is the key to Caterpillar's 2018. Image source: Getty Images.

Caterpillar is the very definition of a cyclical stock. It's end-market demand (construction, mining, oil & gas, transportation) tends to have a high degree of variability. Moreover, Caterpillar has a high amount of operational leverage, meaning increases in revenue can lead to much larger percentage increases in income.

You can see this by comparing the charts for long-term revenue, margin and income.

In addition, note that Caterpillar tends to trade at a high earnings multiple (in this case measured by EV/EBITDA) at the bottom of its cycle and a low multiple at the top of the cycle -- making investing difficult because usually, it makes sense to buy stocks at low earnings multiples rather than higher ones.

That said, Caterpillar's current valuation is looking historically high and it will clearly take ongoing improvement in its end markets for the stock to march higher. The good news is, it's likely to get it.

Having noted that Caterpillar has a high amount of operating leverage, it makes sense to focus on where its incremental revenue growth is likely to come from. To gauge that, let's look at how Caterpillar crushed it in 2017, and which regions and segments contributed to the increase in revenue in the first nine months of the year.

"Caterpillar continues to see strength in a number of industries and regions, including construction in China, onshore oil and gas in North America, and increased capital investments by mining customers," the company asserted in its 3Q earnings release.

The good news is Caterpillar's major end markets are firing on all cylinders right now. For example, the price of oil is now above $60 again after having started 2016 below $30, which is inducing capital investment in the oil and gas sectors. Also, transportation companies and mining companies are soaring on the back of anticipated higher economic growth in North America and higher commodity prices. Meanwhile, President Trump's Tax Cuts and Jobs Act of 2017 looks likely to boost construction demand.

Zeroing in on the key swing factor for revenue in 2018, I think it's going to be mining and Caterpillar's resource industries segment. As you can see above, resource industries in Asia-Pacific and North America only contributed a combined 13.5% of the increase in sales in the first nine-months of 2017 -- there's a lot of room for more in 2018.

According to Caterpillar, the mining cycle is set to turn, and rising prices for coal, iron ore and copper suggest good prospects for increases in capital machinery spending.

Moreover, Wall Street analysts, like JPMorgan believe mining commodities are near the start of a decade-long period of rising demand. Shareholders will be hoping that JPMorgan is right because Caterpillar needs its resource industries segment to grow strongly in order to support its valuation. It also needs stable demand growth from China and the pivot of improving growth in the U.S. -- both would help demand for industrial metals. If these conditions prevail, the company and the stock could have another great year.