It's not hard to see the overlying reason why Caterpillar Inc. (NYSE:CAT) stock is up nearly 50% in 2017 at the time of this writing. The simple explanation is earnings expectations have more than doubled since the start of its financial year as management raised full-year 2017 adjusted profit per share guidance from $2.90 to $6.25. Here's a look at just how and why this happened. Why Caterpillar surged in 2017

Of course, any significant change at any company will have a myriad of factors behind it, but here are the three prevailing factors behind Caterpillar's performance so far:

The end result has been that full-year profit per share expectations (including restructuring) have doubled from $2.30 at the start of the financial year to $4.60 even as planned restructuring costs for 2017 have increased from $500 million to $1.3 billion. Whichever way you look at it it's been an outstanding year for Caterpillar.

All told, stronger than expected GDP growth in China has significantly benefited Caterpillar in 2017, and higher oil prices have also played a major role in driving sales increases at the company. Meanwhile, U.S. non-residential construction growth has improved and the housing market (residential construction) remains in growth mode -- all good news for construction equipment sales. 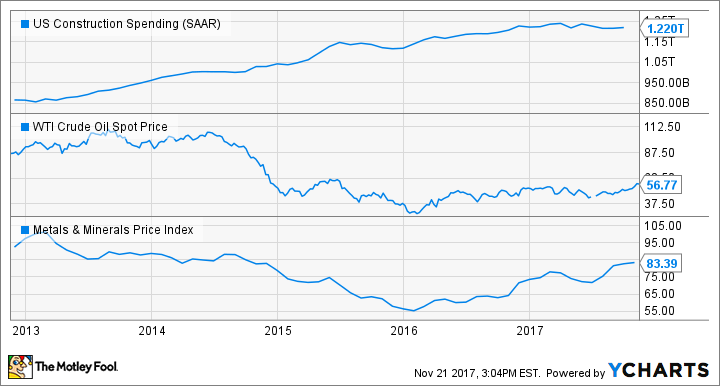 US Construction Spending data by YCharts.

So sales have improved, and as is often the case with highly cyclical companies, an increase in the top-line (revenue) drops through into the bottom line (earnings). Caterpillar is a good example of a cyclical company with good operating leverage. When revenue falls it's usually bad news, but when it increases the turnaround in profits can be dramatic.

Focusing on this year, a 12.4% increase in total revenue in the first nine months has translated into a 27% increase in gross profit and an 84% increase in operating income. Going forward analysts expect revenue to expand 8.3% in 2018 with EPS up 22%. However, if Caterpillar's sales expand more than expected then you can expect a larger increase in earnings -- that's exactly what happened in 2017.

It's very hard to predict commodity price movements (if you can, then don't bother with equities), so Caterpillar's management can be forgiven if their guidance for equipment sales isn't always entirely accurate. Moreover, it's hard to predict how its dealers will manage their inventory (equipment they buy from Caterpillar) in response to end market conditions.

All of which makes it hard to predict Caterpillar's earnings, so when the cycle turns there can be some significant surprises to earnings expectations. Fortunately, this year the surprises have all been on the upside, and that's been helped by management being conservative with guidance. All these factors together have led to analysts consistently raising estimates in 2017 -- good news for the stock.

It's hard to know where energy and resources prices will go, but leading indicators of North American construction, such as the Dodge Momentum Index  and the Architecture Billings Index, indicate ongoing growth in nonresidential construction.

All told, Caterpillar has had a great 2017, but the question is: Can it continue?  Caterpillar's ability to leverage sales into profit growth means it's all about the incremental sales it can generate from certain key markets. Right now it's all about oil and gas, China, and North American construction.

In addition, on the third-quarter earnings call, management claimed that dealer inventories (in terms of months of sales) are low compared to historical levels -- suggesting that any upside to end-market growth will lead to a sharply increased demand for equipment from dealers.

There's upside potential in Caterpillar's earnings, but it depends on growth in its key end markets. Any weakness in the latter and the stock could suffer.