Please ensure Javascript is enabled for purposes of website accessibility
Log In Help Join The Motley Fool
Free Article Join Over 1 Million Premium Members And Get More In-Depth Stock Guidance and Research
By Adam Levine-Weinberg - May 8, 2018 at 8:30PM

One industry analyst recently opined that department store stocks are running out of upside. However, improving industry conditions may pave the way for further gains in the next year or two.

Paul Trussell of Deutsche Bank told clients that department stores' comp sales results probably cooled off in the first quarter. Furthermore, he doesn't see much upside left for department store stocks after most stocks in the sector -- with the notable exception of J.C. Penney -- rose sharply in the first four months of 2018. 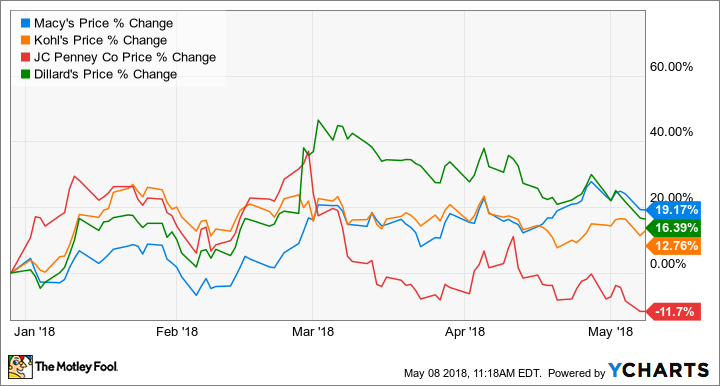 Trussell is right to point out that unfavorable weather may have hurt department stores during the first quarter. That said, the outlook for the rest of the year is solid -- and 2019 could be even better. Furthermore, shares of Macy's, Kohl's, Dillard's, and J.C. Penney still look quite cheap.

The case against department store stocks

In recent years, weather sensitivity has become a big issue for department stores. Cold weather is good during the late fall, when retailers are trying to sell coats, scarves, boots, and hats. Indeed, a cold snap in late 2017 propelled department stores to a strong holiday season. By contrast, department stores' racks are filled with spring clothing styles by March. Severe winter weather in that part of the year is terrible for business.

Trussell notes that large swaths of the country had bad weather in March and April. This probably hurt sales significantly.

Indeed, whereas the 2016-2017 winter season was fairly mild outside of the Pacific Northwest and parts of New England, much of the Midwest and Northeast faced unusually severe weather during the 2017-2018 winter season. To make matters worse, most of this bad weather came late in the season, when department stores were already transitioning to spring merchandise.

The timing of Easter (earlier in April) may have also negatively impacted department store sales trends, according to Trussell. As a result, the analyst doesn't see much value in department store stocks, many of which are trading near their 52-week highs.

It's not just about one or two quarters

It's certainly possible that department stores will miss investors' expectations for the first quarter due to unfavorable winter weather. That said, they face extremely easy comparisons. Shares of Macy's, Kohl's, Dillard's, and J.C. Penney all plunged last May after department stores posted weak comp sales results across the board in Q1 2017.

More importantly, investors shouldn't let a single quarter of results determine their buy and sell decisions. Several converging trends suggest that department stores' sales and earnings results will continue to improve over the next couple of years.

First, Bon-Ton Stores just became the first department store company to fail since the Great Recession. The company is in the midst of liquidating its stores, putting roughly $2.5 billion of annual sales volume up for grabs by the middle of fiscal 2018. Kohl's has a particularly large store overlap with Bon-Ton, but Macy's and J.C. Penney also have meaningful opportunities to gain sales after Bon-Ton shuts down.

Second, consumers are benefiting from a combination of low unemployment and lower taxes. Many taxpayers have already gotten a boost to their take-home pay thanks to lower withholding. Others may be in line for big refunds next spring. This bodes well for consumer spending.

Third, many department stores are testing and rolling out new initiatives to get more customers into their stores, boosting sales and earnings. For example, Kohl's has started using some stores as return depots for Amazon.com. In other locations, it is carving out space from its stores to make room for Aldi and other high-traffic tenants. Macy's is rapidly opening new "Backstage" off-price stores within its full-line locations to improve sales per square foot. Finally, J.C. Penney has expanded into new categories like toys and appliances to capitalize on store closures by the likes of Toys R Us and Sears Holdings.

The valuations are still compelling

While department store stocks have rebounded from the lows they reached last fall, they still look like great bargains compared to the rest of the market -- assuming that they can capitalize on the sales growth opportunities highlighted above.

These low valuations imply that investors fear the worst is still to come. But if the remaining players are instead set to consolidate their dominance of a slimmed-down department store landscape, then department store stocks still have plenty of room to rise.