The most frustrating kind of investment out there is one that looks to have potential, but continues to squander it. Nabors Industries (NYSE:NBR) is an example of this kind of company, and its most recent earnings report was another instance of why it is so vexing.

Let's take a look at Nabors' first-quarter report to see why this company should be better, but always seems to be backsliding. 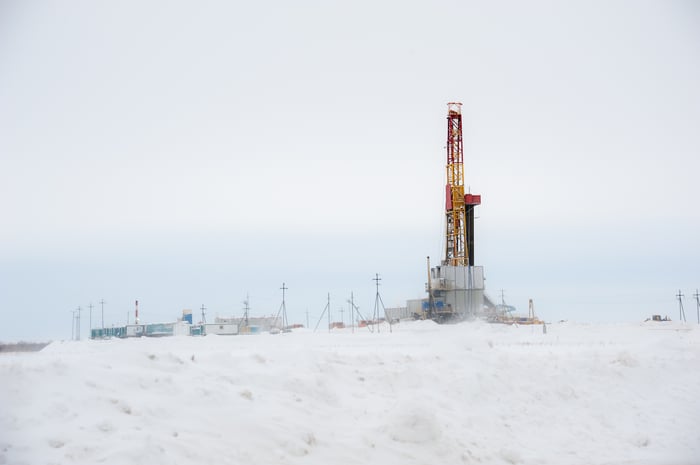 Nabors' earnings were a lot of the same thing we have seen for the past year. Revenue continues to rise from increased drilling activity and its high-specification rigs keep getting work from customers. This past quarter, the utilization rate for its U.S.-based high-spec rigs was 80%.

At the same time, though, that revenue continues to be offset by high operating costs, low utilization for its legacy fleet, and ever-growing interest payments on its debt load. Nabors' utilization rates for its non-high-spec rigs in the lower 48 states, offshore, and Alaska were 13%, 19%, and 23%, respectively. These low rates mean there is a ton of idle equipment just eating into any margin that its productive assets can generate.

The one encouraging sign in this past quarter is that its operations in Canada and international are picking up again. A lot of its gains in international activity have to do with its SANAD joint venture with Saudi Aramco that started operations on Dec. 1 of last year. Its other investments, notably the all-stock deal to buy rig services company Tesco, are still struggling to turn a profit, though. 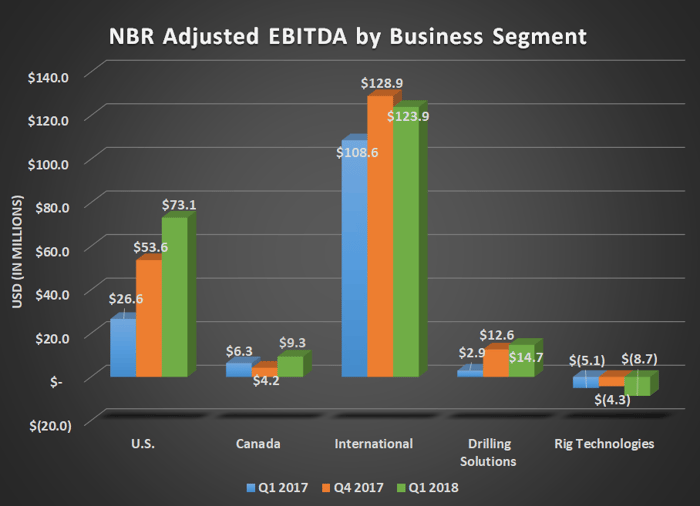 It seems that no matter how much the company's operating metrics improve, Nabors just can't make a dent in its debt load. The company's cash flow wasn't enough to cover its interest payments and capital expenditures and management had to add another $200 million to its debt load to cover its costs. At the end of the quarter, the company's net debt-to-capital ratio and interest coverage ratio both deteriorated to 58.8% and 2.7, respectively.

As has been common in quarters past, CEO Anthony Petrello put as best of a spin as he could on these results and highlighted that he thinks this could be the pivotal turning point investors have been waiting for:

This quarter represents the first full quarter of operations by SANAD, our land drilling joint venture in Saudi Arabia. I would like to express how pleased our entire organization is with the efficiency of the integration and most importantly, the level of cooperation from our partner, Saudi Aramco.

Regarding the other facets of our operations, I am particularly pleased with the substantial progress achieved in improving the profitability of our US lower 48 operations. Our expectation of continued progress, in combination with the increasingly favorable outlook for all of our other segments, reinforces our confidence in achieving our vision 2020 goals of reducing our leverage and restoring returns on capital. The near-term presents some challenges. But absent a sharp contraction in oil prices, I believe as the year progresses we could experience each of our operations growing concurrently, a rather rare occurrence during my time at Nabors. 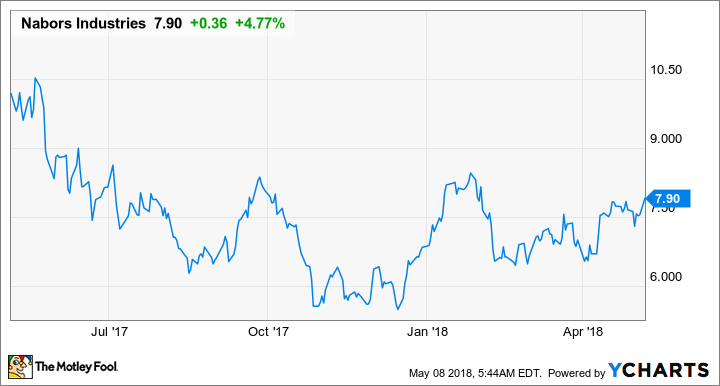 Have to see it to believe it

It's great to hear that management has a stated goal to reduce leverage and improve shareholder returns by 2020, and increased activity in the global oil market is an encouraging sign that there will be a market to support those goals. The trouble is, Nabors' management has been saying since 2012 that its No. 1 is to reduce leverage, and yet the company's leverage metrics are worse today than they were back then.

Sure, oil prices crashing a few years back threw wrench into those plans, but it's still incredibly odd that the company continues to hang on to so many legacy rigs that don't meet today's drilling needs. All these rigs do is sap profitability. Even if we were to see a significant uptick in drilling activity, it's hard to envision an oil & gas producer taking on one of these legacy rigs.

Perhaps rising oil prices and a tightening rig market will give Nabors the cash to finally pare down its debt load. From an investor's perspective, though, the company has been promising to do that for so long that I would want to see actual evidence of it first before even considering this stock.