Please ensure Javascript is enabled for purposes of website accessibility
Log In Help Join The Motley Fool
Free Article Join Over 1 Million Premium Members And Get More In-Depth Stock Guidance and Research
By Danny Vena - Updated May 10, 2018 at 8:27AM

Walmart beat out Amazon in the race to acquire India's e-commerce leader. But was the $16 billion price tag worth it?

Ending months of speculation, the world's largest retailer, Walmart Inc. (WMT -6.79%) announced Wednesday that it has acquired a 77% stake in India's biggest online retailer, Flipkart, for $16 billion. Gaining control of India's leading online seller was an important part of Walmart's strategy in the region, given that India has the world's second-largest population at 1.3 billion people.

It was critical for Walmart to not cede Flipkart to its main e-commerce rival, online juggernaut Amazon.com (AMZN -7.16%), which was also vying to land the homegrown Indian startup. If Amazon had succeeded, it would have given the company control over an estimated 80% of the country's nascent online market, which is expected to grow rapidly over the next several years.

But some are wondering if Walmart paid too much. 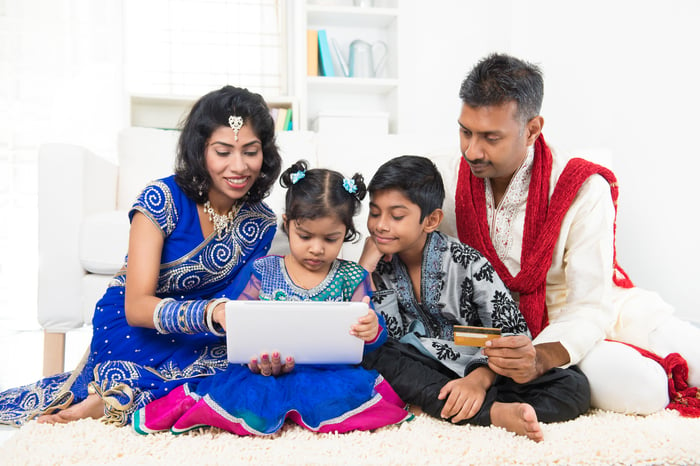 In the wake of the announcement, Walmart shares are selling off, with the company shedding more than $9 billion in market cap as investors digested the impact of the deal. Shareholders may simply be having a knee-jerk reaction to the sheer size of the purchase, but it may be the deal's effect on near-term results that has them concerned.

Walmart said it expects the purchase to be completed by later this year, subject to regulatory approval, and once the deal closes, Flipkart "will be reported as part of Walmart's International business segment." The transaction is expected to reduce the company's full fiscal-year earnings per share by $0.25 to $0.30 if the deal is completed in Walmart's second quarter. For the following year, the cost goes even higher, with a headwind of about $0.60 per share.

Another cause for concern may be Flipkart's losses. The company is not yet profitable, which is partially the result of its bruising battle for e-commerce prowess with Amazon. The company reported revenue that grew 29% year over year to $3.09 billion, but lost a whopping $1.3 billion for the fiscal year that ended in March 2017, the most recent figures available.

A look at the potential in India might help to put this deal into perspective. India is among the fastest growing major economies worldwide, up 7% last year, compared to the overall global economy, which increased 2.9% in 2017. It is expected to be the world's third-largest economy by 2027, surpassing Japan, and the robust growth is estimated to continue at a rate of 7% or more over the next decade.

One of the biggest contributors to this growth is the country's emerging middle class, which analysts predict will see accelerating expansion. Some believe that the size of India's middle class could even surpass that of the U.S. by 2022. Another important element is India's young, tech-savvy population -- more than two-thirds of the country's inhabitants are under the age of 35.

These factors could result in a boom in e-commerce adoption. Online sales in the country are predicted to increase at a compound annual growth rate of 30% over the next decade, climbing to $200 billion, up from only $16 billion in 2016. While e-commerce in India accounts for just 2% of total retail sales today, it's expected to grow to 12% by 2026.

India is one of the most attractive retail markets in the world, given its size and growth rate, and our investment is an opportunity to partner with the company that is leading transformation of eCommerce in the market ... We are confident this group will provide Flipkart with enhanced strategic and competitive advantage.

Did Walmart pay too much?

In the final analysis, Walmart may have decided that it was unwilling to relinquish an opportunity of this magnitude to Amazon. It's also important to remember that the company was initially criticized when it purchased Jet.com, with some saying the company dramatically overpaid in the $3.3 billion acquisition of the online retailer. Those critics have since been silenced, as the deal has proved to be an undeniable success.

In a conference call to discuss the purchase, McMillon said the deal was "setting the company up for growth and profits in the future." While the deal may have come with a hefty price tag, the potential opportunity is undeniable.

It's easy to armchair-quarterback the deal. It's important to consider, however, that if Amazon had won its bid to acquire the company and taken firm control of India's budding e-commerce market, the opportunity cost for Walmart to make a move in India might have been much higher.