Gold Resource Corporation (NYSEMKT:GORO) stock was under considerable pressure until April, when it picked up momentum and ended the month with solid 12.4% gains, according to data provided by S&P Global Market Intelligence. The strong reversal has left investors wondering whether Gold Resource is headed for better days, especially after the gold miner reported strong sales and profits for the first quarter earlier in May.

Gold Resource shares took off mid-April after the miner announced its preliminary numbers for the first quarter and outlook for fiscal 2018. Some numbers to note were:

Investors cheered the preliminary report for two major reasons. First, gold prices edged higher in the past year or so, which means the miner's Q1 top-line growth was likely to be strong. Second, higher production of copper, lead, and zinc was good news, as the three metals combined contributed 49% to Gold Resource's revenue in 2017. 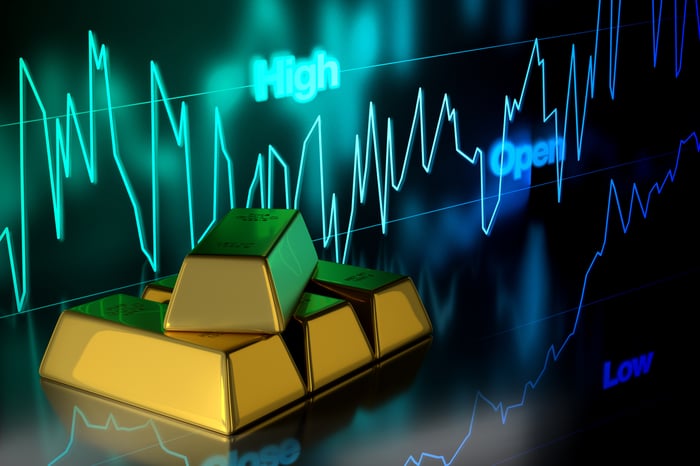 Gold Resource didn't disappoint when it released its first-quarter report on May 1: Its sales and net income came in 32% and 25% higher, respectively, year over year, backed by higher average realized prices for not just gold, but also the three non-precious metals.

There was another important update for Gold Resource investors in April: The miner released its initial gold reserves report for Isabella Pearl, one of its four Nevada mines that are currently under development.

Gold Resource is banking on Isabella Pearl for growth, as the project is awaiting final production permits. The company has bumped up its total proven and probable gold reserves by 135% and estimates its annual gold production to increase 100% once the mine becomes fully operational.

While Gold Resource's outlook points at lower gold and silver production for 2018, Isabella Pearl could be a game changer in the near future. Projections for the mine look even more compelling when you consider that it'll be the company's third operational mine after the two currently running in Oaxaca, Mexico.