Please ensure Javascript is enabled for purposes of website accessibility
Log In Help Join The Motley Fool
Free Article Join Over 1 Million Premium Members And Get More In-Depth Stock Guidance and Research
By Asit Sharma - Updated May 11, 2018 at 8:57AM

A look back at McDonald's decision to transform its balance sheet just as it launched a turnaround plan.

The following chart reminds me of the "hill" feature on the treadmill I use on days when the weather prevents me from running on trails near my house: 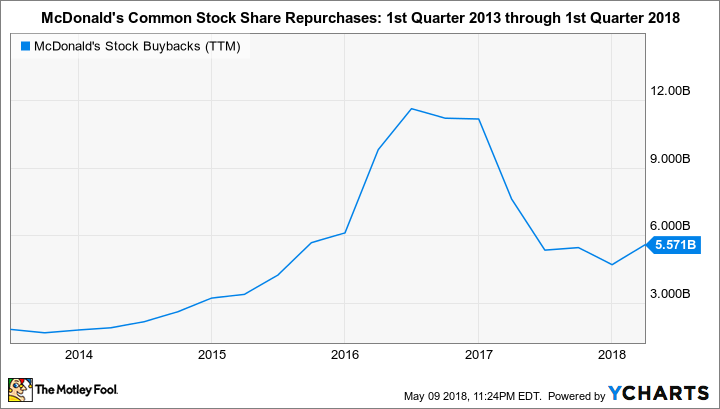 It's so painful to attack that hill! Ultimately, I know the effort will benefit me; I'm just loath to face the incline without earbuds and my playlist of 1970s Brazilian pop at hand. Similarly, this chart of McDonald's (MCD 0.54%) stock buybacks represents a great expending of resources in unusual fashion.

Specifically, the image reflects management's decision to return $30 billion to shareholders through dividends and share repurchases within the three years ending in 2016. During that period, McDonald's bought back $20.5 billion worth of its common stock, gilding the action with $9.5 billion in common stock dividends distributed to shareholders.

McDonald's actually boosted a previously announced $20 billion program by $10 billion early in CEO Steve Easterbrook's tenure, announcing as much to shareholders during the company's investor day in November 2015. At the time, Easterbrook had launched an ambitious turnaround plan and was still unproven at the helm, having assumed the CEO position only eight months earlier.

Why did the global behemoth shower shareholders with largesse at such a crucial juncture? I've always believed that the action was taken in order to stave off corporate activists who were certainly lurking in the background during that period, as the company badly needed to stem declining store traffic and lift comparable-store sales.

Major repurchase programs can mollify activist hedge funds, as open-market buying activity helps stabilize and even drive up share price. More pertinently, a huge program like McDonald's buyback of 2014-2016 is designed to encumber an organization's balance sheet, adding so much debt that potential activists can't leverage the company further to fund their own turnaround plans.

Logically, then, McDonald's borrowed rampantly to meet its promised goal to shareholders. The action seriously degraded the company's previously sterling corporate bond credit rating. McDonald's is still considered investment-grade, the rating assigned to the most creditworthy of corporate debt issuers, though just barely. Its rating fell to "BBB" status at the major debt rating agencies during the buying program, just a few notches above non-investment-grade, or "junk" status. It remains at these levels today.

So, was this massive exercise in shareholder return worth it? Though McDonald's stock is down roughly 4% so far in 2018, since the beginning of 2015, shares have averaged a 25% annual return. McDonald's has for the most part acquired its shares at attractive prices and avoided the cardinal misstep of purchasing shares for the treasury only to watch them drop on the open market.

Second, pulling its common stock off the exchanges to such a high degree has undoubtedly helped stabilize "MCD" shares during the company's turnaround under Easterbrook. Demand for McDonald's stock remains strong, but supply has diminished by roughly 17% since the beginning of 2014, from nearly 1 billion average diluted shares outstanding, to 815.5 million as of March 31, 2018.

Ultimately, by plying shareholders with an already generous dividend and rich buybacks, supporting share price, and proactively warding off activists, McDonald's purchased the space that management needed to implement its plan to modernize the aging burger chain. Fast-forward to today, and you'll see that investors aren't worried about existential threats any longer; now they're focused on menu construction and opportunities like local delivery in the U.S.

If you're not a McDonald's shareholder, you may be surprised to learn that while the company has firmly regained its status as the leader in the quick-service industry, it hasn't ended its plump dividends nor curbed its appetite for its own shares. And it hasn't stopped borrowing, either.

McDonald's current three-year program, ending in 2019, aims to return $24.0 billion to shareholders. At its current cadence, this will average out to roughly $3.2 billion in dividends, and $4.8 billion in share repurchases, annually. In the last three years, McDonald's has effectively doubled its debt load, from $14.9 billion at the outset of 2015, to $29.5 billion at year-end 2017.

Thus, McDonald's will continue to return to the debt markets to fund its 2017-2019 program, though management will stop shy of pushing the company's borderline investment-grade rating to junk status. And one can wager that after 2019, the organization's shareholder return efforts will finally shrink to a more sustainable size.

Looking back, I'm struck with the thought that if management had failed to execute its turnaround, the risk in McDonald's high leverage may have been exposed in rather bald fashion. I personally believe that beyond providing for an attractive dividend, excess cash is better utilized for reinvestment in a company's core business, or perhaps to fund a logical acquisition strategy. Yet time has proven that in this case, the risk in sacrificing McDonald's pristine credit was worth it.  After all, the company is still in charge of its own destiny.