Please ensure Javascript is enabled for purposes of website accessibility
Log In Help Join The Motley Fool
Free Article Join Over 1 Million Premium Members And Get More In-Depth Stock Guidance and Research
By Todd Campbell, Daniel Miller, and Leo Sun - May 11, 2018 at 9:16AM

Adding these growth stocks to portfolios at these ultra-cheap valuations could boost your long-term returns.

Sometimes, earnings grow faster than stock prices. And other times, growth stocks go on sale even though revenue is still climbing. In both cases, P/E ratios can fall to levels that make growth stocks look more like value stocks. When that happens, buying shares can lead to market-beating returns, so we asked these three Motley Fool investors if there are any growth stocks on their radar that are value-priced. They responded by recommending Celgene Corp. (CELG), Goodyear Tire & Rubber (GT -2.97%), and Apple Inc. (AAPL 2.04%). Are these growth-stock bargains worth adding to your portfoio?

A top growth stock that's in the bargain bin

Todd Campbell (Celgene): Growth at bargain-basement prices is a bit of an oxymoron because value stocks usually aren't double-digit growers. That's not the case for Celgene, though. 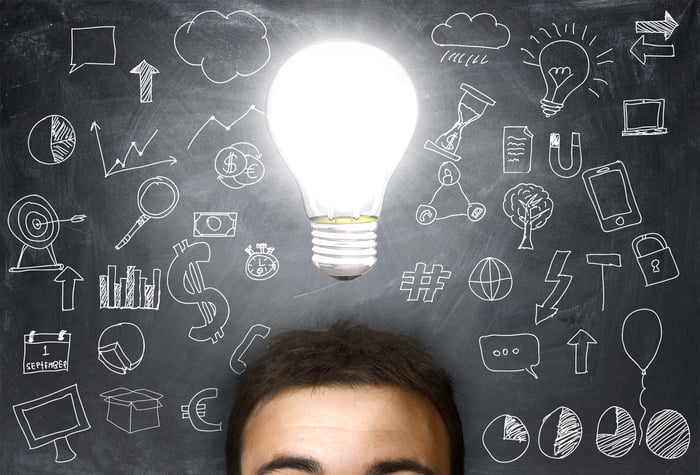 Even though Celgene reported 20% year-over-year sales growth last quarter, its shares are trading at a forward P/E ratio of only 8.1. That's a cut-rate valuation for a company that expects to deliver sales of at least $19 billion in 2020, up from $13 billion in 2017.

The low valuation is a result of a big setback Celgene suffered on a lead drug candidate in its pipeline, ozanimod. Celgene had filed for FDA approval of ozanimod for multiple sclerosis, a mega-blockbuster indication, but the FDA rejected the application, and that pushes out the timeline for a potential green light.

Celgene says it will refile for approval early in 2019, and if so, then ozanimod could begin chipping away at sales in the indication in 2020. Until then, there's plenty going on at the company that could spark a rally in its share price again.

For instance, the company recently acquired Juno Therapeutics to get its hands on a pipeline of chimeric antigen receptor T-cell gene therapies (CAR-Ts). CAR-Ts represent one of the biggest recent advances in treating blood cancer, and depending on trial results, the first CAR-T from this collaboration could be filed for approval next year. Similarly, Celgene is partnering with bluebird bio (BLUE 6.19%) on bb2121, a CAR-T for multiple myeloma. So far, bb2121 is delivering 90%-plus response rates in heavily pre-treated patients, and if that success continues, it could end up on regulators' desk for approval next year, too.

In 2018, Celgene thinks sales will be $14.8 billion, and that adjusted EPS will be $8.45. In 2017, sales and EPS were $13 billion and $7.44, respectively, so the guidance reflects a company that's far from struggling. Given the sell-off and the potential for sales to climb significantly through 2020, buying Celgene's shares could be smart.

Daniel Miller (Goodyear Tire & Rubber): You've likely heard new-vehicle sales in the U.S. are currently plateauing, which makes it difficult to sell a near-term growth story for automakers. Nonetheless, the auto industry has trends that could provide strong growth for Goodyear despite the company's being sold off with the rest of the industry -- it currently trades at a paltry forward P/E of 6.6, per Morningstar estimates.

Total sales are plateauing, but the sales mix is wildly shifting in favor of larger vehicles such as SUVs, crossovers, and pickup trucks. That means more larger tires on the road, and that means better margins for Goodyear. In 2009, light trucks were 45% of the U.S. new vehicle market; that exploded in the years since to 68% during the first quarter of 2018. Further, LMC Automotive predicts light trucks will generate roughly 73% of the market as soon as 2022.

A sales mix in the Americas with such a large percentage of light trucks is one growth catalyst for Goodyear, but there's a long-term catalyst as well: driverless vehicles. Consider that by 2030, 25% of global miles traveled will be shared, according to The Boston Consulting Group, and the autonomous market will be a $7 trillion business by 2050, according to an Intel report. As the market shifts to fleet ownership, rather than individual consumers, Goodyear could leverage its physical-store tire services to sign partnerships with fleet owners, which could become a lucrative business.

Granted, the driverless-car future is an uncertain one, but one thing is certain: Tires, and other products associated with driverless cars, will become much more complex. That means growth -- long-term growth -- for Goodyear if it can leverage its distribution network, innovative tires, and service bays to carve out its place in the market.

Leo Sun (Apple): Some investors claim that Apple's high-growth days are over. Yet the tech giant posted accelerating double-digit sales growth over the past three quarters, and analysts expect its revenue to rise 14% this year. Apple's earnings are also expected to climb 24% this year.

Those are remarkable growth figures for a stock that trades at less than 16 times this year's earnings. Moreover, Apple pays a forward dividend yield of 1.4%, and it has hiked that payout annually for five straight years. It also recently announced a new $100 billion buyback -- which is enough to repurchase over 10% of its outstanding shares at current prices.

Apple still depends heavily on the iPhone, which generated 62% of its sales last quarter. But its services revenue -- from Apple Pay, Apple Music, iTunes, its App Store, and other services -- also jumped 31% annually during the quarter and accounted for 15% of its top line. Apple also stated that its paid subscriber base grew by 100 million in the last year to 270 million. 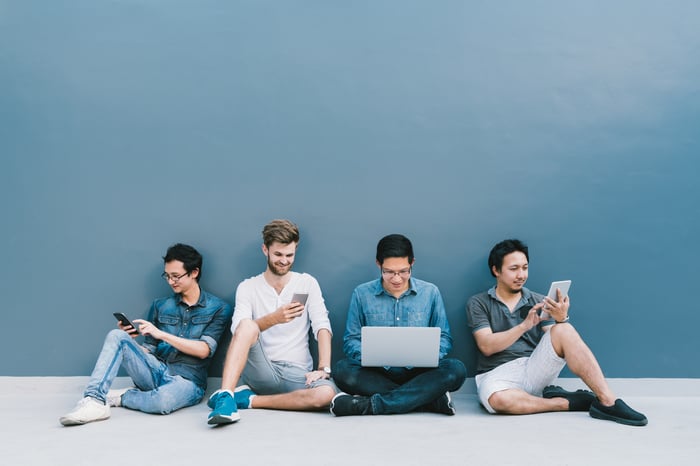 That massive user base gives Apple the foundation to launch a wide variety of new services for adjacent markets -- like streaming video, online news, and healthcare -- to lock in users and reduce its dependence on hardware sales. That's an advantage none of its smartphone rivals can match.