Please ensure Javascript is enabled for purposes of website accessibility
Log In Help Join The Motley Fool
Free Article Join Over 1 Million Premium Members And Get More In-Depth Stock Guidance and Research
By Rich Smith - May 12, 2018 at 7:15AM

What is Boeing's next move?

When life gives you lemons, make lemonade -- then issue a press release about it.

It's been two years since DARPA, America's Defense Advanced Research Projects Agency, announced it was funding a project by Aurora Flight Sciences to build an electrically powered, fan-propelled, vertical take-off and landing prototype aircraft called "LightningStrike." The new plane, equipped with Rolls-Royce engines and Honeywell generators to power its fans, would be able to launch (and land) vertically, tilting its fans horizontal once airborne for flight.

Aurora planned to begin full-scale test flights this year, but before that could happen, Boeing (BA 0.89%) swooped in and bought the company last year. At the time, Boeing said it was buying Aurora for its tech and its experience as a "world-class innovator, developer and manufacturer of advanced aerospace platforms" -- but inheriting the DARPA contract, valued at $89 million  was certainly a plus. 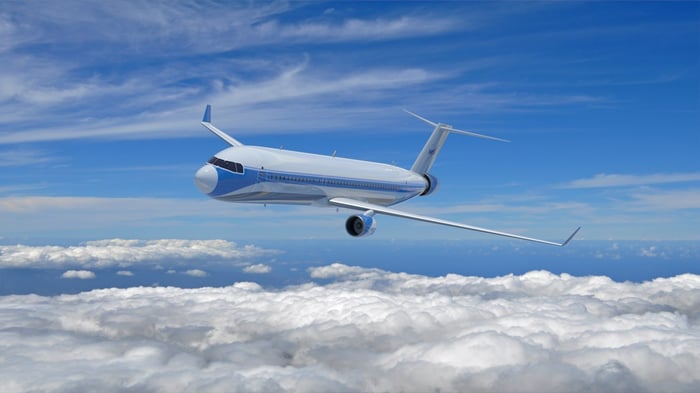 Unfortunately, that contract just went up in smoke.

On Thursday, Aurora issued a press release  advising that "it has reached an agreement with the Defense Advanced Research Projects Agency (DARPA) to transition its X-Plane program technology to commercial applications." Aurora characterized this agreement as "expanding on DARPA's vision" and a move to take advantage of "completely new markets." The folks at Aviation Week, however, had a different take on the news.

To hear AW tell it, what really happened last week is that DARPA "canceled" plans to advance LightningStrike to "Phase 3" and conduct full-scale flight tests, which had suffered setbacks related to the plane's electrical generator, and had fallen behind schedule. DARPA also noted that it was having trouble finding a "service partner" (i.e. a military service) to develop LightningStrike into an official Pentagon program. AW described this decision as "a blow" to Aurora and its new owner Boeing -- and it sure sounds like it could be.

Is this the end for LightningStrike? Not necessarily. In a statement to AW, DARPA noted that there is "strong interest in a civil or commercial transition" for LightningStrike. The plane's ability to launch and land from an airstrip no bigger than a parking space, for example, then fly from place to place under remote control, would make the aircraft ideal for service as a "drone" air taxi. And in fact, Uber  has already expressed interest in using LightningStrike for this purpose. Even prior to DARPA's decision to exit the project, Aurora had been in talks with Uber to build a fleet of 50 VTOL aircraft for Uber to test "drive."

Boeing's new subsidiary also has a deal with NASA "to perform a comprehensive evaluation of the Single-aisle Turboelectric Aircraft with Aft Boundary Layer propulsion (STARC-ABL) aircraft concept." Like LightningStrike, STARC-ABL would utilize turboelectric propulsion. Unlike LightningStrike, STARC-ABL would use electric motors to supplement, not replace, an airliner's usual gas turbine airplane engines.

And of course, there could be other civil or commercial opportunities we haven't heard of yet.

On the other hand, DARPA's decision does seem to throw into question a second Aurora contract that is even bigger than the one with DARPA.

Last summer, before Boeing announced its purchase of Aurora, the soon-to-be-subsidiary was named as one of two recipients of a contract with the U.S. Air Force to support the latter's "Aerospace Systems Air Platform Technology Research" project. This contract, which would run through 2025 and be worth up to $499 million for the companies participating (Northrop Grumman also has a piece of the contract), pays Aurora to conduct research into "autonomy, electric propulsion, advanced manufacturing, multi-vehicle coordination, and advanced multidimensional optimization" for use in military drones.

The ASAPTR contract is potentially a very lucrative deal for Boeing. I say this not just because of the up-front money (which is substantial, and could even be more than Boeing paid to acquire Aurora, since that sum, while still not disclosed , was apparently not large enough to be considered "material" to Boeing), but because of the potential for Boeing to win follow-on manufacturing contracts if Aurora's research goes well.

And yet, those words from DARPA do raise concerns: No service partner interested in Aurora's tech... That could mean that, eight months after awarding Aurora the ASAPTR contract, the Air Force -- definitely a military service -- is no longer interested in what Aurora has to offer.

And if that's the case, then no matter how little Boeing paid to acquire Aurora, it may still have paid too much.