Most of the time, artificial intelligence (AI) is discussed with respect to how it will make our technology devices better, how it'll usher in driverless cars, or even how dangerous it could be for warfare. But AI capabilities could also drastically improve the efficiency and quality of healthcare.

Algorithms, image recognition technology, natural-language processing, and other AI technologies could end up making our healthcare cheaper, speed up the time it takes to develop new drugs, and even help diagnose diseases in collaboration with doctors. Here's how. 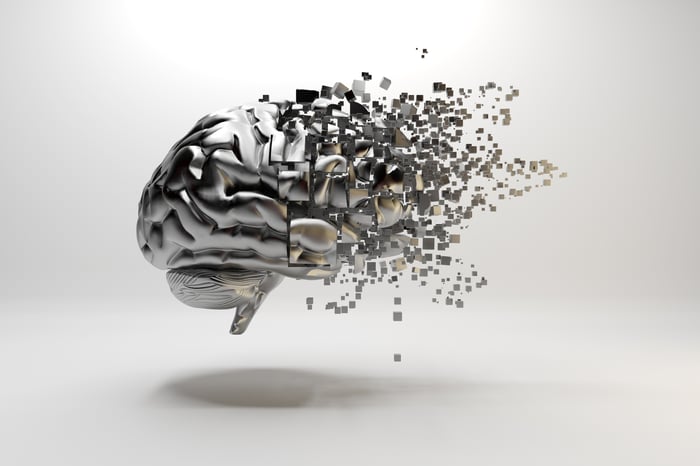 It takes pharmaceutical companies an average of 10 to 15 years to discover and develop a new drug. Some companies, including International Business Machines (NYSE:IBM), believe that AI can drastically reduce the time to find new drugs by sifting through vast amounts of genetic and clinical data.

IBM says that its Watson for Drug Discovery uses natural-language processing to "read millions of pages" and comprehend contextual meaning in the research.

In one recent instance, the Barrow Neurological Institute used Watson for Drug Discovery to find unidentified genes and proteins that may be linked to amyotrophic lateral sclerosis (ALS). Within a few months, Watson discovered five RNA-binding proteins (RBPs) that had never before been associated with ALS.

"Overall, we successfully used IBM Watson to help identify additional RBPs altered in ALS, highlighting the use of artificial intelligence tools to accelerate scientific discovery in ALS and possibly other complex neurological disorders," researchers at Barrow noted in a paper recently published in the journal Acta Neuropathologica.

Some drugmakers are already betting on this type of AI. Last year, GlaxoSmithKline said the time it takes to target a disease and then find a molecule to fight it could be reduced from five and a half years to just one year. The company told Reuters that not only will AI help reduce the time it takes to develop drugs, but it could also reduce their costs.

A team of pathologists at Harvard recently created an AI system to help them more precisely diagnose breast cancer. The AI technique helped the doctors increase their accuracy from 96% to 99.5%. That slight percentage increase is notable, because it means an additional 68,000 to 130,000 women will receive more accurate diagnoses each year.

Similarly, IBM's Watson for Genomics has been tested by oncologists at the University of North Carolina's Lineberger Comprehensive Cancer Center. Watson for Genomics looked at 1,018 patient cases and agreed with the physicians' conclusions more than 99% of the time, but in more than 300 instances Watson found additional genomic events of potential significance.

"Molecular tumor boards empowered by cognitive computing could potentially improve patient care by providing a rapid, comprehensive approach for data analysis and consideration of up-to-date availability of clinical trials," the researchers said last year in a published paper in The Oncologist.

The Kaiser Family Foundation estimates that the U.S. spends about 18% of its GDP on healthcare expenses, a disproportionate amount relative to its wealth. In fact, other wealthy countries spend about half as much per person on healthcare, on average, as the U.S. does.

But AI could help with these costs. Artificial intelligence can be used for administrative tasks like voice-to-text transcription, which could help healthcare companies and hospitals eliminate or reduce the need to write chart notes, prescriptions, and order tests, according to Accenture.

For example, DeepMind, an AI company owned by Alphabet's (NASDAQ:GOOG) (NASDAQ:GOOGL) Google, partnered last year with the U.K.'s National Health Service to use AI algorithms to read medical scans. DeepMind isn't making decisions on patient care from the scans just yet, but as the AI continues to learn from the scans, it could be used in the future to make recommendations for doctors, which would free up countless hours for healthcare professionals.

New workflow-assistant capabilities like this could reduce work time by 17% for doctors and 51% for registered nurses, according to Accenture's research. By making the overall healthcare industry more efficient, artificial intelligence applications could create $150 billion in annual healthcare savings in the U.S. by 2026.

Play the long game on this one

I don't know of any tech stocks at this point that are pure plays in the AI healthcare space. Instead, investors should keep an eye on how IBM, Alphabet, and other major tech players are using artificial intelligence to change the healthcare industry.

The size and scope of the healthcare market, both in the U.S. and abroad, means there are lots of opportunities for companies to benefit. But investors should remember that this market is only beginning to grow, and IBM, Google, and others likely won't break out their healthcare sales for quite some time. Instead of investing in these companies solely based on what they're doing in the healthcare industry, make a note of how well they're expanding into new AI markets.