Please ensure Javascript is enabled for purposes of website accessibility
Log In Help Join The Motley Fool
Free Article Join Over 1 Million Premium Members And Get More In-Depth Stock Guidance and Research
By Keith Speights - Updated May 14, 2018 at 3:12PM

It's still is too early to mail thank-you notes to the Attorney General, but marijuana investors might want to get them ready.

It's no secret that U.S. Attorney General Jeff Sessions isn't a fan of legalized marijuana. He has repeatedly made statements in opposition to legalizing the drug.

In 2017, he requested that Congress repeal the Rohrabacher-Farr Amendment so the U.S. Department of Justice (DOJ) could use federal funds to prosecute marijuana-related businesses in states that allow legal use of marijuana. Earlier this year, Sessions overturned the policy in place during the Obama Administration that kept federal law-enforcement officials from interfering in states that had legalized cannabis.

But could Jeff Sessions unwittingly help investors in pot stocks make a lot of money over the next few years? As farfetched as that might sound, it's entirely possible. 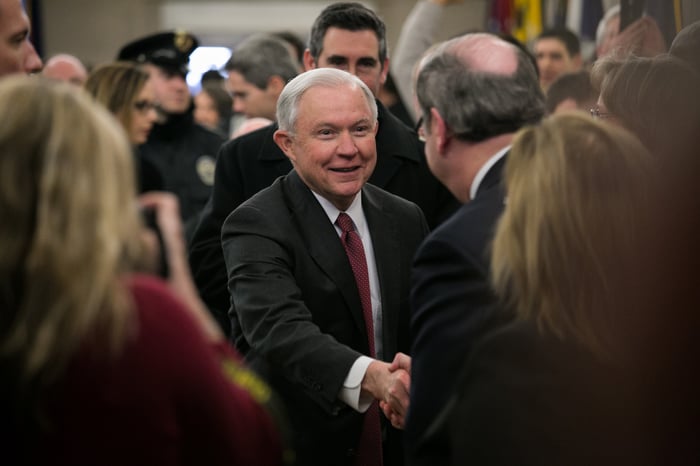 Going a step too far

Sessions' decision to rescind the Cole memo and other Obama administration policies that took a hands-off stance with states that legalized marijuana was a step too far for one U.S. senator. Sen. Cory Gardner, R-Colo., thought that he and Jeff Sessions had an understanding that the federal government wouldn't make a priority of enforcing federal marijuana laws.

After Sessions overturned the previous policies, a stunned Cory Gardner decided to fight back. Sen. Gardner vowed to block all of President Trump's nominees to the DOJ. And it wasn't an empty threat. Gardner used a parliamentary procedure known as a "hold" to prevent votes on DOJ nominees from reaching the Senate floor.

Gardner's home state of Colorado voted to legalize the recreational use of marijuana in 2012, with legalization taking effect in 2014. Since then, marijuana has become a big business in the state. In 2017, marijuana sales in Colorado totaled more than $1.5 billion.

In February, Sen. Gardner lifted his holds on President Trump's nominees for Assistant Attorney General for National Security, United States Attorneys, and United States Marshals as "an act of good faith" as he talked with DOJ officials about ensuring that Colorado's marijuana industry wouldn't be prosecuted. However, he continued to block all other DOJ nominees.

Gardner's strategy paid off a few months later. On April 13, 2018, the senator announced that he and President Trump had struck a deal.

Unlike Jeff Sessions, President Trump hasn't been a vocal opponent of legalized marijuana. When Trump was asked during the presidential campaign about Colorado's legalization of recreational marijuana, he responded that "it's bad," but added that he supported medical marijuana. Later in the campaign, then-candidate Trump stated that marijuana legalization should be "a state issue, state-by-state."

President Trump's agreement with Sen. Gardner appears to reflect his later stance. Gardner stated that he "received a commitment from the President that the Department of Justice's rescission of the Cole memo will not impact Colorado's legal marijuana industry. Furthermore, President Trump has assured me that he will support a federalism-based legislative solution to fix this states' rights issue once and for all."

With this deal in hand, Gardner lifted his remaining holds on DOJ nominees. White House Press Secretary Sarah Huckabee Sanders later confirmed that Gardner's statement about an agreement with the president was "accurate." She added that President Trump is "a firm believer" in states' rights.

Honoring the Cole memo and other Obama-era policies is one thing. But if President Trump follows up on his commitment to Sen. Gardner to support legislation that will permanently allow states' marijuana laws to supersede federal laws, the impact would be huge.

Even though the U.S. marijuana industry has grown significantly, there are few stocks available for investors to buy to profit from the growth. The most attractive alternatives have been and continue to be companies that serve the marijuana industry, like Scotts Miracle-Gro (SMG 2.50%), which provides hydroponics, fertilizers, and lighting systems to cannabis growers. But the risk of federal intervention in states that allow legal use of pot has held back stocks like Scotts Miracle-Gro.

Should Sen. Gardner and others succeed in their efforts to pass legislation that prevents the federal government from interfering with states' marijuana laws, Scotts Miracle-Gro would be a direct beneficiary. However, the impact would go well beyond helping suppliers to the cannabis industry.

It wouldn't be surprising for more U.S.-based marijuana growers to conduct initial public offerings (IPOs). There likely would be a wave of new pot stocks entering the market. And if the Canadian cannabis industry is a good indicator of what might happen in the U.S., some of those stocks would quickly boast significant market caps.

Speaking of Canada, there probably also would be an immediate expansion by Canadian marijuana growers into the U.S. Aphria (NASDAQOTH: APHQF) was one of the few Canadian marijuana growers to build significant operations in the U.S. However, the company scaled back its U.S. presence after the Toronto Stock Exchange threatened to delist stocks of marijuana businesses with U.S. operations that violated federal anti-marijuana laws. If Cory Gardner is successful, it's a pretty safe bet that Aphria will jump right back into the U.S. market, along with many of its peers.

There's no guarantee that all of this will happen, of course. Even if President Trump supports a bill to revise U.S. federal cannabis laws, it might not pass. However, there's a higher likelihood of change now than in the past -- thanks in large part to the aftermath resulting from Jeff Sessions' decision to rescind the Cole memo. Marijuana investors could receive a big gift in the not-too-distant future. If so, Jeff Sessions could become the most unlikely benefactor ever to the U.S. cannabis industry.