Please ensure Javascript is enabled for purposes of website accessibility
Log In Help Join The Motley Fool
Free Article Join Over 1 Million Premium Members And Get More In-Depth Stock Guidance and Research
By Leo Sun – May 14, 2018 at 12:00PM

Marketing dollars are flowing from TVs onto smaller screens.

That's why it wasn't surprising when eMarketer recently reported that advertisers would spend more money on mobile ads than TV ads in 2018, and that the gap would widen over the next four years. eMarketer expects this transition to bolster ad prices as demand outstrips supply. 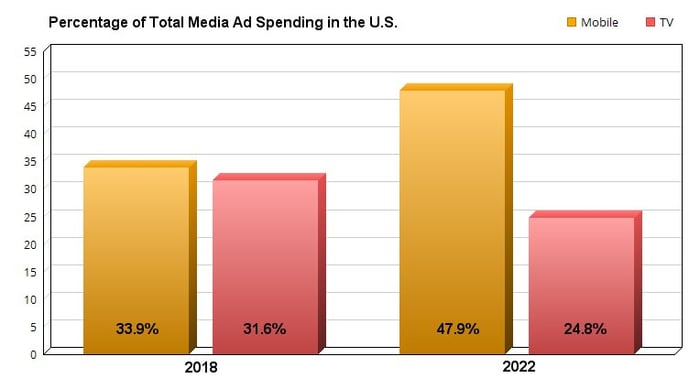 That's great news for Alphabet (GOOG -1.16%) (GOOGL -0.92%) subsidiary Google and Facebook (META -1.11%), which hold a near-duopoly in internet ads. Last December, research firm Pivotal estimated that the two companies accounted for 73% of all digital advertising in the U.S., up from 63% in the second quarter of 2015. That growth could hurt smaller digital ad players like Twitter and Snap.

Google's YouTube and Facebook's Watch, a new video platform the social network launched last August, will also likely pull more advertisers away from TV networks. The networks are fighting back with their own mobile apps, but they'll face a tough uphill battle over the next few years.