Please ensure Javascript is enabled for purposes of website accessibility
Log In Help Join The Motley Fool
Free Article Join Over 1 Million Premium Members And Get More In-Depth Stock Guidance and Research
By Rick Munarriz – May 14, 2018 at 9:04AM

The cloud-based communications specialist posts its biggest quarter of accelerating revenue growth as a public company and boosts its full-year guidance. You'd be moving higher, too.

One of last week's biggest winners was Twilio Inc. (TWLO -2.35%), moving 24% higher after posting better-than-expected financial results. The provider of in-app communication solutions also provided upbeat guidance for the current quarter, leading at least four analysts to jack up their price targets on the stock.

Revenue surged 48% to a record $129.1 million. It's only the second time the top-line growth accelerated from the prior quarter's year-over-year comparison, and the news took both the market and Twilio by surprise. The reinvigorated growth stock darling was only targeting 32% to 34% in revenue growth for the quarter back in February, and analysts were perched near the high end of that range. The market was clearly impressed, sending the stock to its highest level since late 2016. 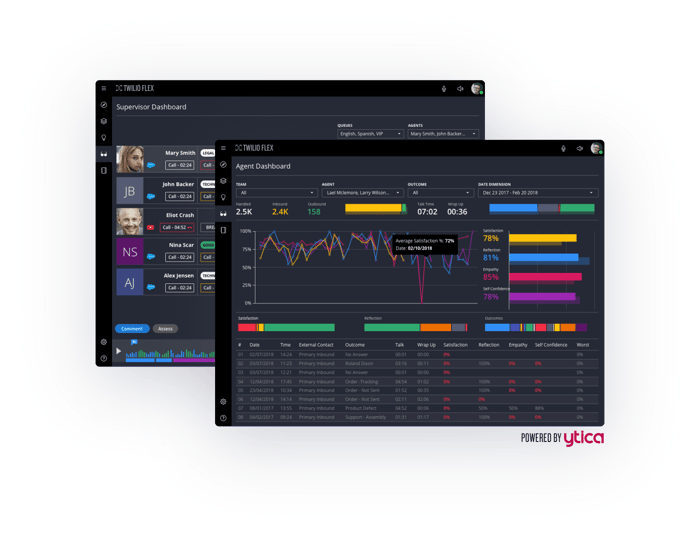 Twilio allows app makers to communicate more effectively with their users without closing out the application. We live in a gig economy, where third-party food delivery services and ridesharing platforms need drivers to communicate with customers. We're in a digital age where folks need quick password resets from the streaming services. Twilio is there, cashing in with every hookup.

There are now 53,985 active customer accounts relying on Twilio to make their apps more efficient, 33% more than it had a year earlier. One would think that expanding its pool of developers would lead it to smaller players, but revenue growing faster than is account growth translates into more revenue being generated per account. Some of Twilio's larger customers have experimented with cheaper in-app communication tool providers, but many come back and expand their reliance on Twilio. Its dollar-based net expansion rate stands at 132% for the first quarter.

Profitability remains elusive at this point in Twilio's growth cycle, but the adjusted net loss of $0.04 a share it posted was less red ink than it was bracing investors for three months ago. Twilio is also understandably increasing its revenue guidance and lowering its expected loss for all of 2018, an outlook that implies that Twilio will turn the corner of profitability on an adjusted basis during the second half of this year.

Wall Street's digging the report. Stephen Bersey at MUFG -- who just two months ago raised his price target from $34 to $43 on the prospects of Twilio's new Flex platform -- is now eyeing $50 as the ceiling. He continues to be excited about Twilio Flex, the first cloud contact center application platform that's programmable at every layer of the stack.

Canaccord's Richard Davis is bumping his goal from $38 to $52. He feels that growth will continue to track ahead of consensus, and that Twilio's own guidance is conservative, something that's not a stretch since it routinely lowballs its reality.

Ittai Kidron at Oppenheimer is lifting his price target from raised his price target from $45 to $50, encouraged by strong metrics across Twilio's entire business. JMP Securities analyst Patrick Walravens is now at the high end of the four analysts after jacking up his goal from $39 to $55 following the blowout quarter and better-than-expected revenue guidance for the current quarter.

Four analysts juicing up their targets in a week with the stock moving 24% higher isn't a big surprise. The stock closing out the week at $53.58 -- ahead of all but Walravens' revised price -- may seem concerning, but it's not. The analysts could've downgraded the stock on valuation concerns, but they all seem encouraged enough by the trend to keep the optimism going. The concerns a year ago that Uber and Lyft were testing rival offerings have been replaced by confidence that Twilio's best-in-class solution will continue to make any shortfalls up in volume. Expectations have now been raised for the current quarter, but Twilio stock -- now having more than doubled so far in 2018 -- is more than up for the challenge.

Why Twilio Stock Was Climbing Today

Should You Buy This Stock That Wall Street Is Projecting Will Double?