Contract chip manufacturing giant Taiwan Semiconductor Manufacturing Company (NYSE:TSM) has been a big beneficiary of the smartphone boom. Smartphones require a wide range of increasingly powerful yet power-efficient chips. This has led not only to an increase in overall chip shipments for TSMC, but also a rise in the value of each chip, amplifying the chip manufacturer's revenue growth for years. 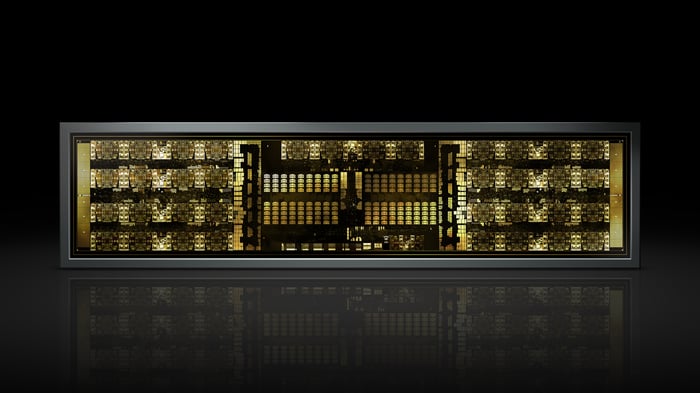 Apple (NASDAQ:AAPL), one of TSMC's largest mobile chip customers, seems to be a clear indicator that the smartphone market is increasingly growth-challenged. In its May 1 earnings report, Apple said that iPhone shipments -- which are almost all powered by Apple-designed chips manufactured by TSMC -- grew by just 3% year over year. Moreover, Apple's guidance seems to suggest that iPhone shipments will drop significantly quarter over quarter and could even be down year over year.

Apple's not the only one suffering, either. According to research from market research company IDC, industrywide smartphone shipments dropped by 2.9% year over year in the first quarter of 2018.

For TSMC, a company that's on track to generate nearly $36 billion in sales this year, a slow upward march in smartphone chip dollar content probably isn't going to be enough to allow the company to consistently deliver the 5% to 10% annual revenue growth to which it has publicly committed.

To that end, the company seems to be doubling down on its efforts to expand beyond the smartphone chip market and into the market for high-performance computing, or HPC, products to deliver that growth.

What does TSMC define as HPC?

TSMC doesn't have a strict definition of HPC, but in the past it has mentioned a wide range of products including graphics processors, network infrastructure processors, game console chips, chips designed specifically for cryptocurrency mining, field-programmable gate arrays, and server processors.

In effect, if it's a blazing-fast chip that consumes quite a bit of power, it's likely an HPC product.

It's not hard to see why TSMC is excited about these markets. The market for server and network processors continues to grow (and TSMC's customers, collectively, have a minimal share, so TSMC's growth can accelerate as its customers take a bigger share), the market for graphics processors is red-hot, and field-programmable gate arrays are seeing increasing adoption in artificial intelligence and other data center tasks.

It really looks like there's a sustainable multibillion-dollar long-term opportunity for TSMC to capitalize on here. In fact, TSMC is so confident that it can win in the market for HPC chips that it expects about half of its 5% to 10% revenue growth target to come from growth in HPC chip sales.

As a contract chip manufacturer, TSMC doesn't have to worry about the particulars of the chip designs for these markets, nor does it have to worry about a go-to-market strategy for these products. It simply needs to position itself as the best manufacturing technology provider so that it can attract the best chip design companies to use its offerings.

For example, TSMC says that it's planning to roll out a version of its 7nm chip manufacturing technology that will explicitly be targeted at high-performance applications. Such an offering, as well as follow-on offerings for its future technologies, should allow TSMC's customers to build more capable, aggressive designs to better compete in the marketplace.

In fact, the high-performance computing variant of its upcoming 7nm technology is so popular that TSMC management has gone on record to say that about half of the roughly 50 chip designs that it'll build using that technology will, in fact, be HPC designs.

TSMC's strategy to diversify its business beyond its core mobile chip manufacturing efforts is a good one, and I believe that TSMC's strong technology development track record, coupled with the strong success it has historically had in both acquiring new customers and retaining them, should allow the company to profit handsomely from the secular growth trends in key high-performance computing areas.

However, it's worth keeping in mind that TSMC's success here depends heavily on its customers building the right products and marketing them properly. Even if TSMC can build the world's best manufacturing and packaging technologies for high-performance chips, there's still a risk that its customers -- through no fault of TSMC -- won't find the degree of success that TSMC seems to be banking on to power its future growth.