Please ensure Javascript is enabled for purposes of website accessibility
Log In Help Join The Motley Fool
Free Article Join Over 1 Million Premium Members And Get More In-Depth Stock Guidance and Research
By Keith Speights – May 15, 2018 at 6:33AM

Investing in stocks can make you a lot of money over time. The average annual return for the S&P 500 is around 10% before adjusting for inflation. That translates to your money doubling on average every seven years or so over the long run.

But some stocks don't take nearly that long to double. Three stocks in particular have doubled investors' money -- and more -- in just the last 12 months. Here's why Nektar Therapeutics (NKTR 5.26%), CRISPR Therapeutics (CRSP 1.33%), and Sarepta Therapeutics (SRPT 0.83%) became such huge winners -- and whether or not their impressive momentum can continue. 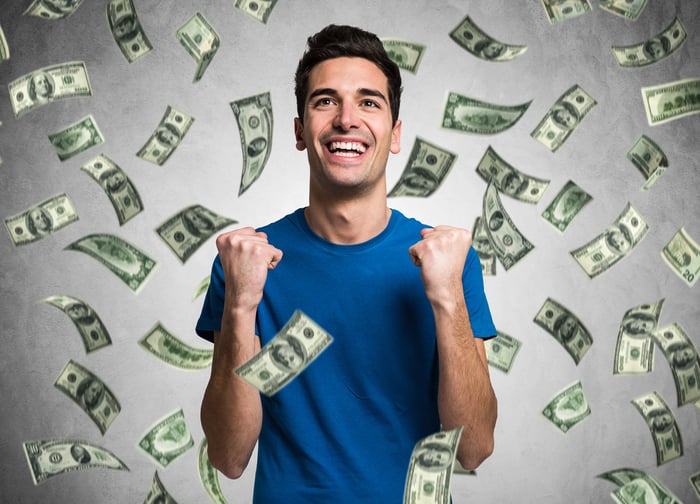 Nektar Therapeutics' stock price has quadrupled over the last 12 months. The biotech's big run began in earnest last November when Nektar announced that it had received a $150 million up-front payment from Eli Lilly for licensing NKTR-358, an autoimmune-disease therapy that's now in a phase 1 clinical study.

That was just the beginning of Nektar's good news. The company announced plans to file for FDA approval of pain drug NKTR-181, a mu-opioid receptor agonist that doesn't have some of the downsides of commonly used opioids. Nektar followed that announcement with great results from a phase 1/2 study that demonstrated the potential for experimental drug NKTR-214 to stimulate the body's immune cells to fight cancer and help other immunotherapies work better in killing cancer cells.

This success for NKTR-214 led to a huge deal with Bristol-Myers Squibb. In February, the big drugmaker announced that it was paying Nektar $1 billion in cash and buying a stake in the biotech, valued at the time at $850 million, to partner on development and commercialization of NKTR-214.

Nektar has given up some of its massive gains since early April. The biotech now claims a market cap of around $14 billion, which reflects high expectations for its promising pipeline candidates. I expect that Nektar could regain its momentum, though, with positive clinical data later this year and FDA approval for NKTR-181.

CRISPR Therapeutics' stock price has more than tripled over the last 12 months. Most of those gains came in the first quarter of 2018. There were three primary catalysts for CRISPR.

First, it develops gene-editing therapies with CRISPR-Cas9, which uses a bacterial enzyme to cut DNA. There have been some issues raised about use of the CRISPR-Cas9 method for gene editing in humans. However, a January article in The Wall Street Journal revealed that Chinese scientists have used CRISPR-Cas9 in humans for several years. This news caused gene-editing stocks like CRISPR Therapeutics to enjoy a nice boost.

Third, CRISPR Therapeutics and Vertex are moving quickly to advance CTX-001 to clinical testing in humans. The two partners plan to initiate a phase 1/2 clinical trial to evaluate the gene-editing therapy in rare blood disorder beta-thalassemia in the second half of this year. They're also on track to begin clinical testing of CTX-001 in treating sickle cell disease this year.

Can CRISPR Therapeutics stock go even higher? I think so. Over the long run, the potential for CRISPR-Cas9 gene-editing therapies is enormous.

Sarepta Therapeutics stock has soared more than 170% over the last 12 months. The trend line for the biotech stock has pointed upward throughout much of the period thanks to the better-than-expected commercial launch of Duchenne muscular dystrophy (DMD) therapy eteplirsen, branded as Exondys 51 in the U.S.

Eteplirsen won a controversial FDA approval in 2016. However, the drug has enjoyed strong demand -- which makes sense because there are no other approved therapies for DMD, a rare genetic disease that causes muscular weakness and primarily impacts young boys.

Sarepta did encounter a major setback for eteplirsen, with the European Committee for Medicinal Products for Human Use (CHMP) recommending against approval for the drug. The biotech plans to file for reexamination of eteplirsen, and it will request that a scientific advisory group made up of DMD and neuromuscular specialists be convened to dig into the merits of the clinical data for eteplirsen.

In the meantime, Sarepta is moving forward with other pipeline candidates. The company plans to complete a rolling submission by the end of 2018 for FDA accelerated approval of golodirsen in treating patients with DMD amenable to skipping exon 53. Sarepta also announced a partnership with Myonexus Therapeutics to develop gene therapies for various forms of Limb-girdle muscular dystrophies.

There's a lot of anticipated success baked into the share price for Sarepta. While the stock could move even higher, I wouldn't be surprised if Sarepta's momentum slows down.

All three of these stocks have at least one common denominator: They're all biotechs. Biotech stocks can generate huge returns. But they also have huge risks.

Any time the risks are lowered, biotech stock prices take off. That's what happened with Nektar, CRISPR Therapeutics, and Sarepta. All three of these stocks, though, still have plenty of risks. And if any of those risks appear to increase significantly, the stocks can go down just as quickly as they went up.