Please ensure Javascript is enabled for purposes of website accessibility
Log In Help Join The Motley Fool
Free Article Join Over 1 Million Premium Members And Get More In-Depth Stock Guidance and Research
By Dan Caplinger – May 15, 2018 at 4:31PM

Find out which of these stocks benefited from good earnings.

The stock market finally hit some resistance on Tuesday, giving up ground and breaking a long streak of consecutive advances for most major benchmarks. Market participants got spooked by a rise in interest rates, with 10-year Treasury yields once again climbing above the 3% mark and leading some to predict even steeper advances in the future. With budget deficits ballooning, higher interest expenses on the national debt could have a dramatic impact on the U.S. economy, especially if it lures investors away from high-flying stocks. Yet even amid the bond-driven downturn, some individual companies saw good news lift their shares. Valeant Pharmaceuticals International (BHC 2.03%), Hollysys Automation Technologies (HOLI 1.17%), and Ascena Retail Group (ASNA) were among the best performers on the day. Here's why they did so well.

Valeant gets a good review

Shares of Valeant Pharmaceuticals International almost 4% after the drug company received favorable comments from analysts. Mizuho Securities raised its rating on Valeant from neutral to buy, pushing its price target higher by 80% to $27 per share. The pharma stock saw one of the most dramatic plunges in the industry in recent years, triggered by scandals about its business model, but Valeant has worked hard to reposition itself strategically to emphasize its highest-growth treatment prospects while restoring its reputation. Valeant still has a long way to go, but positive analysis from Wall Street is a sign that the drugmaker is making progress. 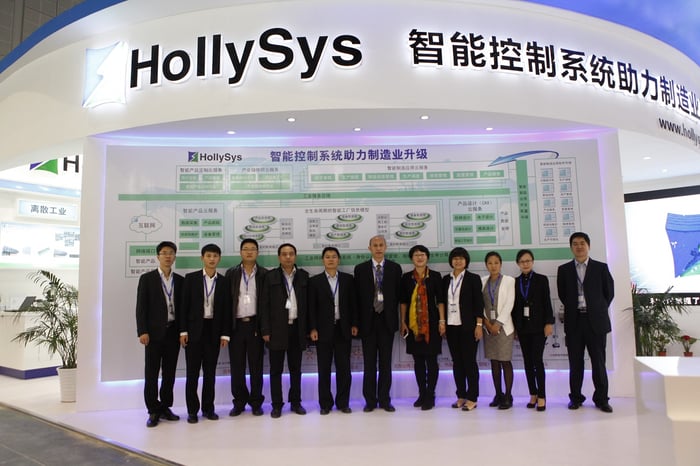 Hollysys Automation Technologies stock jumped 13% in the wake of the company's fiscal third-quarter financial report. The China-based maker of railway and industrial automation equipment and systems said that revenue jumped by a third from year-ago levels, lifting adjusted net income by nearly 70%. Hollysys has had good success in signing major contracts with a broad range of customers, with an especially strong emphasis in recent months on the energy industry. As it follows through on efforts to expand beyond China to areas like Southeast Asia and the Middle East, Hollysys finally looks like it's starting to mount the turnaround that some investors have waited years to see.

Finally, shares of Ascena Retail Group gained 10%. The company behind retail chains including Ann Taylor and Lane Bryant bounced back from recent weakness today, as investors reassessed whether hard-hit retailers have finally shown signs of hitting bottom. Ascena has worked to try to build a greater presence in the e-commerce world, and although it had a downbeat holiday quarter to end 2017, success in areas like its Justice teen-retail concept show the potential for longer-term success. Ascena still carries substantial risk, but if improvements continue into the key spring shopping season, then they could bring further share-price gains with them.