When billionaire investor Warren Buffett buys, people take notice. When one of those investments ups its dividend by 14%, they take further notice. Those are two reasons why Phillips 66 (NYSE:PSX) has been getting a lot of attention lately.

Through Berkshire Hathaway (NYSE:BRK.A)(NYSE:BRK.B), Buffett owns 45.7 million shares of Phillips 66, or 9.8% of the company, which he has called "a great company with a diversified downstream portfolio and a strong management team." But Berkshire bought the stock years ago when the purchase price was significantly lower than it is today. Is it still worth buying at these prices? Let's dig into Phillips 66 to see whether shares are still worth it for investors. 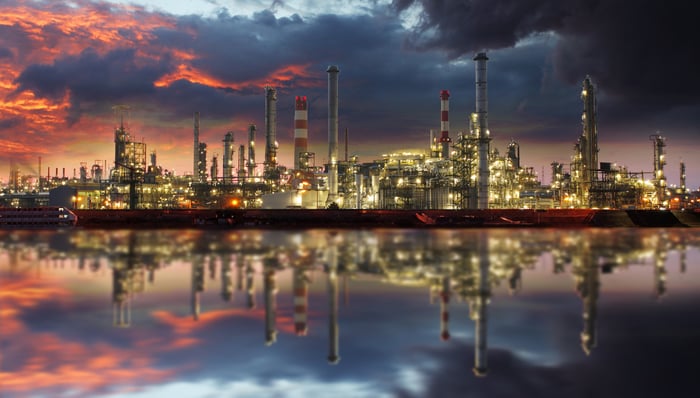 Phillips 66's stock has trended higher since Buffett bought. Is it too late for the rest of us? Image source: Getty Images.

Phillips 66 was the midstream (transportation and storage) and downstream (refining and marketing) arms of oil and gas giant ConocoPhillips, which spun the company off in 2012. The company's midstream operations include income from its master limited partnerships Phillips 66 Partners (NYSE:PSXP) and DCP Midstream (NYSE:DCP), which it co-owns with Enbridge.

The company has numerous business units. How well each performs depends a lot on what's happening in the energy markets. Usually, Phillips 66's refining arm is the most lucrative, but in 2016, it was the company's marketing unit, and in the most recently completed Q1 2018, it was midstream by a nose over chemicals. Suffice it to say that Phillips 66 has a very diversified business model that should be able to absorb temporary weakness in any one part of the portfolio, like in Q1 when adjusted net income from refining dropped by 75.1% sequentially, but the company's overall earnings still beat analysts' expectations.

With oil prices now above $70/barrel -- and Brent crude prices are even creeping up on $75/barrel -- oil production has become more lucrative. That doesn't directly affect Phillips 66, which isn't an oil producer, but it does increase demand for its midstream services as higher oil production volumes require more transportation and storage.

Phillips 66 Partners has been capitalizing on this trend in Q1, reporting higher volumes in its joint ventures, as well as beating consensus expectations for revenue and earnings. In Q4 2017, the partnership increased earnings by 60%, thanks to the completion of its largest acquisition to date, and in Q1 it announced the Gray Oak Pipeline project, its largest organic growth project to date, which will expand the company's footprint in the red-hot Permian Basin.

As for the parent company, refining income was much lower in Q1 due to several refinery turnarounds -- when a refinery is taken completely offline for major revamping. But even with those turnarounds occurring, Phillips 66 still managed to generate $488 million in operating cash flow and return $3.8 billion to shareholders through dividends and share repurchases. Now that those turnarounds are in the rearview mirror, the company should benefit directly from the increased refinery capacity and throughput, and indirectly through the extra volumes it can move through its pipelines to its refineries.

Buffett's Phillips 66 investment is paying off handsomely: in 2016, Berkshire reported an average purchase price for its shares in the high $70s. With the stock now trading in the low $110s, that's more than a 40% current return. But it also may mean the stock isn't as big of a bargain now as it was then.

One thing that's less attractive is the company's dividend, which spent much of 2017 above 3%. Thanks to recent share price appreciation, though. that dividend has shrunk to just 2.5% today. That's not a bad thing for existing shareholders, but it's cold comfort for those looking to buy in now.

However, the company's valuation metrics paint a mixed picture of its valuation compared to its peers:

While Phillips 66's P/E metrics are in line with these three peer companies, its EV-to-EBITDA ratio, which strips out depreciation, is higher than these three peers on both a trailing and forward basis, suggesting that it might not be that much of a bargain by comparison.

Unfortunately, there's no real way to determine which metric is correct except to wait and see.

Warren Buffett likes to buy wonderful companies at great prices, and he certainly seems to have gotten his money's worth with Phillips 66. But it's possible that the value ship may have sailed on this investment. While it seems likely that the company's midstream segment will continue to outperform in the short term as long as oil prices stay high, sustained high oil prices may cause problems for the company's refining segment. While the company has a fair shot at medium-term outperformance as its various projects come online, the energy markets may not cooperate, so it's not a slam dunk investment anymore.

That said, I wouldn't go so far as to call it a bad investment; investors will probably be just fine if they buy in now. But as with much of the oil and gas space at present, the real bargains are getting tougher and tougher to find as energy prices rise ever higher.