Please ensure Javascript is enabled for purposes of website accessibility
Log In Help Join The Motley Fool
Free Article Join Over 1 Million Premium Members And Get More In-Depth Stock Guidance and Research
By Billy Duberstein – Updated May 17, 2018 at 8:47AM

JD is pursuing a proven e-commerce strategy, so why isn't the company getting any love?

The Chinese e-commerce wars are heating up, with leading companies racing to win over the hearts and minds of the country's consumers. Since the prize will be big -- the Chinese middle class is projected to reach 600 million by 2021, roughly twice the U.S. population -- the stakes are as well.

The two main Chinese e-commerce players are JD.com (JD -2.17%) and Alibaba (BABA -2.37%). Both companies reported earnings recently, with the Mr. Market cheering Alibaba, but giving the thumbs-down to JD.

I think JD may be being short-changed. Its business model is different from Alibaba's -- JD.com began as its its own end-to-end logistics platform, through which it sells its own inventory, whereas Alibaba began as a high-margin two-sided platform connecting buyers and sellers, making money from fees and advertising.

Recently, however, each company has been encroaching on the business model of the other, with Alibaba taking control of its logistics joint venture Cainiao in 2017 (which has lowered margins), and JD continuing to build out its network while also growing advertising revenue and increasing its third-party fulfillment services for outside businesses.

While the market didn't seem to like seeing JD Mall's operating margins shrink from 2.2% to 2.1% last quarter, I think investors are missing the point. JD is reinvesting all excess profits into staying ahead of Alibaba in logistics infrastructure, and these investments are masking three large potential profit drivers. 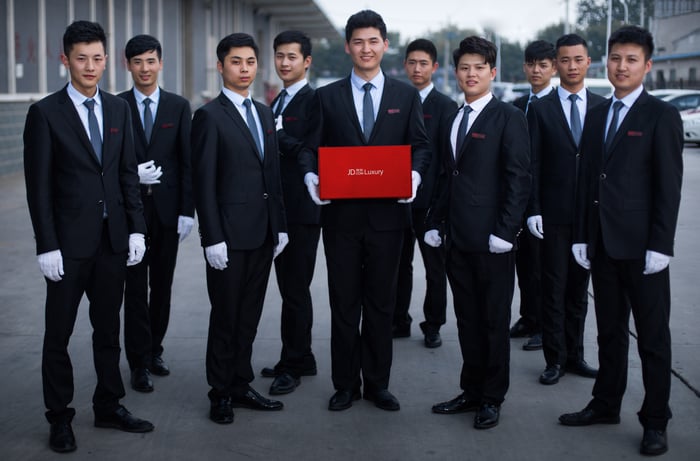 Are there profits hidden in that JD box? Image source: JD.com.

JD.com has a lower e-commerce market share than Alibaba, but in terms of its logistics network, it appears to be ahead. After spending heavily on warehouses in the fourth quarter of 2017, JD added another 29 last quarter, bringing its total to 515 across China, encompassing 10.9 million square meters.

Alibaba is coming at logistics from a different direction, through the late 2017 acquisition of Cainiao. Unlike JD's owned end-to-end network, Cainiao is a technology platform that connects thousands of small logistics companies to shippers on a common platform. It's unclear how much warehouse space Alibaba controls through Cainiao's network, but in an investor presentation one year ago, Alibaba noted Cainiao had only four million square meters. That number is likely much higher now, but still likely behind JD's fully controlled network.

Warehouses that are underutilized are less profitable than fully utilized warehouses, and according to JD management, it built out lots of extra capacity late last year, which will take a few quarters to become fully "digested." In addition, JD is using more and more of its logistics network for third-party fulfillment, which is higher-margin than selling its own inventory. JD doesn't break out third party vs. first party revenue, but did reveal third-party revenues were growing, "triple digit," and that it expects more than 50% of its gross merchandise volume to be third-party within five years.

The combination of greater warehouse utilization and more third-party sales should help expand JD's margins in the future.

Apparel, where art thou?

JD has also been suffering from some lost revenue in its apparel segment, but that is also likely to be temporary. That reduction was likely due to reported strong-arm tactics from Alibaba, which began to demand exclusivity from certain apparel brands and vendors last year. The issue was reported last fall and then again this spring.

The unfortunate turn of events impacted JD's first quarter revenue and earnings, but CFO Sidney Huang claimed some brands were beginning to return, and was confident that eventually all brands would come back, given JD's growing scale and customer base.

While there's currently uncertainty around this issue, I agree with Huang and think the issue will eventually be resolved. Keep in mind, JD was still able to grow 44% this past quarter without any expansion in the apparel category, and this headwind may very well turn into a growth tailwind in the future.

One final hidden profit center for JD.com is its advertising. Like many internet platforms, JD is anticipating it will be able to improve its ad targeting through the use of big data. According to Huang, while JD sells one-quarter to one-third of the gross merchandise volume of Alibaba, it only earns one-tenth of the advertising revenue. That seems to indicate that JD has room to grow this category without overburdening customers with excessive or intrusive ad loads.

Mr. Market couldn't see the profit potential in JD's earnings report, but that doesn't mean it doesn't exist. For those looking for Chinese investments, I think JD might just be a hidden gem.