Only three drugs based on marijuana have ever been approved by the U.S. Food and Drug Administration (FDA). None of those drugs were actually made from marijuana plants, but were instead created using synthetic versions of cannabinoids. None of them have been huge commercial successes, either. But a cannabinoid drug that's actually made from marijuana plants and has blockbuster sales potential could soon win approval.

The FDA is scheduled to make a decision by June 27, 2018, on GW Pharmaceuticals' (NASDAQ:GWPH) cannabidiol (CBD) drug Epidiolex as a treatment for Dravet syndrome and Lennox-Gastaut syndrome (LGS). An FDA advisory committee already unanimously recommended approval for the cannabinoid drug.

Epidiolex is widely expected to be a big seller. Market research firm Evaluate Pharma projects that it will be one of the 10 biggest new drugs launched in 2018, with sales around $1 billion by 2022.

With the countdown on for the anticipated approval and commercial launch of Epidiolex, GW Pharmaceuticals executives fielded questions on Wednesday at the Bank of America Merrill Lynch 2018 Health Care Conference. Here are five things you'll want to know about what could be the biggest medical marijuana drug ever. 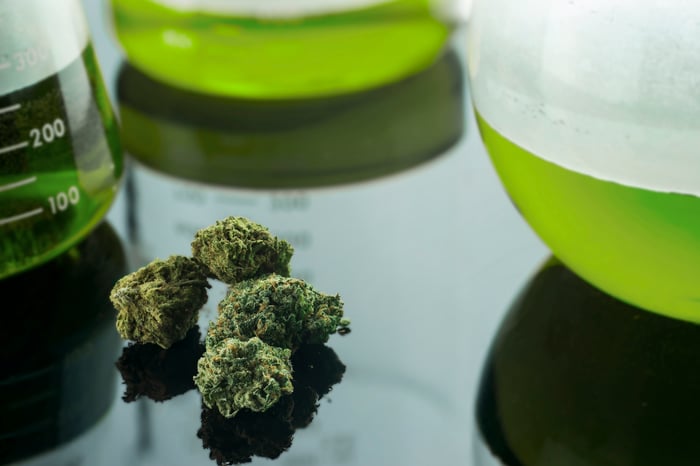 1. When could Epidiolex be available to patients?

There's no guarantee that the FDA will approve Epidiolex. The agency doesn't have to go along with the recommendation of the advisory committee. But the odds of approval appear to be really good. In most cases, the FDA does approve a drug when it's been recommended by an advisory committee.

While an approval decision should be made within the next month or so, GW Pharmaceuticals CEO Justin Gover said that Epidiolex won't be launched in the U.S. until early fall. That's because the drug must be scheduled by the Drug Enforcement Administration (DEA) after it's approved by the FDA. This process can take up to 90 days.

2. What are payers saying?

FDA approval and DEA scheduling are just the first hurdles for GW Pharmaceuticals. The company must also secure payer coverage for Epidiolex. Julian Gangolli, president of GW's North American operations, said that there has been "a lot of discussion with payers going back to 2017."

He noted that the three well-controlled phase 3 clinical studies supporting Epidiolex are different than what payers are accustomed to in the orphan drug market. (Orphan drugs treat diseases that affect fewer than 200,000 people in the U.S., or that affect more than 200,000 persons but aren't expected to recover the costs of developing and marketing the drug.) Other orphan drug studies are usually smaller and "not quite as well controlled" as the ones that GW conducted, according to Gangolli.

3. Will GW be able to keep up with demand?

There aren't any FDA-approved treatments for Dravet syndrome. And while there are approved drugs for treating LGS, many patients develop resistance to these drugs. Epidiolex could enjoy strong demand right out of the gate if it's approved, especially if physicians also prescribe the drug for other types of epilepsy that aren't on the product label.

Justin Gover was clear about GW Pharmaceuticals' intention to promote Epidiolex only for the two approved indications. However, he added that the company "is mindful of the level of unmet need." Gover said that GW should be in good shape to meet projected demand for the first two years with its current production facilities, which have already been inspected by the FDA. After the second year following anticipated approval, the company will have added capacity.

4. How much will patients have to pay out of pocket?

GW Pharmaceuticals hasn't announced the pricing for Epidiolex. However, Gangolli noted the price tags for two current LGS drugs on the market. Onfi costs roughly $21,000 to $22,000 per year on a weighted average basis, while Banzel costs around $32,000 per year. It seems likely that GW will price Epidiolex competitively with these two other products.

What about how much patients will have to pay out of pocket? That depends on the type of coverage. Gangolli stated that around 55% of Epidiolex patients would likely be on Medicaid or Medicare. These patients usually have drug copays between $5 and $10. Gangolli acknowledged that Medicaid and Medicare copays can sometimes be more, but that they should "be affordable."

As for the patients on private insurance, the out-of-pocket costs will be specific to each plan. Gangolli mentioned, though, that copays for Banzel and Onfi could be as high as the $180-$200 range, but that many were between $50 and $80.

5. Could many patients choose medical marijuana instead of Epidiolex?

Is it possible that medical marijuana could be more popular with patients than Epidiolex? Justin Gover's immediate response was that "first and foremost, this [epilepsy] is not a trivial disease" and that patients "should be under appropriate medical care."

Perhaps the most important reason why Epidiolex shouldn't be threatened by medical marijuana too much, though, is the financial consideration. Gover noted that non-FDA-approved CBD oils aren't cheap. He also stressed that the "therapeutic dosage required is pretty sizable." The costs to patients to try to replicate the dosage of Epidiolex with other CBD oils would be very high.

At the same time, GW Pharmaceuticals fully expects to secure payer coverage for Epidiolex. Patients would only need to pay copays for the drug, which would make it much more cost-effective than buying CBD products that insurers don't cover.

GW Pharmaceuticals stock will likely enjoy a boost if the FDA approves Epidiolex as expected. The key thing to watch immediately following this anticipated approval is the DEA classification of the drug. Should Epidiolex win a less restrictive classification than schedule IV, GW would probably have another positive catalyst.

The most important thing for investors, though, is how well the expected commercial launch of Epidiolex goes. GW Pharmaceuticals appears to be in good position to quickly hire and train a sales team. The big question will be how favorably payers view Epidiolex. Their reactions will have a significant impact on Epidiolex sales -- and on GW Pharmaceuticals stock.