Please ensure Javascript is enabled for purposes of website accessibility
Log In Help Join The Motley Fool
Free Article Join Over 1 Million Premium Members And Get More In-Depth Stock Guidance and Research
By Richard Robinson - May 17, 2018 at 11:44AM

Brexit fears have crushed this bank's stock price. Here's why now could be the best time to buy.

In 2016, the United Kingdom voted to leave the European Union. And while the UK won't officially leave the EU until 2019, the decision has had a negative effect on UK stock prices.

That's because most analysts expected Brexit to cripple the UK economy. But the fears proved unfounded as the UK economy grew nearly 2% annually since the vote. But, UK stock prices have barely moved -- giving investors an opportunity to buy UK businesses on the cheap. One such company is Lloyds Banking Group (LYG 0.24%) (LLOY 0.30%), an American Depository Receipt, or ADR, that trades in US markets in US dollars. 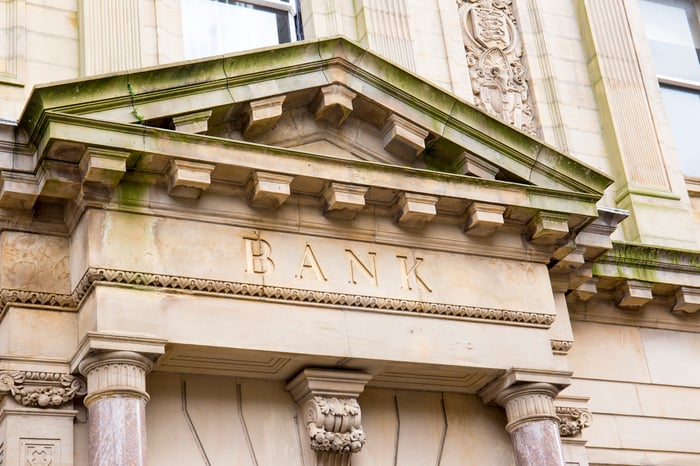 Lloyds showed strength in 2017, growing its net interest income by 8% to $16.7 billion. The company added another $8.4 billion from its insurance and wealth management divisions. The company's net interest margin for 2017 was 286 basis points.

The company's before tax profit grew 24% to nearly $7.2 billion. On an after-tax basis, the company's $4.8 billion profit was a 41% increase over the prior year. Perhaps the most important metric for Lloyds is the bank's efficiency ratio, which measures the company's expenses against its revenues. Incredibly, Lloyds shines with a 46.8% efficiency ratio. This compares to average ratios of US Banks of roughly 60%.

And lest you think these results were a one-off, Lloyds continues to outperform. In 1Q2018, the bank posted a 23% increase in operating profits to $2.2 billion. On an after-tax basis, profits rose 29% to $1.36 billion. The statutory return on tangible equity, or RoTE, was 12.3%. This metric measures the return on tangible common shareholder equity and analysts look for numbers greater than 10%.

Lloyds reported its net interest margin expanded to 293 basis points in the first quarter of the year. But the Bank of England is following the Federal Reserve in raising interest rates, so this number will continue to widen going forward. And given the company operates a low-risk business model of generating most of its income from interest, instead of riskier investment banking and trading desk activities, the bank should see its margins increase steadily.

Lloyds' assets remain solid, too. Asset quality increased by 3 basis points in 2017 -- indicating declining delinquencies for the bank. The company also reported that the number of loans with a loan-to-value index of greater than 80% fell to $41.6 billion. This means the bank is less susceptible to large asset write-downs should another serious recession hit the country.

Of course, the company's best in class efficiency ratio in the mid-40s will drive profitability in the future. The company should see its annual earnings growth rate climb by nearly 8% annually for the next three years.

Lloyds stock trades at an attractive valuation. The stock trades at a forward price-to-earnings ratio of 9.4. But keep in mind, P/E ratios aren't the best metric to use in identifying undervalued financial companies. This is because banks experience cyclical earnings due to fluctuations in interest rates. This distorts P/E values and makes them less reliable indicators of value..
On the other hand, the price-to-book metric compares a bank's market value to its book value -- or the value of the bank's assets on its balance sheet. A P/B ratio less than 1 indicates the stock trades at a price less than value of its assets. And it's a good indication that a stock is undervalued.

Given the quality of Lloyd's earnings and assets, there is no reason for the stock to be trading at a discount to other UK banks. Using the UK average P/B ratio of 1.3, Lloyd's is valued at $4.73 per share -- or 30% higher than today's price.

Interestingly, a Graham number confirms the discount calculated above. This metric measures fundamental value by examining a company's earnings and book value on a per share basis.  According to Ben Graham, any stock trading below the Graham number is undervalued.  And that's exactly what we find with Lloyds. A fair market value of $4.70 is calculated for LYG -- a 34% premium to its current price.

Lloyds is by far the cheapest major economy bank sporting their level of return on tangible equity. And with no reason to assume the company is unable to sustain this level of performance, LYG is an attractive buy in this market. Furthermore, given the stock trades at a discount to its book value, the stock has a built-in margin of safety in the unlikely event that Brexit fears come to fruition.

What Price Will Lloyds Banking and Royal Bank of Scotland Be Sold for?

Lloyds Banking Shows It's Back on the Right Track