Please ensure Javascript is enabled for purposes of website accessibility
Log In Help Join The Motley Fool
Free Article Join Over 1 Million Premium Members And Get More In-Depth Stock Guidance and Research
By Evan Niu, CFA - May 18, 2018 at 3:56PM

Apple (AAPL 1.62%) officially jumped into the smart speaker market in the first quarter with the HomePod, and analysts believe that sales thus far are "underwhelming." Siri remains less capable than its competing counterparts, HomePod only supports Apple Music for full functionality, and the $350 price tag positions it at a significant premium. With HomePod being included in the company's catch-all "Other Products" segment, investors aren't likely to get much official data from Apple anytime soon.

That's where third-party estimates come in. 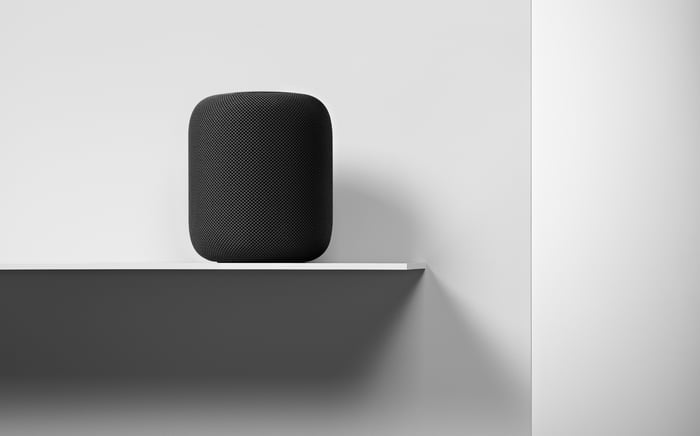 Market researcher Strategy Analytics is out with its estimates on the smart speaker market for the first quarter, estimating that Apple shipped approximately 600,000 units after HomePod launched in February. Amazon.com (AMZN 3.15%) is maintaining its strong grip on the market, although its share did drop quite a bit. But the overall market is simply growing so quickly that the e-commerce giant still doubled unit shipments of Echo devices. Alphabet (GOOG -0.27%) (GOOGL -0.21%) subsidiary Google continues to make headway as well.

The Chinese market for smart speakers continues to grow, with local vendors like Alibaba and Xiaomi (which is preparing to go public soon) stepping up to meet the demand, according to Strategy Analytics. Amazon, Google, and Apple do not currently ship smart speakers into the Middle Kingdom. On the earnings call earlier this month, CEO Tim Cook noted that HomePod is only available in the U.S., U.K., and Australia right now, with availability in more markets coming soon.

While Apple generally does not place much value in unit share, it's clear that Amazon and Google are enjoying unit growth thanks to broader portfolios of devices offered at lower price points. That's why the "HomePod Mini" that Apple is rumored to have in the pipeline has a lot of potential, as it would make the idea of buying multiple devices a more tenable proposition for consumers.

Of course, HomePod was only available for about half of the quarter, so its performance isn't all that representative quite yet. Let's see how the Mac maker fares in the quarters ahead.