Please ensure Javascript is enabled for purposes of website accessibility
Log In Help Join The Motley Fool
Free Article Join Over 1 Million Premium Members And Get More In-Depth Stock Guidance and Research
By Adam Levine-Weinberg - May 20, 2018 at 10:18AM

Lowe's has started carrying a collection of Craftsman tools and accessories, with more on the way. That's bad news for Sears Holdings, which still earns a tidy profit selling Craftsman products.

In early 2017, Sears Holdings (SHLDQ) sold the rights to its storied Craftsman tool brand to Stanley Black & Decker (SWK -1.61%). Stanley Black & Decker agreed to pay $525 million upfront -- plus supplemental payments with an estimated present value of at least $375 million -- for the right to manufacture and sell Craftsman-branded products outside of Sears Holdings-affiliated channels.

The upfront windfall helped Sears Holdings cover some of its 2017 cash burn. The supplemental payments will shore up its underfunded pension plan. But now, Sears must pay the piper.

On Monday, home improvement giant Lowe's (LOW -5.16%) began selling Craftsman tools and accessories made by Stanley Black & Decker. It probably won't take long for the availability of Craftsman products at Lowe's (and elsewhere) to start cannibalizing sales at Sears stores.

The Craftsman tools are in early this year

Lowe's announced last October that it would start carrying Craftsman tools. This was the first new distribution announcement made after Stanley Black & Decker closed the Craftsman deal. However, at the time, Lowe's stated that Craftsman products wouldn't start arriving in its stores and online until the second half of 2018.

Instead, Stanley Black & Decker managed to get some Craftsman products to its new retail partner by mid-May: months ahead of the original schedule. Lowe's is now selling a selection of Craftsman-branded tool sets, tool storage units, garage organizers, and other items. 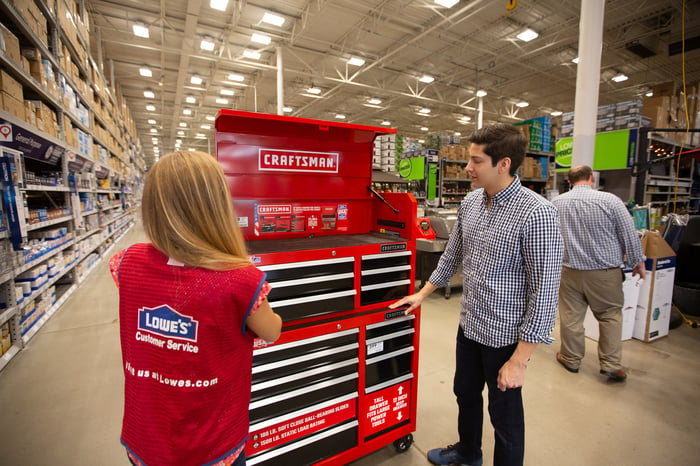 As Lowe's noted, the timing for this product launch is perfect, with the key Father's Day holiday coming up next month. Later in 2018, Lowe's will begin stocking its full Craftsman collection, which will include items like individual hand tools and power tools.

Another sales headwind for Sears

Tools are one of Sears Holdings' strongest product categories today (along with appliances). In fact, while Sears' revenue has been in a tailspin over the past few years, the company probably brought in at least $1 billion last year from selling Craftsman tools.

The growing availability of Craftsman products outside of Sears stores is bound to cannibalize tool sales at Sears, which is already struggling with weak store traffic. While Craftsman tools have been sold at the likes of Ace Hardware previously, Lowe's is a whole different animal, with roughly 10 times the annual revenue of the Ace Hardware chain.

At the time that it acquired the rights to the Craftsman brand, Stanley Black & Decker estimated that Craftsman would contribute about $100 million of revenue growth each year for 10 years. Stanley Black & Decker made this projection before Sears accelerated its rate of store closures, so it could potentially surpass that revenue growth target, at least in the near term.

This isn't a huge amount of sales for Sears to lose, in the grand scheme of things. After all, Sears Holdings' revenue plunged by more than $5 billion last year. But it will still hurt, because the Craftsman tool business is undoubtedly one of Sears' most profitable business lines, due to the continuing power of the brand.

How much more can Sears withstand?

For the past several years, Sears Holdings has been burning an average of nearly $2 billion of cash annually. A special committee of the board is investigating more asset sales in an effort to improve the company's balance sheet. This news and other recent strategic moves have caused Sears Holdings stock to rally this month.

That said, any recovery in the stock is predicated on the idea that Sears Holdings will eventually be able to stem its sales declines and cash burn. In fact, given that Sears is running out of assets to sell, the company probably needs to reach breakeven within two or three years to survive.

Expanded distribution of Craftsman tools made by Stanley Black & Decker will make it harder than ever for Sears Holdings to reach breakeven. While the Craftsman sale bought the company some time, that's all it did. Sears Holdings is still likely to collapse within the next year or two.