Please ensure Javascript is enabled for purposes of website accessibility
Log In Help Join The Motley Fool
Free Article Join Over 1 Million Premium Members And Get More In-Depth Stock Guidance and Research
By Matthew Frankel, CFP® - May 20, 2018 at 6:26AM

The average college savings has risen significantly over the past couple years.

About two-thirds of American parents are either saving for college or making a plan to pay for college, according to Sallie Mae's How America Saves for College 2018 study. And among those parents who are saving for college, the average amount they have saved is up significantly from the last time the study was conducted.

Here's a rundown of how American's college savings have changed since 2016, some key reasons for the increase, and what types of accounts Americans are using to save. 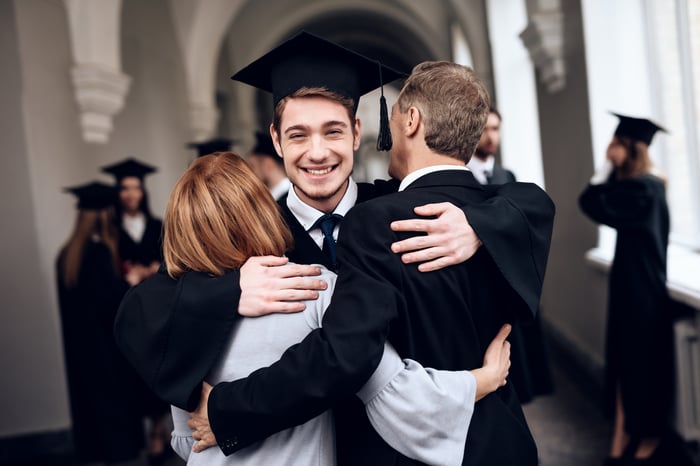 Here's the short answer: Among the American parents who are saving for college, the average amount saved is $18,135. This is 11% higher than the previous version of the study, which was released in 2016. This is only about one-third of the average American's goal, but impressively, nearly 9 out of 10 parents are confident they'll reach their college savings goal.

Why has the average college savings increased?

One big driver of higher college savings balances could be simply because of strong investment performance. As we'll see in the next section, approximately half of college savings are kept in investment-based accounts, so when the stock market does well, these accounts get more valuable.

The 2018 study was conducted in January and February of this year, while the 2016 version of the study was conducted in May and June 2016. Of course, it's difficult to pinpoint the exact market performance because the studies were both conducted over extended time periods, but between June 1, 2016 and Feb. 1, 2018, the S&P 500's total return was 39%. While only about half of college savings are in investment accounts, and it's fair to assume that not all of this is invested in stocks, that's a big upward move that's likely responsible for at least part of the higher average.

Another reason is that many people are choosing to save more. In fact, 31% of respondents said they were saving more, while just 8% say they are saving less than before.

Of the parents saving more, the top reason (given by 39% of those saving more) is that their household income increased, while other common reasons include because their child is getting closer to college age, they realized they hadn't been saving enough, the parents learned more about how much college costs, and having reduced their other expenses.

How are Americans saving for college?

Only 40% of college savings in America are contained in college-specific savings accounts, including 529 savings plan accounts, prepaid tuition plans offered by certain states, and Coverdell ESAs. Other common places people save for college are in a standard bank account or investment account. Here's the full breakdown:

More parents want their kids to have skin in the game

As a final point, one of the more interesting findings is that more parents think their kids should help pay for college in 2018 than in the 2016 edition of the study. This may seem odd, given that so many people are saving more for college than before and the average savings has increased by 11%.

However, the study found that 59% of parents think that their children should share the burden of college costs, up significantly from 51% in the 2016 study. This could explain why the average savings goal has dropped from $61,902 in 2016 to $55,342 now.