Please ensure Javascript is enabled for purposes of website accessibility
Log In Help Join The Motley Fool
Free Article Join Over 1 Million Premium Members And Get More In-Depth Stock Guidance and Research
By Adam Levine-Weinberg - May 20, 2018 at 1:55PM

JetBlue has big growth plans in Orlando. Will this put it in conflict with market leader Southwest Airlines?

Investors -- not to mention the traveling public -- just got a sneak peek at some of JetBlue Airways' (JBLU -4.86%) plans for future growth. In approving an expansion to an ongoing terminal project, the Greater Orlando Aviation Authority revealed that JetBlue plans to offer more than 100 daily departures from Orlando in the coming years.

This represents a third leg to JetBlue's medium-term growth plan that hadn't been announced before. JetBlue will take on market leader Southwest Airlines (LUV -2.33%) as it looks to expand in its fourth-largest focus city.

A third focus city for growth

In recent years, JetBlue Airways has leaned heavily on two of its six focus cities to drive most of its growth. In Boston, where JetBlue is the No. 1 airline, the carrier is looking to reach 200 daily departures within the next few years. In Fort Lauderdale, JetBlue has surpassed its previous goal of 100 daily departures and now aims to operate 140 daily departures in the not-too-distant future.

Meanwhile, tough market conditions have forced JetBlue to retrench in its two smallest focus cities: San Juan and Long Beach, California. And while the carrier is doing its best to add capacity in New York, slot constraints at JFK Airport and LaGuardia Airport impose sharp limits on JetBlue's ability to grow there. 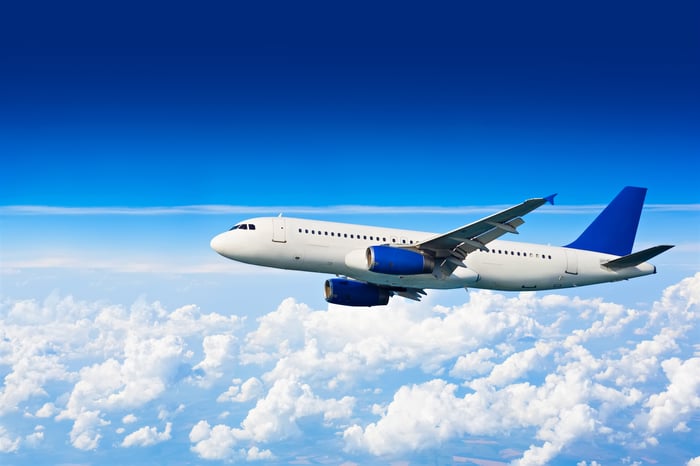 Most of JetBlue's recent growth has come in Boston and Fort Lauderdale. Image source: Getty Images.

However, Orlando -- JetBlue's sixth focus city -- holds significant growth potential, thanks to a strong local economy and a booming tourism industry. JetBlue plans to take advantage of this opportunity over the next several years.

JetBlue has a goal in Orlando

Last Wednesday, the Greater Orlando Aviation Authority announced an expansion to the scope of its South Terminal construction project. The first phase of this new terminal is scheduled to open in 2021. It will have 19 gates at that time rather than the originally planned 16 gates, with JetBlue getting preferential use of 14 of them.

This will allow JetBlue to expand its footprint in Orlando to at least 100 daily departures. (The airport authority was the first to reveal this target, but the airline has since confirmed it.) For comparison, JetBlue currently operates about 70 daily departures from Orlando to more than two dozen cities, although it tends to offer a greater number of flights during the winter season.

Last year, Southwest Airlines was the clear No. 1 airline in Orlando, with 25% market share. It currently operates more than 130 daily departures there. Delta took the No. 2 spot last year with 14% of the market, while JetBlue was right behind with a 13% share.

JetBlue's growth plan will make it the clear No. 2 airline in Orlando. However, it still will be a good deal smaller there than Southwest Airlines.

Will JetBlue attack Southwest Airlines on its own turf?

Today, JetBlue and Southwest coexist very nicely in Orlando. JetBlue primarily flies to the Northeast (its traditional base of operations) and the Caribbean (where it's the largest carrier). By contrast, Southwest Airlines operates a lot of flights to the middle of the country, although it also does some East Coast flying and even a handful of cross-country flights from Orlando.

One possibility is that JetBlue will stay within its comfort zone as it grows in Orlando, primarily adding new routes and additional frequencies to airports in the Northeast and the Caribbean. Southwest Airlines has ambitious international growth plans of its own, so it might be wise for JetBlue to pre-empt its rival by adding more flights to the Caribbean (and perhaps parts of Latin America) in the next few years.

However, JetBlue also could opt to challenge Southwest head-on with flights to the Midwest, the South, or other regions that it mostly ignores today. While this is a less probable outcome, it's not out of the question. Indeed, JetBlue's most recent new route in Orlando was a daily flight to Atlanta -- a stronghold for Delta and Southwest where JetBlue didn't have any flights until 2017.

Now that we know JetBlue has big growth plans in Orlando, it will be interesting to see where it directs that growth. This could provide a lot of clues about JetBlue's long-term network strategy.