Please ensure Javascript is enabled for purposes of website accessibility
Log In Help Join The Motley Fool
Free Article Join Over 1 Million Premium Members And Get More In-Depth Stock Guidance and Research
By Rich Duprey – Updated May 21, 2018 at 4:33PM

Pairing the auto centers with the e-commerce site does more for Amazon than Sears.

Sears Holdings' (SHLDQ) latest partnership with Amazon.com (AMZN 4.50%) is the kind of smart, strategic thinking that could have saved the retailer had it been implemented five or 10 years ago. But today, it simply serves as a reminder of what could have been.

Sears recently announced that it will serve as the official installer for tires purchased on the e-commerce site, which Sears said was a first for a brick-and-mortar retailer. After making a tire purchase -- which includes Sears' DieHard tires, which it began selling two years ago -- customers can select an appointment time to have the tires installed and balanced. A Sears Auto Center representative will then contact the customer to confirm the appointment. 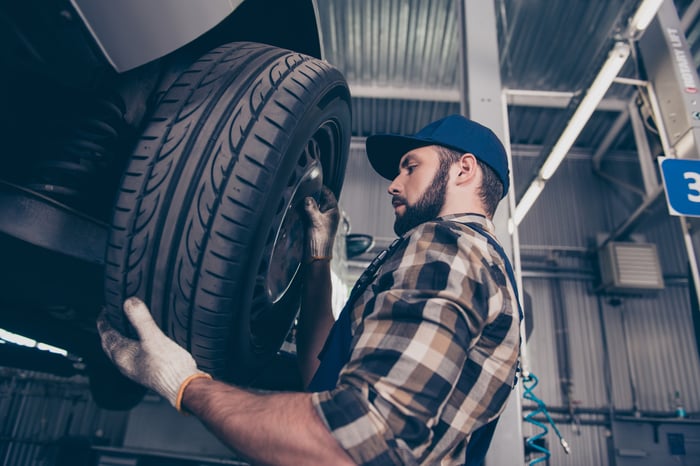 It's another smart deal that Chairman and CEO Eddie Lampert has made. Along with selling Kenmore appliances and DieHard products on Amazon, Lampert has arranged for the brands to be sold at different retailers around the world and to extend the brands to new products like gas grills and flashlights, respectively. He even rebranded at least one auto center under the DieHard brand.

Unfortunately, most of these flashes of brilliance have been for naught as sales continue to spiral down out of control. Same-store sales at Sears plunged 18.1% in the fourth quarter and were down an equally dismal 12.2% at Kmart. Now that the retailer seems to be careening toward a bankruptcy filing, none of these deals, including the latest, can stop it.

Amazon.com is the one who benefits the most here. Selling tires online is a tough business if you have nowhere to install them. By partnering with Sears Auto Center, one of the few remaining prized assets left at the retailer, Amazon is able to further bridge the gap between itself and its customers through brick-and-mortar stores, and it doesn't have to build any physical locations.

The service will initially be available at 47 Sears Auto Centers in eight of the top U.S. metropolitan areas, but will eventually be expanded to all 400 or so centers across the country.

There's little downside for Amazon here. It gets a national tire installer without the hassle of dealing with independent installers and it gets to see whether there is an online market for automotive installation services that it can potentially expand. Lampert is still interested in offloading the auto centers to generate cash and Amazon could be using the opportunity to gauge interest in enhancing its physical store strategy.

Sears gets to delay the inevitable

One can only surmise from the reaction to the news that investors are hoping this means Amazon might one day buy Sears, not just its automotive business. Why else would Sears stock soar more than 20% of the news? But that is a misplaced hope.

Amazon has lots of relationships with brick-and-mortar retailers. Beyond having major brand storefronts on Amazon's site, the e-commerce giant sells its Alexa-powered AI products in Kohl's and customers can process their returns there as well. It also has its Lockers in malls, on college campuses, and in 7-Eleven stores across the country. This is simply paving another avenue of access to its customers.

And it must be noted these are Amazon customers, not Sears customers. While Sears does get some remuneration out of the deal because it charges around $17 per tire for an installation, plus the potential for some ancillary sales from customers hanging out waiting for their tires to be put on, it's Amazon that is making the sale and generating the bulk of the revenue.

Moreover, buying tires online and having them shipped to the retailer still isn't as convenient as going into a local tire service center and purchasing them.

The partnership isn't necessarily a bad one and it continues Lampert's string of smart deals over the past year or so. But Sears is too far gone to be saved. Had this thinking been in place when it could have made a difference, we'd be singing a different tune today, but Sears is a broken brand and cobbling together a bunch of small deals, no matter how strategic they might seem, can't change its direction.