Please ensure Javascript is enabled for purposes of website accessibility
Log In Help Join The Motley Fool
Free Article Join Over 1 Million Premium Members And Get More In-Depth Stock Guidance and Research
By Tyler Crowe, Leo Sun, and Brian Feroldi – May 22, 2018 at 9:34AM

Here are a few stocks that fit the mold of a baby boomer portfolio today.

If you're a baby boomer, that means you are either in or only a few years away from retirement. This age represents a unique time in your investment life, as you are likely going to start using your savings and investment portfolio as a source of income rather than building your nest egg. This change also means that you will need to reallocate your portfolio toward defending your wealth and generating an income stream from the principal.

So, we asked three of our investing contributors to highlight stocks that would be well suited for a baby boomer's portfolio. Here's a brief rundown as to why they picked HP (HPQ -1.40%), ResMed (RMD 0.38%), and American Tower (AMT -1.70%). 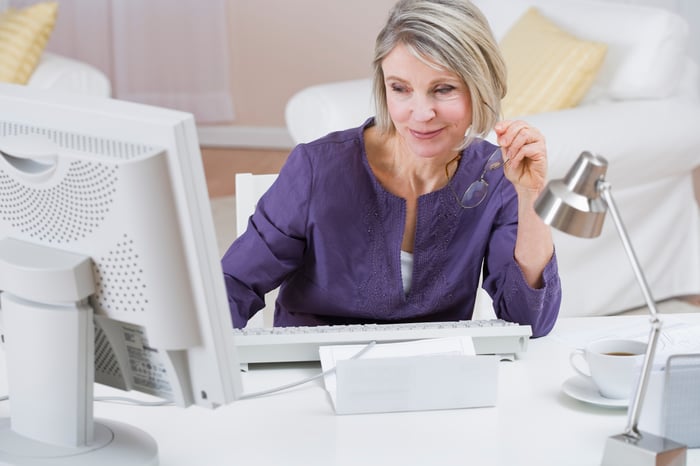 HP's PCs and printers might seem prone to disruption from smartphones, tablets, and paperless workplaces. Nonetheless, IDC reports that HP's global PC market share still rose from 20.9% to 22.7% between 2016 and 2017 -- making HP one of just three PC makers, alongside Dell and Apple, that posted annual growth. HP attributes that growth to robust demand for its high-end laptops and 2-in-1 devices.

HP's printing business also remains strong in the commercial and consumer markets. It scaled up that business by acquiring Samsung's printing unit in late 2017, and it's diversifying its portfolio with new mobile, 3D, and even 3D metal printers.

Analysts expect HP's sales to rise 9% and for its earnings to climb 19% this year. Yet HP's stock still trades at just 11 times this year's earnings and pays a forward dividend yield of 2.6%. That attractive combination of a rock-solid business, low valuations, and solid dividend make HP a great investment for aging investors.

Brian Feroldi (ResMed): About 25% of adults have sleep apnea, which is a condition that leads to repeated bursts of shallow (or stopped) breathing at night. Sleep apnea might sound harmless -- most people with the condition are unaware that they have it since they are sleeping when it is happening -- but it's actually a big problem. Years of untreated sleep apnea can greatly magnify the risk of developing a number of other comorbidities such as diabetes, stroke, or even a heart attack.

Medical device maker Resmed was founded nearly 30 years ago to help address this chronic problem. The company pioneered the first continuous positive airway pressure (CPAP) machine that stops sleep apnea from happening. This device keeps the patient's airway open all night long and enables them to get a good night sleep.

While Resmed has been hugely successful in its efforts to convince patients everywhere to adopt CPAP technology -- total sales grew 15% to $591 million last quarter -- the company still believes that the opportunity ahead is substantial. Only about 1 out of every 7 patients who suffer from sleep apnea in developed countries wears a CPAP machine at night. The adoption rate falls to about 1 in 100 patients in many emerging markets. These figures suggest that Resmed's revenue should continue to grow at a robust rate as more patients and providers warm up to the benefits of using a CPAP machine at night.

For investors, the steady top-line gains should translate into strong profit growth in the years ahead as operating leverage and share buybacks continue to work their magic. The company's dividend yield of 1.4% act as a nice bonus too.

In total, Resmed offers investors years of double-digit profit growth potential and an income stream that is poised for growth. That's a combination that should appeal to any investor.

An income investment to grow income over time

Tyler Crowe (American Tower): For baby boomers heading into retirement, a major focus will be to generate reliable income from their portfolio. Typically, that has meant stable high-yield stocks like utilities. While American Tower's dividend yield of 1.9% might not traditionally qualify as that high-yield dividend stock. The growth of the cell tower REIT and its payout give baby boomers income now with a lot of upside potential in the future.

Even though it has American in the name and the U.S. makes up about 65% of operating profit, only 25% of the company's cellphone towers and telecommunications sites are in the U.S. American Tower has been investing heavily in places where cellphone adoption and penetration of 3G and 4G data networks are much lower. The expectation is that these long-life assets will generate incredibly high rates of return for years as data consumption continues on its exponential growth track and requires more and more network infrastructure equipment on towers.

Looking at the financials, we're already seeing the impact of these trends. Revenue in its Latin America and EMEA (Europe, Middle East, and Africa) segments are growing at 15% or better each year, and management has been able to steadily grow its payout 20% annually over the past five years.

American Tower's business is pretty easy to understand, and it's not hard to see the potential out there for growing cellular and wireless data both in the U.S. and abroad. If you want a stock that has the potential to be an incredible income investment for baby boomers, then American Tower is a great place to start.