Please ensure Javascript is enabled for purposes of website accessibility
Log In Help Join The Motley Fool
Free Article Join Over 1 Million Premium Members And Get More In-Depth Stock Guidance and Research
By Brian Stoffel - Updated May 22, 2018 at 3:37PM

It's easy to forget what a miraculous ride it's been. Here's a quick refresher.

Before Oct. 23, 2001, Apple's (AAPL 2.14%) key products had been a mix of Mac computers and "other" service revenue. At the time, the company was valued at $6 billion -- roughly equivalent to where travel site TripAdvisor sits today.

But when the sun rose on Oct. 23, the company's trajectory -- in the eyes of both investors and consumers -- arguably changed forever. It was the day Steve Jobs debuted the iPod. While the device is largely obsolete today, the idea of having "1,000 songs in your pocket" was revolutionary at the time.

Today, Apple is the most valuable company in the world. A simple 9% run-up in the stock would make it the world's first trillion-dollar company. In honor of the remarkable 17-year run the stock has been on -- during which it delivered a 16,000% return -- here are the five stages that led to this momentous landmark.

The dawn of the iPod

When fiscal 2003 came to an end at Apple, the company was just beginning its renaissance after Steve Jobs' return to the helm. After repositioning Mac computers to be more functional in educational settings, Jobs had turned his attention to the music industry.

The biggest thing about iPod is that it holds 1,000 songs. This is a quantum leap, because for most people, this is their entire music library. This is huge. How many times have you gone on the road with a CD player and said, "Oh God, I didn't bring the CD I wanted to"? To have your whole music library with you at all times is a quantum leap in listening to music.

That's what Jobs said during the iPod's release. Judging by the sales iPod brought in over the next six years, he was right. 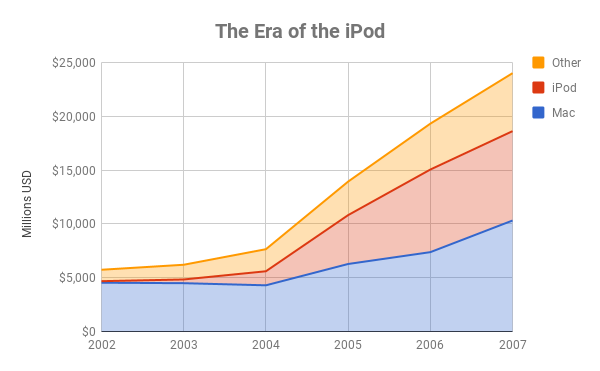 It's important to note, as well, that a huge portion of that "other" revenue the company brought in was via iTunes, which was popularized precisely because of the iPod. In total, the product went from accounting for 2.5% of revenue in 2002 to a whopping 40% of revenue in 2006.

Thanks to this newfound business, Apple's market cap increased from a mere $6 billion in 2001 to $100 billion by mid-2007. But that, it turns out, was just the beginning.

The era of the iPhone

For as much success as Apple had with the iPod, few could have imagined just how popular -- and dominant -- its next product would become. When Steve Jobs introduced the iPhone on June 29, 2007, he made it clear that this was a game-changer an order of magnitude bigger than anything the company had produced.

"Every once in a while, a revolutionary product comes along that changes everything ... Apple's been very fortunate to introduce a few of these into the world," Jobs said. Then, he teased us, saying Apple was introducing not one, but three new products: a wide-screen iPod, a phone, and an internet-connected device.

After a short while, he asked:

Are you getting it? These are not three separate devices. This is one device, and we are calling it: iPhone.

Folks camped out overnight to buy the first ones -- and based on sales, they weren't disappointed. 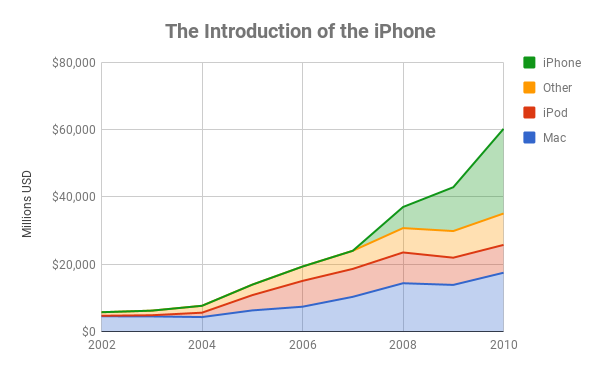 Apple succeeded in completely revolutionizing a smartphone industry that already had entrenched players. By 2010, the company's now-premier product brought in $25 billion in sales and accounted for over one-third of revenue.

There's no telling how much better results might have been had the Great Recession not landed smack-dab in the middle of the product's ramp up. But by the middle of 2010, Apple had grown all the way to a $250 billion company.

The economic recovery and introduction of the iPad

While Apple has introduced a number of new products since the iPhone, none have come close to matching the financial and cultural impact of the device. That said, some have moved the needle more than others.

When the iPad was eventually released in April 2010, many critics panned it as a useless device that would never catch on with consumers. That couldn't have been more false, as they started selling like hotcakes almost immediately. Combined with the continued strength of global iPhone sales coming out of the recession, revenue mushroomed. 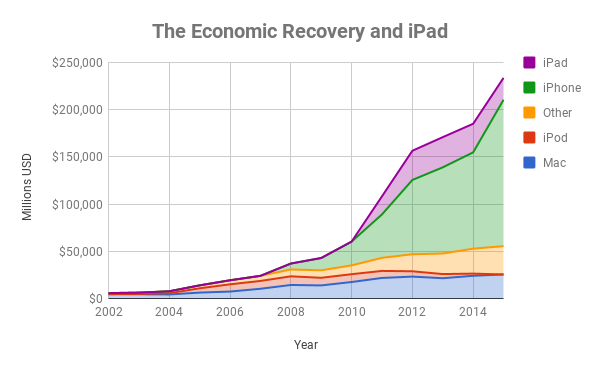 The blowout sales of iPhones -- especially internationally -- led to a huge run-up in Apple's stock. By mid-2015, the company was worth an astounding $750 billion. For fiscal 2015 fiscal, Apple brought in a record-shattering $70 billion in free cash flow. Under the leadership of new CEO Tim Cook -- after Jobs' untimely death -- the company started returning money to shareholders, via both a dividend and share buybacks.

Apple's first flirtation with $1 trillion, however, didn't last long. Between May 2015 and June 2016, the company shed 35% of its value -- and was below $500 billion for the first time since breaching the figure.

The much-touted Apple Watch failed to create anywhere near the material impact on Apple's business that the iPod, iPad, or iPhone did. And while the iPhone 6 was a big seller, many started to doubt the company's ability to create blowout sales year after year.

Indeed, unit sales of the iPhone did fall...as did iPad and Mac sales. 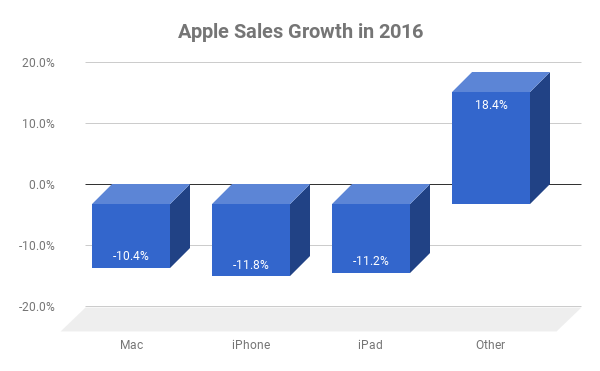 But all was not lost for investors. The one bright spot in 2016 has only become more important as time has gone on. Officially, other revenue includes:

Services especially have become important for Apple. The division has gone from providing $20 billion in high-margin revenue in 2015 to over $33 billion over the past 12 months. 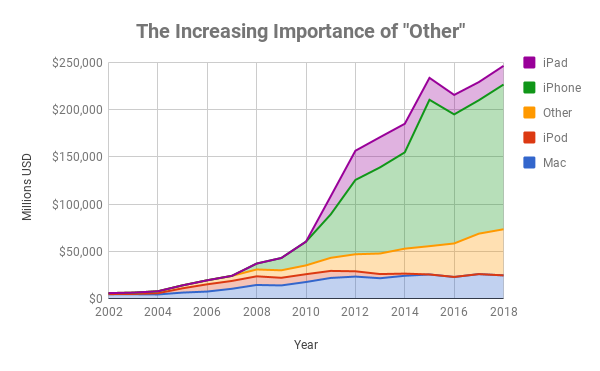 Data source: SEC filings. 2018 results only include the first two fiscal quarters of the year. Chart by author.

That service revenue has another value beyond high-margin sales: It helps build a moat around Apple. Historically, Apple's business model revolved around creating The Next Big Thing over and over again. That works out just fine as long as you have the best product. But over time, the competition is bound to catch up.

That's where services come in. When a person has all of their data stored in iCloud, all of their financial transactions taking place with Apple Pay, and has spent tons of money downloading valuable apps, they are going to think twice before switching to an Android phone and losing all of that.

Perhaps this helps explain why Warren Buffett -- famously nervous about investing in technology stocks -- has become one of Apple's biggest investors.

While I owned the stock throughout much of this run-up, I recently parted ways with my shares in search of better investments. While the services revenue provided the comfort of a moat, I'm just not sure how much growth is left for Apple.

That being said, every investor who has thought the same thing over the past 17 years has lived to regret acting on those thoughts. Given a little time and appreciation, Apple can become the first company to cross a market cap of $1,000,000,000,000. Who's to say that has to be where it ends?